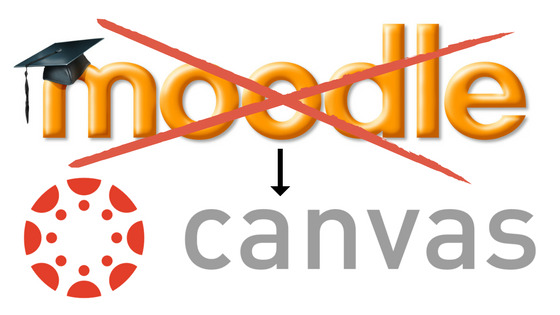 With CSUN’s full transition to Canvas this semester, Moodle is officially a part of the university’s past.

Moodle was introduced to CSUN in 2009 and formally implemented in 2010. The open-source virtual learning management system replaced the discontinued WebCT. At the time of its introduction, Moodle was seen as cutting-edge technology, promising to connect students to their courses anywhere in the world. In addition, Turnitin, which was bundled with Moodle, digitally detected plagiarism within student essays.

Despite CSUN’s dependence on Moodle, it hasn’t always been the most reliable. In 2013, students flooded their professors with emails begging for deadline extensions as Moodle inexplicably went down for an entire night. In addition, consistently scheduled service interruptions by Moodle meant their online classes and homework could be unavailable at inopportune times.

Still, Moodle has been an under-appreciated part of the CSUN experience. It allowed students to check their grades during the semester, provided ways for students to contact their classmates from home and organized class curriculum based on date.

Until last year, Moodle was the second largest online educational provider in the world, ironically surpassed by Canvas.

The shift from Moodle to Canvas was facilitated in Spring 2016 by a CSUN focus group, lead by University Provost Yi Li. Moodle courses from 2016 and 2017 were subsequently converted entirely onto Canvas, although some professors still employed Moodle last semester. According to CSUN’s Canvas page, Canvas is a “modern, open, user-friendly teaching and learning platform for today’s faculty and students”.

While CSUN sees its shift to Canvas as an upgrade, there was one significant advantage for Moodle. As an open-source management system, Moodle was free for CSUN. While there is no transparent information on how much Canvas exactly costs, the Canvas website says it bases fees on “on size, training, support, and other localized factors”. After the one-time quoted price, CSUN will pay an “annual subscription fee” based on the number of its Canvas users.

While Moodle has been purged from CSUN’s undergraduate curriculum, there will be a few select Tseng College courses that will still be employing Moodle until the end of 2018.