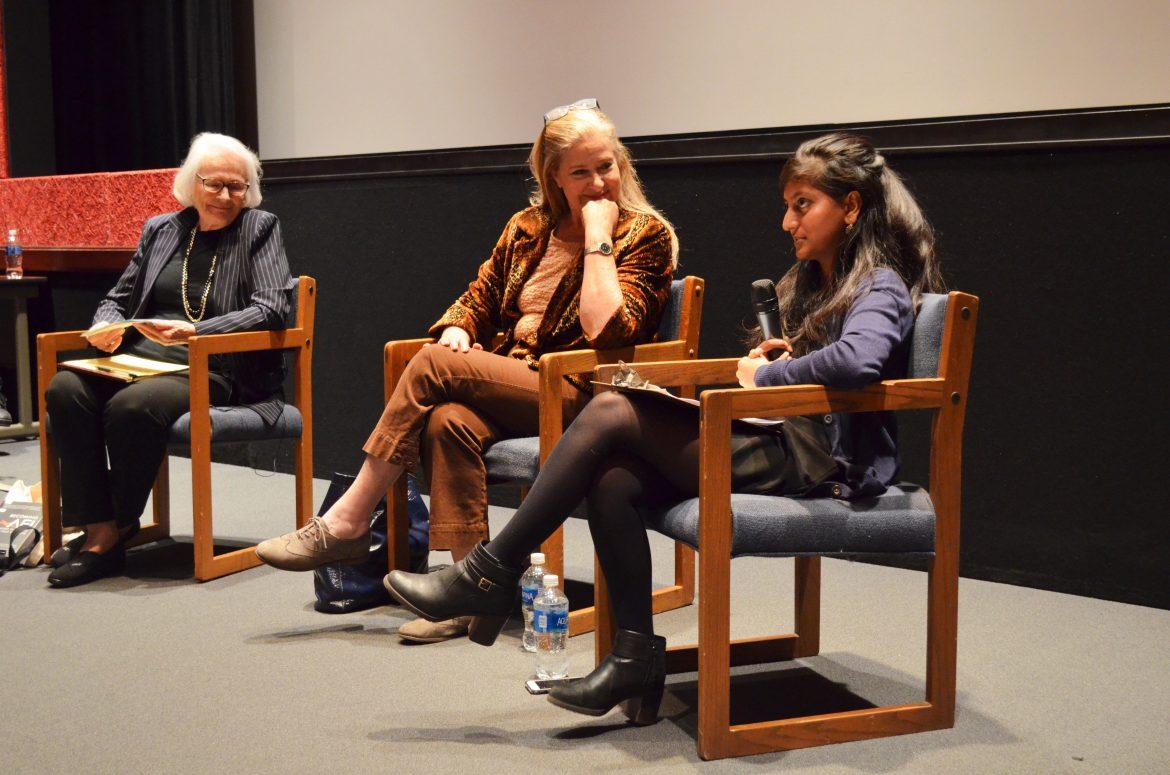 Former AFI President and CEO Jean Picker Firstenberg and filmmaker Lynn Roth look over to CSUN alumni Revati Dhomse as she shares her insight on making it in the entertainment industry. Photo credit: Tamara Syed

The Department of Cinema and Television Arts hosted a panel titled “Women in Film and Television: Creating Paths, Sustaining Careers” featuring industry leaders and CSUN alumni at the Armer screening room on Wednesday.

Creating a safe space for women in the business opened the night’s talks, “Sexism permeates society and it’s something we have to get rid of,” Former American Film Institute (AFI) President and CEO Jean Picker Firstenberg said. She sat alongside independent filmmaker Lynn Roth and Cartoon Network coordinator Revati Dhomse who shared valuable advice and a unique insight on the entertainment industry.

As industry leaders, all three women expressed the powerful effects of going after what you want, “I created my opportunities – I didn’t wait for things to happen,” Roth said.

The writer, producer, and director of 3 independent films Roth believes in the creative drive, “I hate that phrase ‘woman director’, I’m a director. It’s tenacity, these movies had to get made – it’s my creative expression,” Roth said.

A report by the Center for the Study of Women in Television and Film found women represented 8% of directors, 10% of writers, 2% of cinematographers, 24% of producers, and 12% of editors in the top 100 grossing films of 2017.

The speakers each shared their experiences with sexism in the industry.

“When I first started as a writer, my agent wrote a letter to a studio executive that said, ‘She’s a great writer and she has the longest legs in Hollywood!’” Roth said.

Constantly pushing boundaries in her field, Firstenberg is confident that women hold the key to making progress, “I really believe we communicate and learn through storytelling – without women storytellers we can’t change as a society,” Firstenberg said.

A common theme throughout the night was the importance of storytelling and finding your voice as a filmmaker.

“The business has changed – you want to tell stories that relate to you,” Firstenberg said. “It’s so much easier to be successful at writing what you know because then it’s real.”

Dhomse, a CTVA graduate, spoke about the benefits of connecting with faculty and staff.

“The professors here helped me find my voice in college,” Dhomse said. “Keep creating, you slowly cultivate your voice over time.”

Firstenberg, A member of the CSU board of trustees, is proud of the services CSUN has to offer, “You’re attending one of the best programs in America. Your faculty is so dedicated and committed to you. They are here to help you tell the story you want to tell,” Firstenberg said.

Roth has high hopes for the future of women taking on the industry, “Talent really pushes through and doing this together in the years to come – it’ll get better for women, I’m sure of that,” Roth said.

Dhomse believes men have to take initiative in the fight to protect women’s rights, “It shouldn’t only be up to the women to create this shift, guys have to be more conscious of their actions,” Dhomse said.

Currently the coordinator on a new series for Cartoon Network, Dhomse shared her advice to budding filmmakers, “I walked out of here with 11 internships – make it work and create opportunities for yourself,” Dhomse said.

Dhomse held various positions in the field and told future graduates to trust in their paths, even when they jump around. Encouraging students that the industry is journey, not a sprint.

According to Roth, students should be present throughout their academic careers to achieve success, “I think it’s a great time for you to listen and absorb whatever you can drink in at this moment,” Roth said.

A crucial element for a future in the business, Roth regards humility as a valuable tool, “Your willingness to learn and listen when you’re inexperienced is a challenging process but you must commit to this in your early stages of your career,” Roth said.

A round of applause resounded as Firstenberg talked about the current political era, “2016 was one of the worst years in the history of America. I want all of you to promise me you will vote. This is your country and we have to take our country back. If all of you vote, we will,” Firstenberg said.

After their talks, questions were taken from the audience including: “How do you find your creative voice?”

Folding her hands across her lap, Firstenberg replied with a grin, “Life has a lot of chapters, try to think of each chapter as an adventure – each chapter adds to that creative voice.”