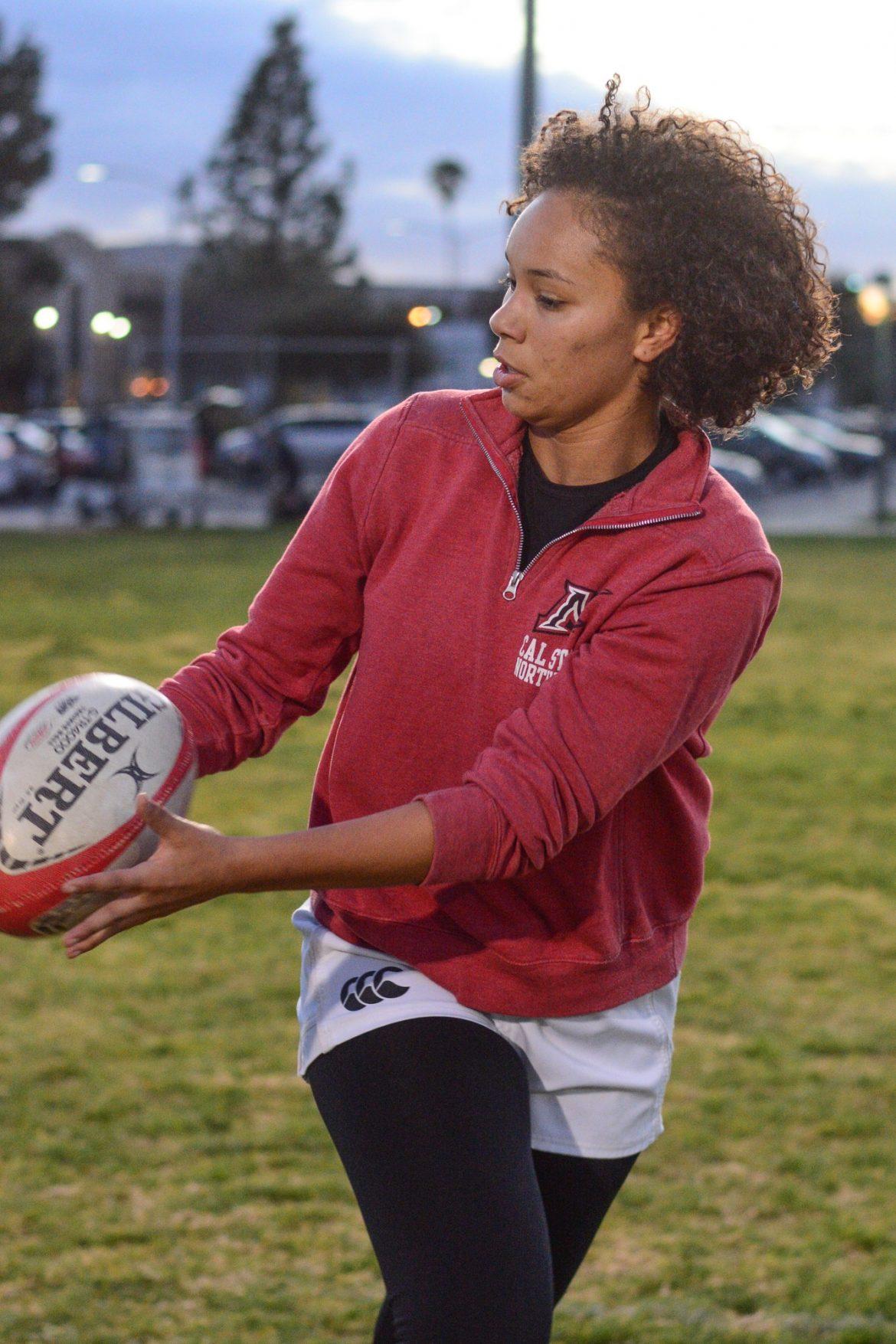 Senior Alyah Thomas is one of the leaders for CSUN women's rugby. Photo credit: Joshua Pacheco

There is no down. There is no set. There is only hard hitting bodies flying everywhere for 80 minutes and 21-year-old CSUN Deaf Studies major Alyah Thomas is leading the charge.

Thomas is one of the team leaders for CSUN’s women’s rugby team but she has her hands in practically every aspect of campus. She participates in multiple clubs, is in a sorority and on Monday mornings she is the Associated Students senator who represents the College of Education. How does Thomas find the balance between student politics and playing one of the most brutal sports?

“It just comes down to how you manage your time,” Thomas said. “I have every hour of every day mapped out. I schedule my study time, I schedule time with my friends and as stupid and as kind of pretentious as that sounds, it keeps me grounded and it keeps me on track for the things I need to do.”

Thomas on the field plays fullback and the position allows her to be both the last line of defense and one of the primary offensive weapons. Thomas at five feet and nine inches has both blinding speed and unrelenting power. She can lower the boom with her shoulders without the ball. With the ball, Thomas can leave her opponents in the dust. Above all, what makes Thomas stand out as a player is her vision according to women’s rugby team President Viviana Garcia.

“(Alyah) really knows how to read the field,” Garcia said. “She is 100 percent there, her tackles are always there all the time. If we pass her the ball, she will just run it through as far as she can and if I can go through a tackle then she will be there to ruck over people.”

Rucking seems to be the style for Thomas which means she will make a tackle and then circle around the ball. When comparing the lethality of how hard the two players hit, Garcia said Thomas and [Garcia] tackle with the same amount of contact, but Thomas’ rucking is better.

“For sure [Alyah] can ruck harder than I do,” Garcia said with a slight grin.

Rugby is a sport that can be more punishing and cruel than other sports. Being down by a large deficit can drain a team’s morale, but that loss of emotion can be doubled after getting tackled nearly every single play. Thomas has been touted as one of the team’s vocal leaders whose motivating words have kept her teams in games no matter what the score is.

“Alyah really motivates us and keeps us going,” Garcia said. “It doesn’t matter what the score is; even if it’s 27-0 she doesn’t let us give up. That’s one of the key things and way everyone looks up to her. She doesn’t give up and she just puts her heart out.

Thomas says the key to striving under the game’s often difficult environment.

“We have a very big emphasis on not getting stuck in a low point,” Thomas said. “There are definitely times where you’re doing really well and all of a sudden the intensity drops. Before you know it, the other team scores three to four times compared to your team’s one. I think it’s mindset of being able to overcome and getting back to the basics, to the things we do well.

Rugby, in a weird twist of fate, has allowed Thomas to hone her skills as a leader. Coming into CSUN, the idea of being an athlete was almost an afterthought until the game found her when she was a freshman.

The sky seems to be the limit for Thomas who graduates at the end of this semester. Her goals are to ultimately become a speech therapist and use sign language as a tool for speech therapy for autistic children.

“I’m working on my capstone research project trying to get the ball rolling and see what kind of research exists within that field on those topics,” Thomas said.

CSUN women’s rugby has just a few months before Thomas graduates. Club Vice President Jessica Shea feels that despite losing one of the team’s key seniors, Thomas’s legacy will help continue to grow the program.

“She’s been one of the those players that’s always been there for us,” Shea said. “It will be sad to lose her but the culture that she has helped this program develop will always be felt.”