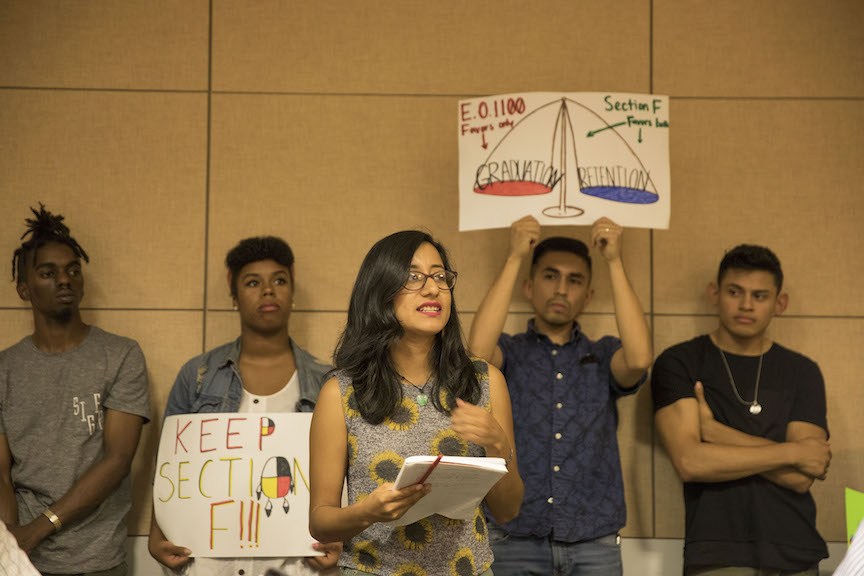 Gloria Rosario Peral, a Chicano Studies Master's student, told her personal story to the Faculty Senate in opposition to executive order 1100 during the week of activism in November.

CSU Chancellor Timothy White issued Executive Order 1100, an order that would eliminate the requirement of ethnic, gender, women’s and cultural classes in Section F along with other changes to the General Education Plan in November.

Since the executive order was issued, President Harrison has assembled a group of students and faculty across the university to look at the G.E. Program and try to discover solutions that address the concerns they share.

“There has to be a way for CSUN to address the G.E. plan,” said Associated Students Vice President Zahraa Khuraibet. “The alternative way to handle that situation was President Harrison and several members of the faculty and students kind of worked together and said ‘let’s create a G.E. taskforce.”

The task force has been working together since November to define their goals and solidify their purpose.

“How do we actually come together in an inclusive, transparent way that shows the richness we have on this campus?”co-chair of the task force and professor of the communication studies, Kathryn Sorrells said. “How do we bring that together to come up with improvements that will really help G.E?”

The main purpose of the task force is to address general education on campus in a public setting. It’s designed with student needs in mind and to provide a balanced representation of faculty and students throughout campus.

“[Students] are concerned about structural inequalities that aren’t just the time it takes to graduate and how much it costs, but about trying to figure out how to exist in this world,” co-chair of the task force and American Indian Studies professor, Brian Burkhart said. “This isn’t just about data and numbers but about the lived experience of students.”

The task force isn’t designed to go around faculty senate or governance or to act as a governing body, but to be public, transparent and inclusive of all. They will work to make recommendations to governing bodies and encourage ideas and change in the G.E. system that is effective for all involved, according to co-chairs Sorrells and Burkhart.

“There was probably 50 people in the room [in the meeting on Friday], there was a certain energy,” Sorrells said. “They were excited to be involved in this, excited about the possibilities, excited to open it up.”