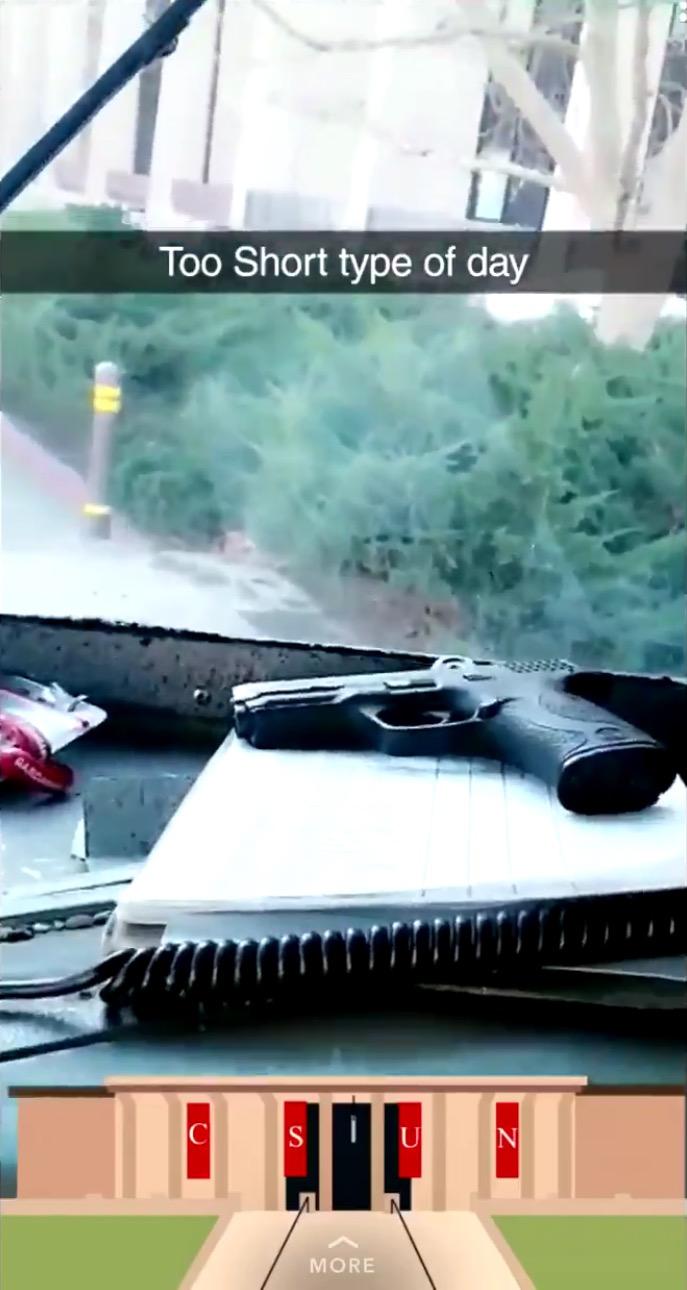 A screenshot of the snapchat video posted to the CSUN story by a security guard with an armored truck company behind the Oviatt Library on Friday. The video was an alleged "hoax" according to CSUN officials.

Campus police responded to calls from students around 11:15 a.m. Friday about a Snapchat post on campus featuring a gun.

The video in question, posted under the #csun hashtag on Snapchat, “depicted a handgun” on top of a dashboard inside a vehicle behind the Oviatt Library and “what appeared to be a radio or wiring from some type of radio” according to Chief of CSUN Police Services, Anne P. Glavin.

The post was captioned “Too Short type of day,” alluding to the rapper Too Short, whose song “Shake that monkey” was playing in the background. However, the text could be interpreted as a “veiled threat of sorts,” Glavin said.

They immediately started investigating, according to Glavin. CSUN notified students around 1 p.m. that officials were aware of the post and police were investigating. Campus remained open and operational.

The community reported to police that they had seen an armored car in the suspected area earlier in the morning. The investigation lead to the identification of a security guard employed by an armored car company who works for the school.

The security guard confessed to his management that he made the post. The guard’s motivation is not evident but Glavin says “this was planned as a hoax.”

“We are going to chase down every avenue to prosecute this person for what they did to even frighten one person,” Glavin explained when asked about what their next course of action is.

Officers questioned what vehicle the user was in while he was recording the post, though the area was identified as nearby Oviatt Library or Jacaranda Hall.

“We [the CSUN police], from the beginning, felt that this just wasn’t adding up. It did look a bit staged to us, however we still treated it very seriously.”

Officers and a K-9 unit were sent out to investigate, but found no evidence or leads at the scene. The Los Angeles Police Department (LAPD) checked the scene as well, with helicopters circling the campus, but found “no evidence to substantiate the report.”

Glavin extends her thanks to the members of the CSUN community for calling in with information because “that ultimately led to the solving of this case.”

Detectives are currently questioning the suspect.

This is an on-going story, we will update it when more information is available.