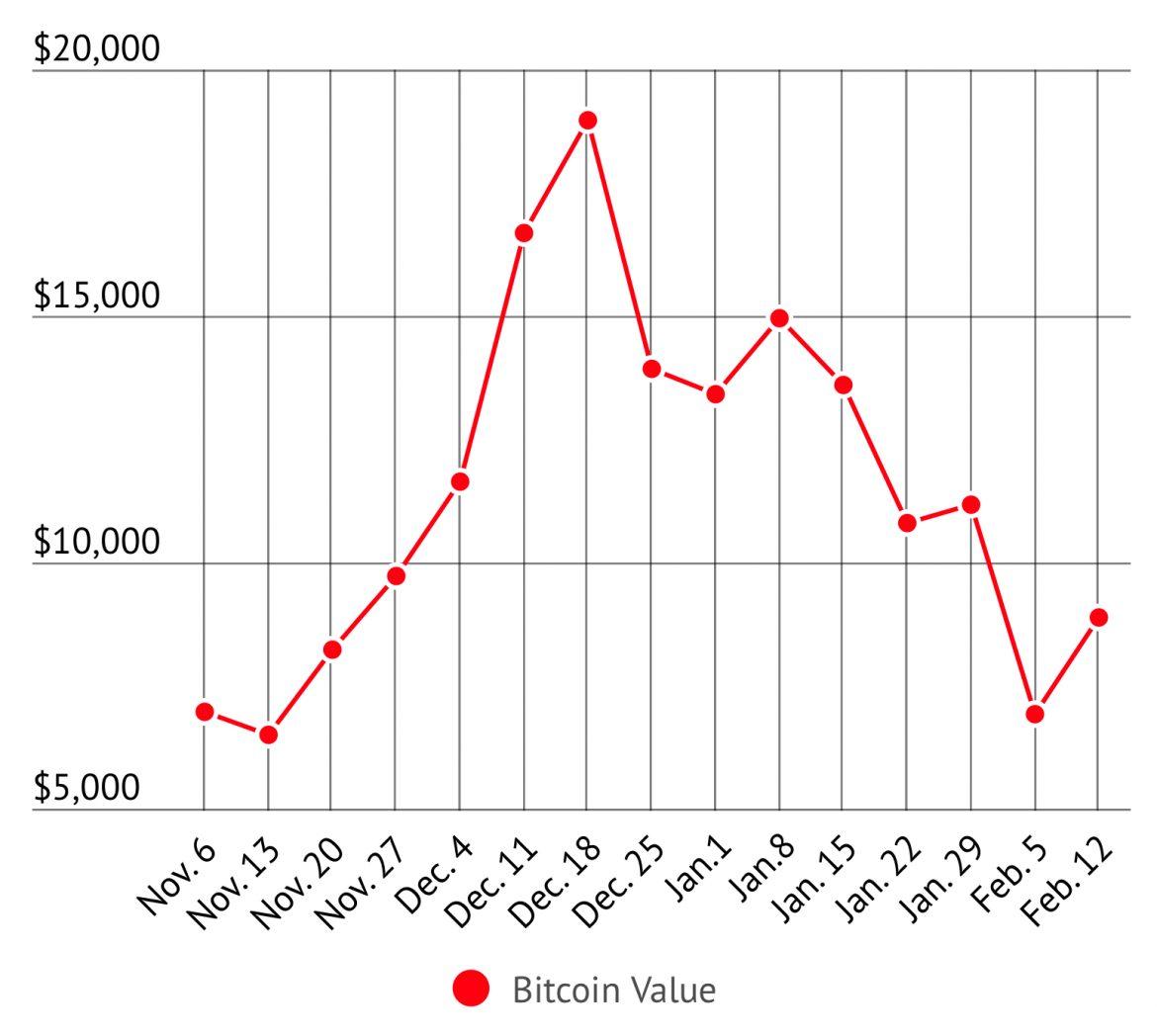 Bitcoin, the most prominent cryptocurrency on the market, plunged to $6,900 on Feb. 5, its lowest since mid-November. It recovered over the week but is still far from the over $19,000 value it had when it peaked on Dec. 16.

Cryptocurrency is a virtual currency that is exchanged through peer-to-peer transactions, which means it does not go through any banks, governments or financial institutions. They are saved in a digital wallet which a person can save in their computer, device or store in their cloud drive so they can access it anywhere in the world using a 34-character address that consists of numbers and letters.

When a transaction is made using virtual currency, it goes to a decentralized network of computers all over the globe, encryption techniques are then used to validate the transaction. A validated transaction consist of the currency itself and also contracts, records and other information. The validated transactions are combined to make a “block” that is added to the already existing ledger called a “blockchain,” thus the name blockchain technology.

Michael Sedillo, computer information technology student at CSUN, has invested in cryptocurrencies for the past year. Sedillo works for a software company that develops security for companies. His enthusiasm for emerging technology is what captured his interest for blockchain technology.

Sedillo believes there are many benefits of a digital currency.

“It’s security, for one. It’s globally powered so there’s no single point of failure. Even if several computers blackout, the whole system is not going to fail,” Sedillo said. “Also, the speed. If I send money to someone across the globe they can get it in seconds or minutes — depending on the kind of cryptocurrency I use. It’s better than having to wait hours or days for a bank transfer.”

Terrell Byrd, a computer science major, has invested in cryptocurrencies since 2016. Initially interested in the blockchain technology itself, he started educating himself on it and saw a lot of potential in this venture.

“Virtual currency cuts out the middleman and allows users to send money or pay for goods with essentially no fee,” Byrd said. “Blockchain also offers transparency which lets the community of users see every transaction or currency sent. This eliminates forgery or discrepancies amongst users and receivers.”

In early January, the total market value of all publicly traded cryptocurrencies reached its peak at $830 billion. The market dropped to $276 billion on Feb. 6, its lowest since late November. This uncertainty led skeptics to believe that the cryptocurrency market is a bubble that will eventually burst.

“I don’t see a lot of long run economic value and I think this might be characterized as a bubble,” finance professor, James Dow said. “In a bubble everything is driven by people’s expectations of the future — what they think is going to happen — and if they’re confident, the price goes up and if they’re not confident, the price goes down. Confidence can shift very quickly one way or the other.”

The lack of regulation in the cryptocurrency market is another concern. There are currently no agencies that oversee any form of virtual currency.

“It’s very easy for people to get scammed and lose their money,” Dow said. “We have these regulations to protect investors — to make sure that the people can’t just take the money, that they need to report what they’re doing and give some power to the investors. In the long run, SEC regulation will be good for this.”

In a hearing before the Senate Banking Committee on Feb. 6, both chairman of the Securities and Exchange Commission (SEC) and Commodity Futures Trading Commission (CFTC), voiced their worries about the lack of market regulation and what it means for the future of the virtual currency industry.

Currently, there are over 100,000 merchants globally that accept Bitcoin as payment. In the United States, Microsoft, Expedia and Overstock are the most known businesses to accept cryptocurrency payment. There are also debit cards such as Xapo, Shift Card and Wirex that let you load your digital currencies into a physical card so that you can use it in stores.