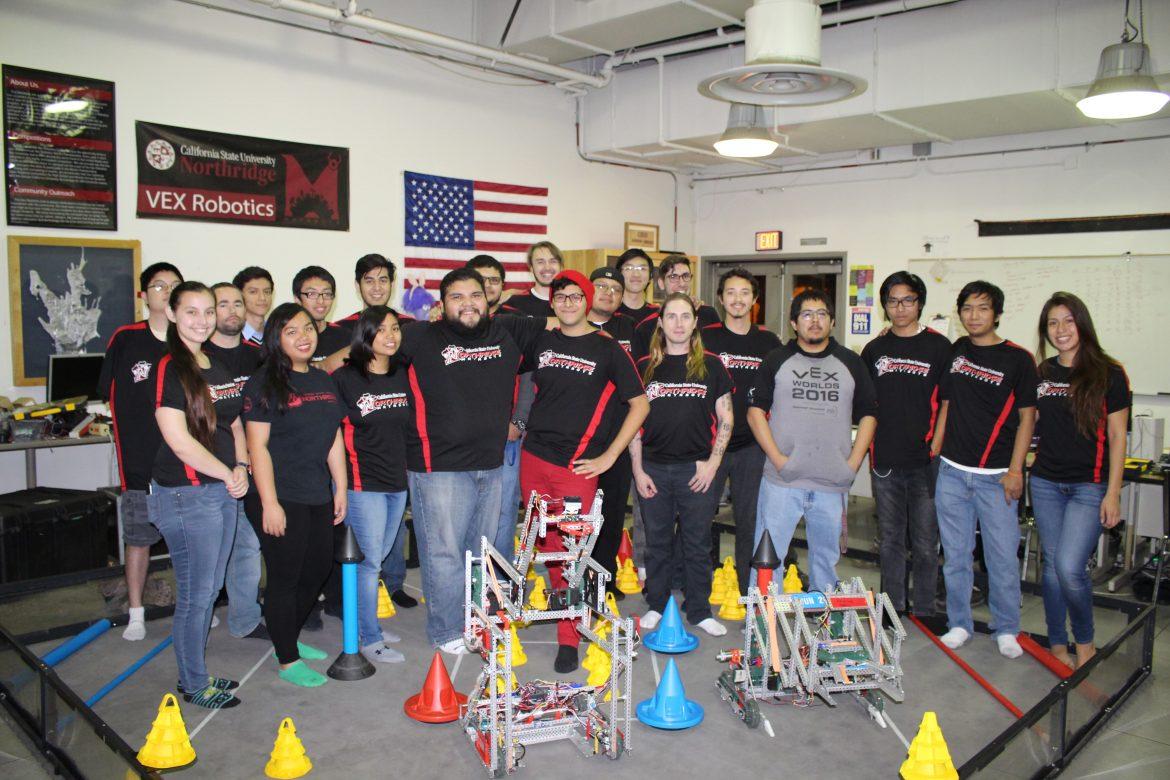 The Vex Robotics team, or Matabots, stand in front of their two robots in team photo provided by Steven Paqueo.

The CSUN VEX Robotics Club, otherwise known as the Matabots, is headed to the VEX Robotics World Championship in Louisville, Kentucky on April 25-29. They will be competing with over 80 teams from all over the world.

The Matabots have two robots — CSUN1 and CSUN2 — that compete in regional tournaments where they battle against college teams from California. Club President, Steven Paqueo, a 23-year-old mechanical engineering student, said that CSUN1 is headed by their veteran members while CSUN2 is headed by their rookie team.

“For the past three years we’ve been working really hard on making robots that not just move or work but that really excel in what they do,” Paqueo said. “It’s not enough for us that things just move, we want to be at the top.”

CSUN1 came out as the champion of a qualifying tournament held at CSUN on Jan. 13 where they went undefeated. CSUN2 will compete in the last regional event of the season on Feb. 24 at the University of Southern California in the hopes of also qualifying for the world championship.

Over 300 college teams from around the globe are registered for VEX Robotics World Championship but only 84 teams get to compete. CSUN1 currently ranks 13th in the world skills standings where they compute the scores from all college division VEX events.

Rookie team member Pablo Lepe, a 21-year-old computer science major, is going to the world championship for the first time. He is confident that the team will do great in the tournament.

“I see great potential in our team. We really have a strong leadership and we have the ability to continue pushing that limit of what we’ve done,” Lepe said. “It’s stressful but at the same time it has a relief at the end. Whether I win or lose, I’m a part of this community and it’s very motivational for me. It feels really nice to be a part of something that I can contribute to.”

The challenges change every year so the team needs to build new robots each season that are specifically designed for the competition.

“They release the new challenge right at the end of world championship. So the moment that one season ends, the next season starts – our season never ends,” Paqueo said. “Our freshmen were designing the robots, at the competition, as soon as it ended.”

The Matabots build around five robots each year, continually changing and evolving the design and functions to maximize the potential for winning.

The club’s best run was in 2016 where they placed fifth in their division at the world championship and got as far as the semi-finals. The team is hopeful that they have a great chance of making it far this season.

Nathan Boyd, 20-year-old mechanical engineering student, has been with the team for three years. Boyd is the programming team lead and has been competing in robotic events since he was in junior high.

“I feel very confident. We’ve been pushing our boundaries in the past couple of years,” Boyd said. “The competition is very focused in design and programming, two things that we have. I think we can do a really good job this year and shoot for top 10.”

The Matabots have about 30 members this year which is divided into two groups: programming and design. The programming team deals with the coding that makes the robots run and do tasks. The design team focuses on the engineering aspect of building the robots.

The club is open to all students, even those without a background in robotics or programming. The group also does workshops and teach students from middle school to high school about competitive robotics and the technology behind it.

I felt welcome since day one, you’re not expected to know anything,” former club president and mechanical engineering senior, Adrian Castellon, said. “You can have no knowledge of robotics, as long as you put the passion and time into it. If you have an open mind and [will] to learn about robotics, that’s all they really care about.”

Update: The article was updated to include a Matabot team photo.