Roadkill and Other Art at CSUN Gallery 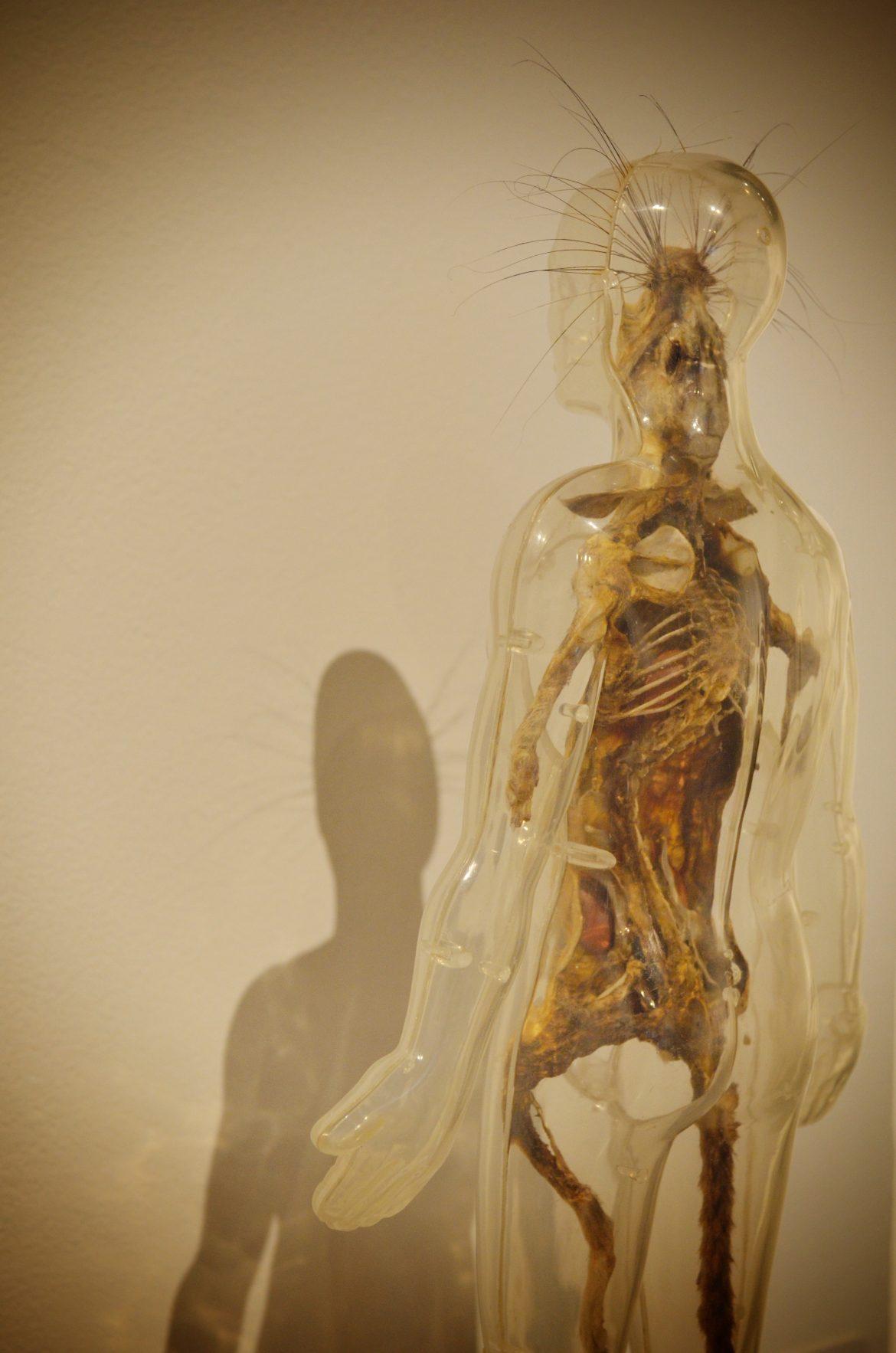 The death of animals can be a touching subject and one that spans many aspects of the human experience with anything from pet ownership to industrially-farmed livestock. The CSUN Main Art Gallery is playing host to an all-new exhibit, “Remembering Animals,” curated by Professor Julia Schlosser, which delves into the deepest corners of human sentiment towards past lives of humankind’s closest animals.

Schlosser began her journey of creating this exhibit in 2011 when her pet rabbit, Claire, was diagnosed with a painful bone disease. Schlosser, a photographer and art historian, began creating images reflecting her own pain as she was deciding to end Claire’s. Schlosser found that end-of-life experiences extended far and wide among other artists who also used the subject as a coping mechanism or as a vehicle to demonstrate the gravity of an important issue.

Remembering Animals opened on Feb. 10, with a reception that gave attendees the opportunity to mingle with several of the show’s featured artists, some traveling from as far as Florida to attend.

Among those at the reception was psychologist and artist, Dr. Linda Brant, who took time away from her private practice in Orlando, Florida to showcase her work honoring animals that are not often mourned. Among her pieces on display are several sculptures carved from cattle bone penetrated by a human bone needle with a finely braided thread constructed from nine hairs from Brant’s own head. The exhibit is meant to draw upon the interaction between man and farmed animals, a relationship that can seem vastly one-sided.

Artist Sarah Perry was present with several pieces from her collection, several featuring taxidermied animals or animal parts. One of her pieces on display, “99 Birds,” is a fencing sword on which rest the feet (and only the feet) of six English house sparrows. The exhibit’s namesake is a play off the song “99 Bottles” with birds disappearing one-by-one.

Ex-CSUN adjunct professor and street artist Craig Stecyk was on-hand with photographs from his 1983 installments entitled “Road Rash.” Stecyk began his study of roadkill in the 1970s and developed his 1983 series as a response to the clash between mechanized human society and that of the animals ill-suited to compete. Stecyk’s Road Rash pieces were produced using a portable foundry he carried in his truck as he traveled all over California and beyond. Stecyk would find a dead animal, document its position, cast its guts with the foundry equipment, place the resulting bronze back in the animal’s skin, and replace the animal at its location of death to serve as a semi-permanent monument to itself, and others that were slain thoughtlessly on the road. Stecyk recalled a time he was out looking for subjects in the empty land surrounding CSUN when campus police found him and asked what he was up to.

“They said something like ‘That looks like some good eating you got there.’ I guess they didn’t believe me when I told them what I was doing,” Stecyk said.

Artist and Photographer Emma Kisiel showcased her work which bore a marked resemblance in concept to Stecyk’s. Kisiel was amazed to have never been familiar with Stecyk’s work since her collegiate focus was on roadkill art. “And Craig’s like the O.G. of roadkill!” Kisiel said. Some of Kisiel’s images are of killed animals she would find and move off-road, placing the animals in a peaceful gesture and adorning with nearby natural flowers, rocks, and other ornaments. Kisiel’s “Sylvilagus Floridanus” won the cover of the exhibition’s mailer and companion booklet featuring a baby rabbit she saw die.

Perhaps the most innovative display is the digital candle-lighting experience “Anilum” created by Julia Schlosser and Joe Bautista. The project invites people worldwide to share their experiences of animal loss by posting a memorial. Entries were projected on a museum wall that could be scrolled by hand gesture over a sensor. “This exhibit is not just a ‘Hey, here’s a bunch of dead animals.’ This is a way to ease in,” Schlosser said.

Remembering Animals exhibits will be on display at the CSUN Main Gallery until March 17, 2018.