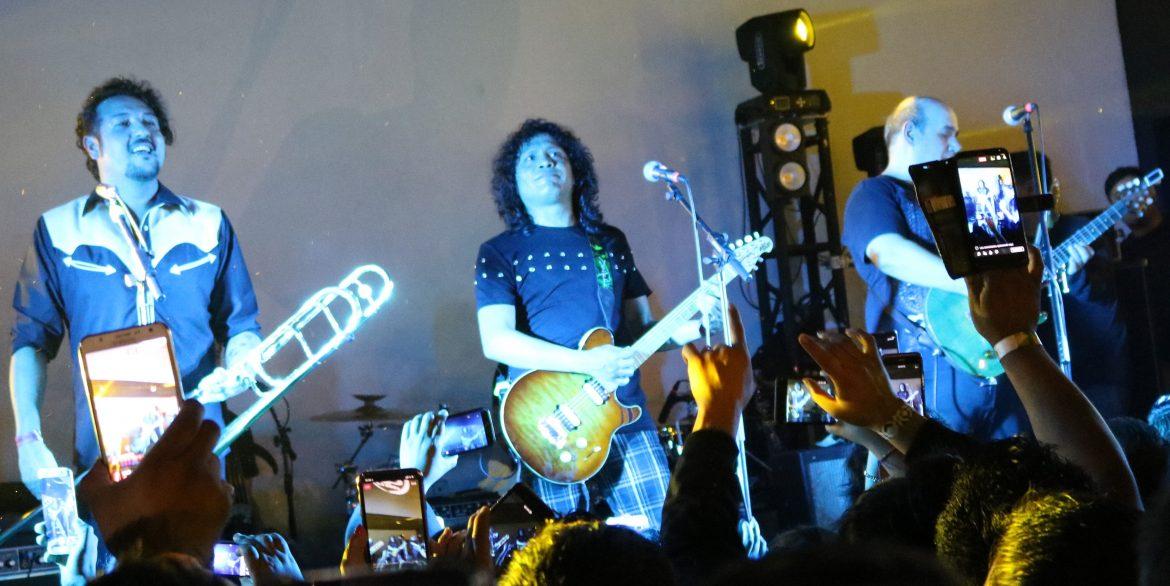 When talking about classic Mexican rock there are always certain bands that will always be mentioned due to their international fame. Among the handful of them, it will be very hard to find the name of El Haragán y Compañia. These past few weeks however, his band played live in LA and other cities across the U.S. His performance was a clear example of the impact rock and roll had in non-English-speaking countries.

Luis “El Haragán” Alvarez finds his influence from American artists. “It is Elvis’s fault,” he answered when asked about his main influence that made him pursue a musical career. Even though his band recreated a sound of pure rock and roll influenced by the American Rhythm and Blues of the ’70s, the group found it difficult to break into the mainstream.

Throughout that decade rock in Mexico was completely banned from media outlets. By the time El Haragán began making music in the late 1980s he faced the challenge of playing alongside other groups that leaned towards more electronic pop sounds.

One of the band’s classics is the song “El No Lo Mato” (“He didn’t kill him”) which tells the story of a seventeen-year-old killed at the hands of a police man. “I dedicate myself to the feelings of people,” he said, referring to his lyrical style. “They are direct songs because since I started El Haragán, I wanted to do something real. I wanted to talk about something real.”

What El Haragán mentions is supported by “El No Lo Mato” or his song “Urbanidad” which talks about the daily living in the poor side of Mexico City. One simple line in his lyrics is all it takes to capture day-to-day activities like riding public transportation: “suele suceder que alguna vez ¡ se te va el camión !” (“It happens often; you miss the bus at least once”).

Although it is likely that listeners will encounter his music under the Rock Urbano label, El Haragán and many other musicians playing this music have a negative view of it. The term refers to all those bands that surfaced in Mexico from very poor neighborhoods–specifically in the Mexico City area–such as Nezahualcoyotl or in the case of El Haragán, Valle Gómez. These audiences adapted the style of punk-rockers. Just like The Ramones dressed with tight denim jeans, black Converse shoes and black leather jackets, the followers of bands like El Haragán y Compañia dressed the same way.

“We played Rock during the ’80s. We simply called it Rock,” he said, correcting me after being asked about his involvement in the Rock Urbano scene. “Suddenly, other companies begin creating subgenres of Mexican Rock, but their groups were Mexican Rock. Out of nowhere, Mana is Rock when we all know they’re a pop band.”

El Haragán is referring to one of the most famous bands of Mexico. Their song “Oye Mi Amor” is heard almost in every party that has a Rock in Spanish segment, but El Haragán considers it pop music, not real rock and roll. When compared, Mana’s song has a more danceable sound to it that didn’t fit in with what El Haragán was producing.

Having been labeled as Rock Urbano by companies like Televisa hurt his ability to ever break into the mainstream.

Nevertheless, after 30 years of musical legacy, he is playing once again this year in one of the biggest Music Festivals of Mexico, Vive Latino. In this festival, he is playing at the same time that British band Gorillaz will play in another stage.

“It’s a huge challenge. They have marketing at an international level. So it is very likely everyone will go see them, but if the audience is well-spread out then it means we have strength left, so we will make something really special for that day.”

Another of his plans is to make another album this year. Check out some of his classic songs, available on Spotify.