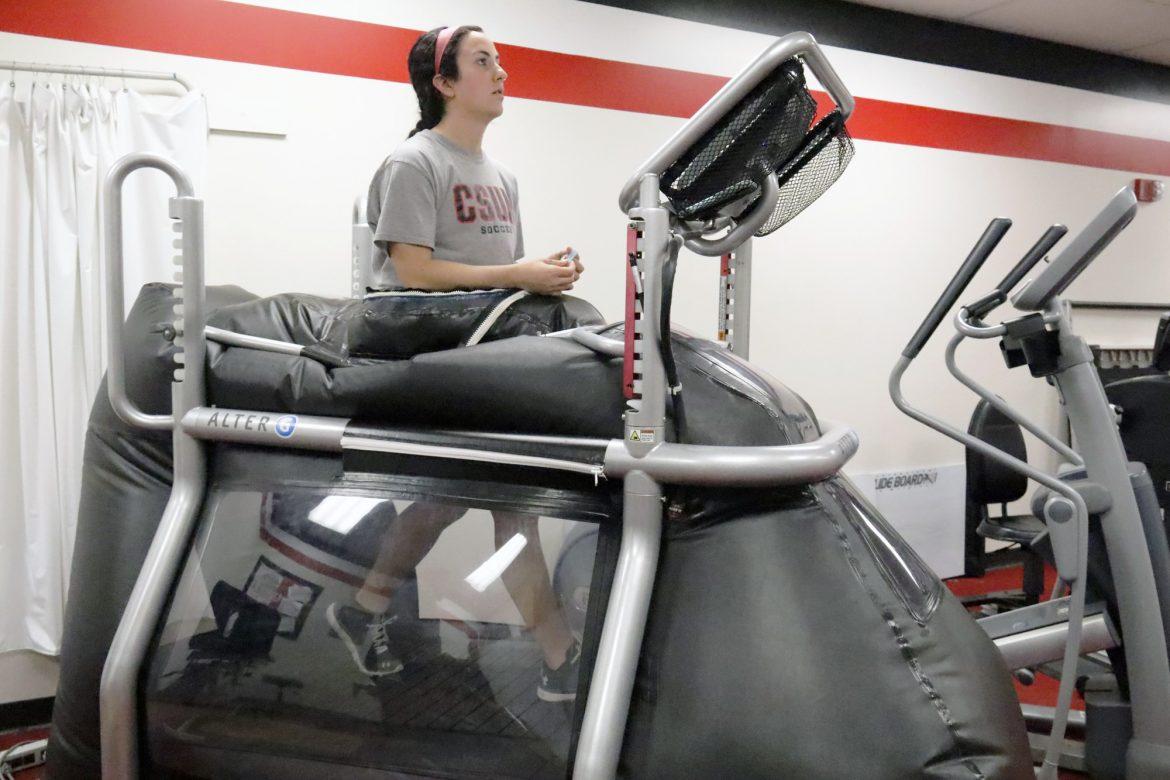 Soccer player Amber Edemann going through a cardio work in an anti-gravitational treadmill that reduces the pressure on her injured knee. Photo credit: Kelcey Henderson

CSUN women’s soccer player Amber Edemann was running full speed when she was hit awkwardly and left writhing on the field. Edemann dislocated the patella in her knee in a 2017 game against Hawaii.

Edemann’s dislocated patella required her to undergo the third knee surgery of her athletic career.

“Recovery wise this is the longest injury I have had to go through,” Edemann said. “The hardest part is not being able to go out there and grind with my team.”

Luckily for Edemann, recovery is no longer a miracle. Edemann is just one of a series of athletes around the country who are going through the rehabilitation process with new technologies and techniques that exist sports medicine today.

CSUN Director of Sports Medicine, Steven Grech, has been the Matadors’ head trainer for 12 years and has seen many changes.

“Sports medicine has advanced a lot in the past 20 years, but looking at how athletes train is probably one of the biggest things to look at,” Grech said. “Obviously there was a time when athletes just changed in season and if you look at now like an advent of two-a-days, that was essentially meant for athletes to get in shape. Now if you’re participating in that sport, you are participating in it year around.”

Two decades ago, the way an athlete was trained and the way trainers treated athletes was much different. With new data and analytics, conditioning and treatment go hand and hand.

“There used to be a time where our women’s soccer team had a high rate of ACL tears so I researched what we could be doing from a proactive standpoint to prevent these injuries. 10-15 years ago there wasn’t anything specific we could agree on how these injuries could be prevented,” Grech said. “Now the latest research out there shows that we can do hip strengthening. The gluteus maximus and muscles above the hip have one sufficient range of motion. If the torque of the hip is stronger, it causes less stress to the knee.”

Edemann runs in anti-gravitational treadmill, a recovery and workout tool that was originally licensed by NASA in 2005. It is now being used to help train athletes who have dealt with impact injuries.

The treadmill has allowed her to stay in better condition. If Edemann has suffered the injury five years ago, her recovery would have included resting for a year and potentially painful physical therapy. The treadmill allows her to walk with less pain, without complete pressure on her knee.

“What the treadmill does is first get your body weight and then you can work in different percentages of body weight,” Brandt said. “It’s a way that we can deload people and work on some gate training, work on some cardio and try to get things moving a little quicker as far as injury recovery.

Baseball is a sport where training and injury prevention are coexistent with one another. One of the problems that occur, especially with young baseball, is overuse. Instead of playing sports that are in season, children are on travel teams. The practices are at least three times a week, plus tournaments that can include anywhere between four to six games in a weekend. In some cases, there are three games played in only one day.

CSUN baseball trainer Tanner Fowler, says the result can be severe because of arms getting overused.

“I just recently attended a clinic and there was a statistic showing those who pitched more then eight months out of the year were five times more likely to get injured,” Fowler said. “Pitching-wise that does not mean shutting it down completely, but I do think it is a good rule of thumb to go by. I think watching your pitch out and innings and watching your guys so they can finish the season strong especially at a professional level can help.”

Advancements have been made in baseball with Division schools having specific throwing programs designed to improve strength while maintaining sustainability when enduring a 55 game season. Armbands used core training and arm strengthening are essential for baseball programs at every level.

“The arm care we have seen now and the maintenance through a season along with flush workouts is one of the biggest changes we’ve seen, especially as trainers,” Fowler said. “Flush workouts allow a pitcher to go out there, pitch seven or eight innings and then do some cardio to stop the build up of lactic acid. Some of the brace procedures that are being done now are helping reduce arm surgeries that used to take nine to 16 months of recovery and cutting it down to eight months.

Even with trainers and strength and conditioning coaches making injury prevention a focus, athletes at some point will get hurt. CSUN has put an emphasis on being funded and have one of the most advanced training centers in the entire Big West Conference.

Edemann, who was a starting defender last season, will continue the recovery process during the coming months and will have to redshirt in 2018. Despite the arduous journey ahead, Edemann wants to make sure she comes back stronger and better then before.

“My biggest support has been Matt [Brandt]. He comes into see me for three to four hours on Saturday just doing rehab and he helps with the mental side of it and the emotional side of it too,” Edemann said.

Grech, Brandt and Fowler are just a handful of trainers on staff along with the various technologies and techniques that allow CSUN athletes to make a full and quick recovery.