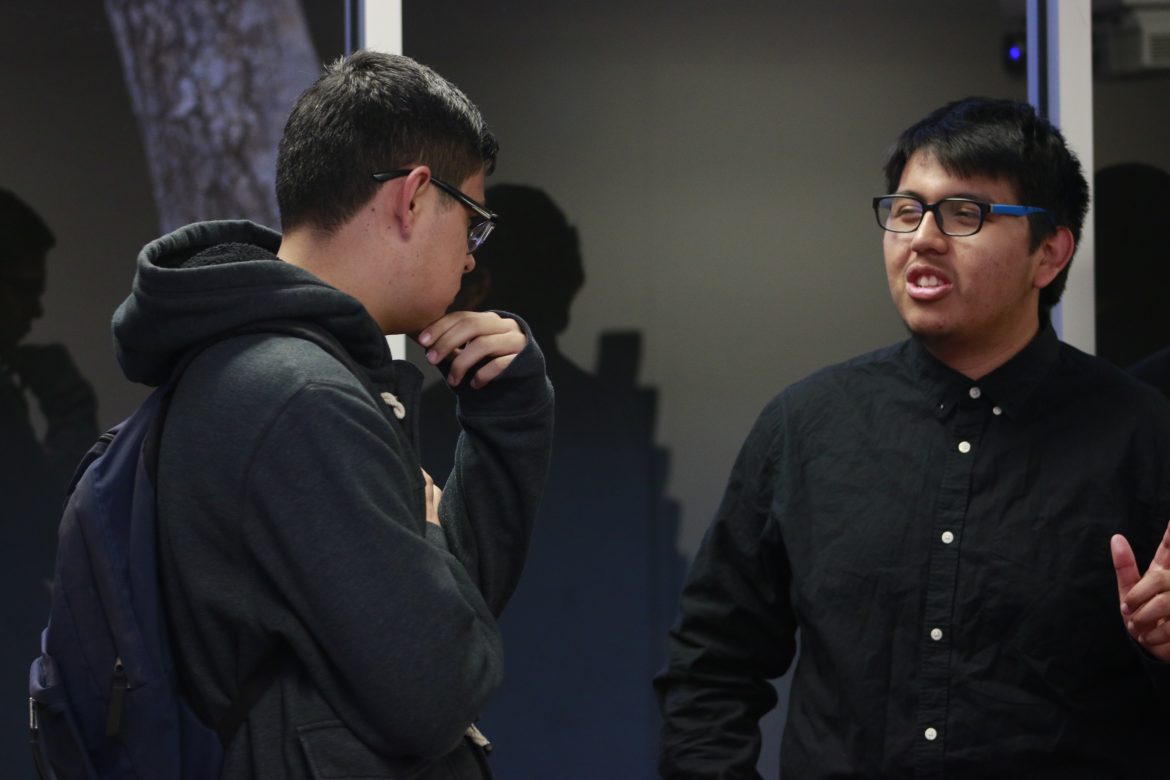 Miguel Guerrero, 18, an Electrical Engineering major (right) and Jeremy Perez (left), 20, an Computer Engineering major, conversing before an event held by the Society of Hispanic Professional Engineers. Guerrero said afterwards that it was good to see "other Hispanics out there in Engineering." Photo credit: Clare Calzada

The students from underserved communities graduate at significantly lower rates in science, technology, engineering and mathematics (STEM) majors than their counterparts from better-served communities at CSUN, according to the most recent data compiled in the CSU Student Success Dashboard, from 2000 to 2010.

“There is no single fix to this problem. It really is a matter of changing culture, interrupting and dismantling racism and bias — unconscious and conscious,” Kristy Michaud, director of the Office of Student Success Innovations, said. “I think, in Higher Ed, we tend to view ourselves as immune to bias and we’re certainly not.”

Of the 22 campuses in the CSU system, CSUN has the lowest 6-year graduation rate for underserved students in STEM majors, according to the CSU Student Success Dashboard.

Michaud refuses to accept the notion that students from traditionally underserved communities struggle because their high schools fail to prepare them.

“We can’t use that as an excuse for not serving our students once they are here… once we accept the students we have said ‘we believe you can succeed here’ and so it becomes our responsibility to do what we can to help them succeed here, even if they come in unprepared,” Michaud said.

The push to increase graduation rates for underserved students with declared STEM majors has been included with the recent efforts to improve four year graduation rates, that are 13 percent, for all students across all colleges and majors on campus.

Michaud’s office was created in June 2016 to evaluate achievement gaps and the efficacy of programs on campus. It is one of the few entities dedicated to developing initiatives to combat low graduation rates for students from underserved communities in particular.

Fourth-year computer science major and President of the Society of Hispanic Engineers, Alejandro Martinez, feels that there is an overall lack of encouragement for underserved students to complete their studies in STEM fields.

“CSUN has not created as many programs in order to motivate students to keep going,” Martinez said. “A lot of it is ‘Oh, well you didn’t make it here so let’s put you somewhere else’ and I think the school… keeps motivating you to stay in school, but it doesn’t motivate you to, kind of, stay in your field of choice.”

Martinez largely attributes his willingness to complete his STEM degree to engagement in his club, “A big thing is, for example, the clubs. They motivate you.”

“A lot of the research shows that a major factor with the traditionally underserved communities would be a feeling of engagement and sort of belonging to the campus,” David Gray, an associate dean of the College of Science and Mathematics said. “The question is about… having a welcoming and encouraging academic environment instead of a discouraging one.”

The College of Engineering and Computer Science also has made recent efforts to address low graduation rates including “Summer Skills Workshop for First-Time Freshmen, an Early STEM Summer Math program, and special sections of high D/F/U lower division courses in Fall 2018,” according to Dr. Hamid Johari, dean of the college.