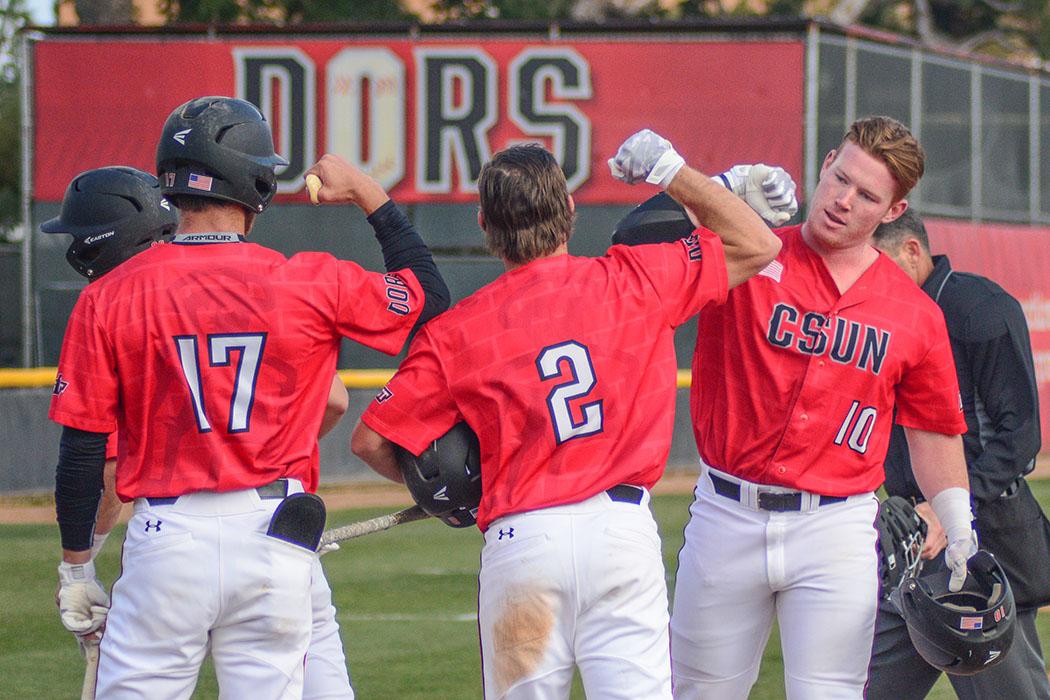 Senior Albee Weiss (10) celebrates at the plate with Joey Cooper (2) and Kevin Riley (17) after a 3-run home run in the third inning vs BYU (Photo credit: Joshua Pacheco)

Matador baseball finally returns as CSUN drops three out of four tight games to BYU to open the 2018 season.

Coach Greg Moore enters his fifth season with the Matadors and the team is seeking its first Big West title in 16 years.

The Matadors dropped a close 5-3 game Friday to open the series against the Cougars. The next day CSUN took game one of the double header and then dropped the second and the season finale.

“We play a tough schedule each year,” Moore said. “We see it as a chance to have some of the best amateur baseball in the country right here on CSUN’s campus. And our team thrives on the challenge.”

The Matadors have improved their conference record each year in Moore’s tenure and look to build off of last season’s 26-29 record while finishing fourth in the Big West Conference in 2017.

Starting pitcher Tei Vanderford finished last season with a team-high 98 innings on the mound and feels his team will be able to go deeper into games.

“We have a lot more depth,” Vanderford said. “I think our starting pitching isn’t gonna have to necessarily go seven or eight innings every game.”

The ace Vanderford started game one for the Matadors. Vanderford pitched six innings with three earned runs and two strikeouts.

Albee Weiss started the season by hitting three home runs against the Cougars.

The Big West has shown to be a tough division in baseball with a familiar face typically at the top.

Conference rival Cal State Fullerton has won 12 titles since 2000 including a National Championship in 2004.

“Challenges are great and expectations are high,” coach Moore said. “We don’t spend much time comparing our team to other teams in this league. I want the conference to thrive. For that to happen we need to play our best baseball both in and out of Big West play.”

Senior outfielder Riley Conlan is feeling confident about his team going into his last season.

“We have a really talented group of guys,” Conlan said. “Our hitters are hitting ball left and right, one through nine, even on the bench. Its explosive. Its really good to see. We’re really confident going into this year.”

BYU returned to Matador Field for the first time in three years. CSUN erased a six run deficit to win 10-8 in the previous 2015 meeting. But these are two very different teams as BYU took three of four games.

“BYU is a really good team, they won their conference last year,” Vanderford said. “Its going to be a measure of where we’re at as a team.”

Although CSUN seems to have addressed all the team’s issues from last season many analysts have counted the Matadors out.

The team is projected to win 33 games according to D1baseball.com but still finish in the bottom half of the stacked Big West.

Last year the team dropped five out of eight Big West series matchups. The team however proved their worth in beating all but one opponent they faced last season at least once.

“We watched some teams we beat make it to the College World Series last year,” said Vanderford. “It’s painful when you know you’re just as good as these teams and you’re watching on your couch.”

The Matadors next opponent will be the Manhattan Jaspers who come to Northridge for a three game weekend series. The first pitch is at 2 p.m. on Friday.