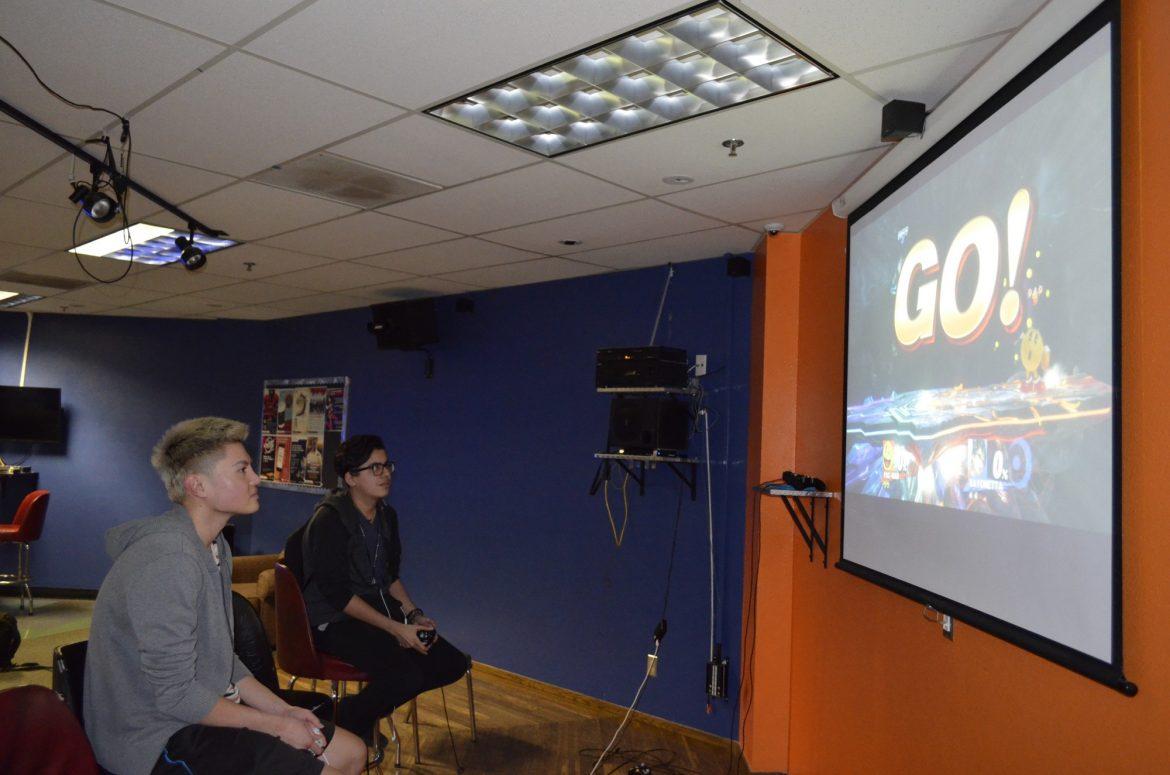 Jeff Pote (left) prepares to take on Chris Saldana in his last bid for the final round. Photo credit: Nick Rose

Contestants got super smashed by the winner Chris Saldana and his characters, Zero Suit Samus and Pac-Man, at the USU Games Room for the first “Super Smash Bros. for Wii U” video game tournament of the semester.

Ten contestants, several of whom learned about the event moments before the start, joined the fray to pit their gaming prowess and favorite characters from the Nintendo universe against one another in a double-elimination, match-style tournament.

“Super Smash Bros. for Wii U” is the latest generation of the Nintendo line which features gameplay geared around knocking other players off a stage as opposed to typical fighting games which are straightforward brawls.

Preliminary rounds were played in best-of-three match-ups which quickly sorted half the field into the loser’s bracket.

CSUN wrestler Brian Iguaran happened upon the tournament after a workout and decided to try his luck drawing upon experience with the game dating back to the original “Super Smash Bros.” game that debuted on Nintendo 64 in 1999.

“I think I’ll be fine,” Iguaran said watching a pregame warm-up round.

Iguaran was unfortunately served back-to-back losses, placing him in the spectator’s gallery for the remainder of the night.

Saldana, a freshman, also entered the competition with a great degree of confidence having played the game about three times a week since it came out. Saldana said Pac-Man is his go-to character owing to his array of special items that are difficult for opponents to defend against.

Saldana began the tournament using Zero Suit Samus, often referred to as ZSS, earning himself early victories in the prelims amidst gasps from the crowd spurred by Saldana’s talented execution of technical moves.

When asked why Saldana did not play his favorite character, Saldana replied, “I’m saving him for the final.”

Saldana’s friend Jiancarlo Lozada entered the competition, losing in the first round, but earning his way back to the quarter-finals.

When it was brought to his attention that Lozada could have to face his friend in the final round, he humbly conceded, “We all know what would happen.”

Contestant Christian Martinez was also impressed with Saldana’s performance as he watched the prelim match-up.

“He reads the other player, he really knows how to play competitive ZSS,” Martinez said. “I’m afraid.”

Lozada was the only player of the night to use his Nintendo 3DS as a wireless controller for the Wii game, since he originally began playing the companion game “Super Smash Bros. for 3DS.”

Lozada would ultimately be shut down by Augustine Martinez and his King Dedede who was also undefeated in the loser’s bracket, setting up the final showdown between Martinez and an undefeated Christian Saldana.

The final round would be a best-of-five match-up and began with Saldana’s successful ZSS facing off against Martinez’s dominant King Dedede.

In the second match, Saldana found it was time to unleash Pac-Man and served Martinez back-to-back losses.

Desperate to overcome Saldana’s yellow terror, he decided to play Luigi in a last-ditch effort to throw off Saldana’s game. Seconds into the fourth round it became clear that there was no hope for Luigi with Pac-Man munching his way to a decisive victory, clinching the championship for Saldana.

Saldana claimed a $25 Game Stop gift card for his win which he plans to use towards purchasing an iTunes card for downloading music. All other contestants were awarded a one hour credit in the USU games room.

There will be two additional Super Smash Bros. tournaments this semester on March 15 and April 19.