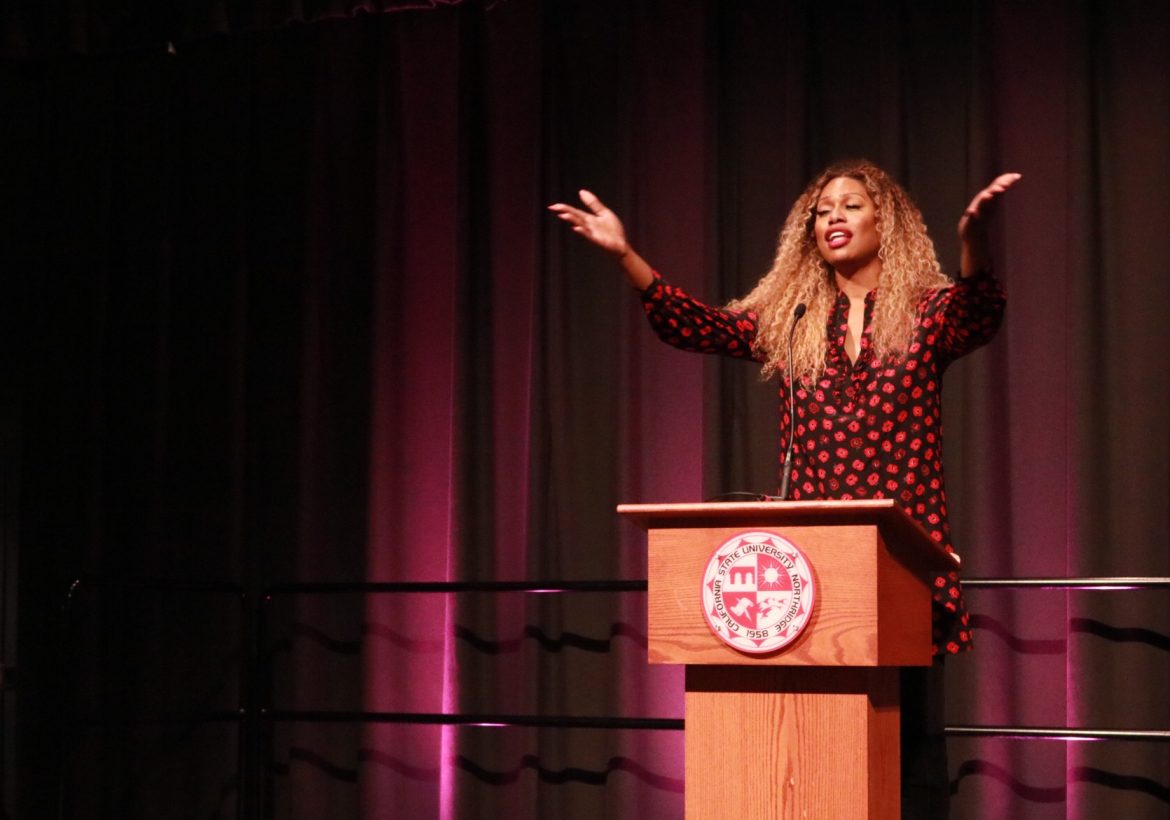 Two-time Emmy-nominated actress and Emmy-winning producer, Laverne Cox, spoke to hundreds of CSUN students at the Northridge Center, about her struggles and successes as a trans woman of color, March 1. Photo credit: Arpy Zargarian

Hundreds of students filed into the Northridge Center Thursday night to see Laverne Cox take the stage and share her many struggles with being a transgender black woman in the US.

Cox is best recognized for her role as Sophia Burset on the Netflix series “Orange is the New Black” in which she also plays a black trans woman incarcerated in an all-female prison.

Since gaining fame, Cox has been a staunch advocate for the LGBTQ community and anyone else who has ever been made to feel uncomfortable in their own skin. The actress started a social media campaign with the hashtag #transisbeautiful to build a community of support for transgenders who are too often alienated.
“If you are trans in the US, you are under attack,” Cox said.
Cox revealed several statistics from studies on transgender people showing the group as exceptionally vulnerable to extreme violence and suicide. She suggested this is likely linked to the national attitude and perception of transgender people who are vilified, trivialized or otherwise marginalized to the point where they are considered apart from humanity.

Flipping her hair, Cox affirmed “But ain’t I a woman!” referencing the phrase delivered by Sojourner Truth during a speech at the 1851 Women’s Convention in Akron, Ohio and with whom Cox shares a common birthday. Like Cox, Truth was often shamed by those who likened her to a man.

Cox described her experiences growing up, from pre-school to high school, where she was bullied nearly every day for being different.

“The second I was off the bus, I had to start running or I’d be beat up,” Cox recalled.

She also detailed a specific event in the third grade when she was out with her classmates on a field trip to Six Flags where she bought a fan from the gift shop and began waving it over herself emulating Scarlett O’Hara from “Gone With the Wind”. This drew attention from her teachers and landed her in corrective therapy.

Cox recalled the therapist asking: “Do you know the difference between a boy and a girl?” to which Cox replied, “There is no difference.”

The same therapist would go on to recommend Cox receive testosterone injections to take on more masculine qualities.

While in the sixth grade, Cox lost her grandmother with whom she had been very close and around the same time noticed that she started to be attracted to boys. At the time, Cox held the belief that somehow her grandmother could hear all the thoughts in her head and would be terribly disappointed, so she decided to overdose on over-the-counter medication in hopes she wouldn’t wake up.

Cox described the shame she felt growing up as detrimental and linked to her depression and thoughts of suicide.

Cox eventually found her way to New York City where she met other transgender people going through many of the same struggles she was. She recalled meeting a trans woman, Tina Sparkles, who served as an inspiration to Cox as she witnessed Sparkle’s transition from a tall masculine person with bad skin to a beautiful woman.

“All my misconceptions melted away,” Cox said.

Several years into her transition, Cox still found it difficult to be satisfied with her image. She was disheartened by the fact that after so much effort, she could still get “spooked” by others on the street who were shocked by her appearance. Cox ultimately realized that the fact that people could tell she was a man was not a bad thing.

“We have to think differently about gender as a culture,” Cox said. “I am not just one person, and neither are you.”