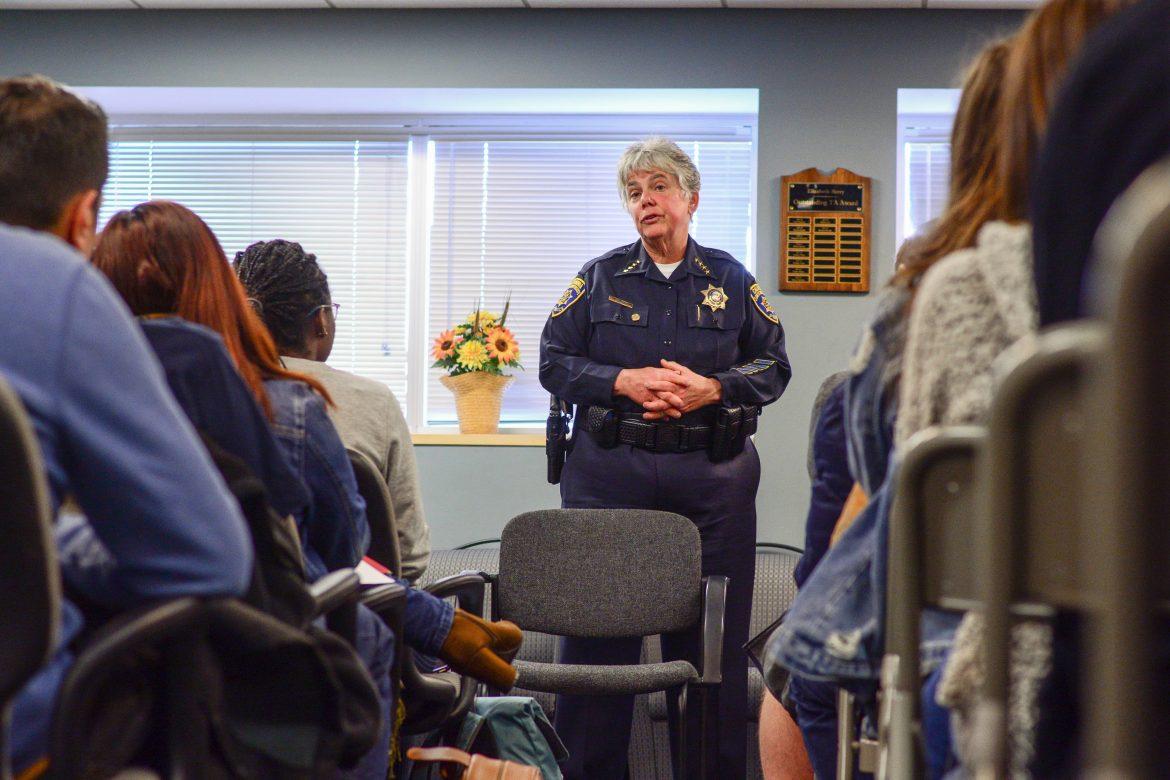 Students filled the room to engaged in dialogue over what they felt was mishandling by the CSUN administration over the “Snapchat incident.”

“It’s always important to get feedback from the campus community,” Noblitt said. ”I really value the feedback from our communication students, their perspective and their life experience from being in the classroom.”

Students wanted to know why the university wasn’t shut down during the incident.

Watkins said the decision to shut down the campus was a very major decision and if the threat is not what it appears to be, the campus will most likely not be shut down.

“We don’t want to have a situation where the campus is open to anyone who wants to assert some threats and then have the campus shut down,” Watkins said. “You don’t want that to happen during finals time.”

“This was absolutely malicious. What kind of person puts up a picture like that and think it is funny, amusing, whatever was in this person’s mind and was it deceptive? Absolutely because part of our community was scared this was a real thing,” Glavin said. “I argue that is what he wanted us to think and the fact is there was never any danger.”

Watkins and Glavin acknowledged they needed to do a better job of communicating with the students and offer some guidance on classrooms that will instruct students what to do in cases similar to the “Snapchap incident.”

“The notion of how quickly and consistently we communicate with students under certain circumstances,” Watkins said. “Secondly, we need to be very thoughtful about the words that we use as having a meaning other than what we intended.”

Students suggested that Glavin should use the definition of hoax rather than the word itself, that way they could avoid any misunderstanding.

Noblitt added they needed to do a better job managing social media and asked students if they saw anything suspicious to report it immediately.

“Moving forward is to do a better job of understanding what is happening on social media and how that is impacting the campus awareness on different incidents like this,” Noblitt said.

Communication studies major Ivan Vargas said he was very satisfied with the university administration’s willingness to listen to students’ concerns and for owning up to their mistakes.

“Not many people in our society want to admit they made a mistake,” Vargas said.

Glavin also said the perpetrator was terminated by the company GardaWorld, a security company that has a contract with the university. She said she is currently working with the LA city attorney office to prosecute him.

“We are going to make an example out of this guy,” Glavin said. “I don’t want anyone else thinking they can do that at CSUN and get away with it, because we are going to prosecute him to the end degree of the law.”

Since the discussion, President Harrison sent a campus wide e-mail acknowledging the feedback from the community. Inviting further recommendations and concerns to be emailed to Glavin at anne.glavin@csun.edu