Martin and Theus out at CSUN 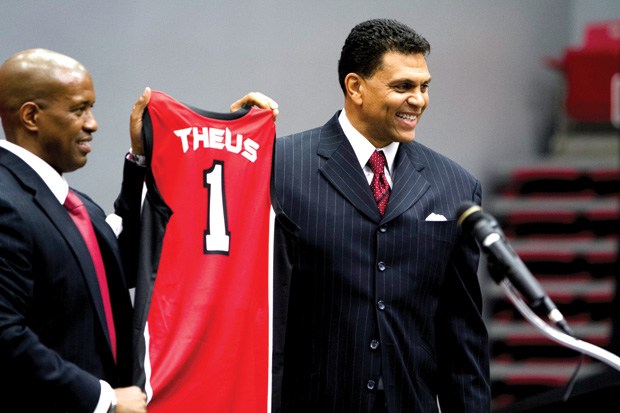 Athletic Director, Dr. Brandon Martin, welcomes the new men's basketball coach, Reggie Theus, to CSUN during a press conference at the Matadome in 2013.

Editors note: This story was updated at 4:54 p.m. Wednesday to reflect the additional removal of Brandon Martin. Additional style changes were later added.

While multiple sources reported the firings during the day on Wednesday, the university issued a statement later that afternoon.

“I want to thank both Coach Theus and Dr. Martin for their dedication to Matador Athletics. We wish them the best moving forward,” CSUN President Harrison said in the statement. “CSUN is absolutely committed to the success of Matador Athletics and to supporting our student-athletes.”

Martin’s tenure was mired in the academic fraud scandal in 2016 and CSUN received three years of probation and a postseason ban that was self-imposed in 2015.

The scandal revolved around cheating from former players and led to the firing of former Director of Basketball Operations Lior Schwartzberg.

Theus led the Matadors to the Big West tournament in his first season in the 2013-14, but since then his teams have struggled.

In three of the last four seasons, CSUN has finished in the last place, and in all five seasons, the Matadors failed to have a winning record.

Theus also struggled at times to retain much of the local talent within the San Fernando Valley. Just this year, CSUN lost the recruiting battle with highly-coveted guard Kihei Clark of Taft, along with dozens of other players who have chosen to go to school out of state or at rival Big West schools.

CSUN athletics has not announced an interim coach for Theus or a replacement for Martin.