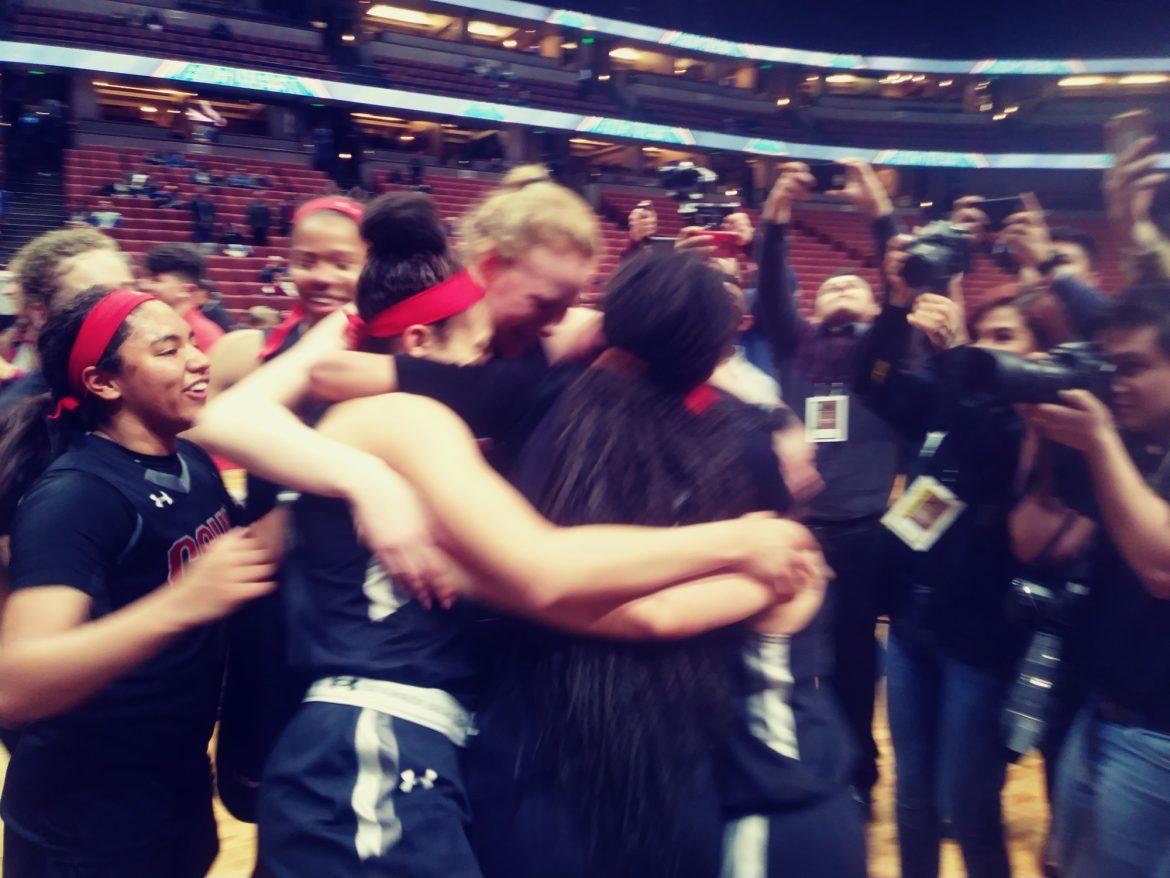 Channon Fluker and Tessa Boagni had sweat pouring down their faces. The two leading scorers for CSUN were getting punished and seemingly everything UC Davis put up was going down.

Earlier this year the Matadors would have folded, but after four days of being battle-tested this team refused to blink. CSUN overcame a 14 point deficit in the first quarter and hung on late to defeat UC Davis 63-55 in the Big West Tournament Final.

The win gave CSUN (19-15) its third appearance in the NCAA tournament in five years.

Head coach Jason Flowers admitted after the game that he told his team they would not win the Big West Tournament playing a zone defense after a 13 point loss to Cal Poly in mid January.

As it turned out, a zone defense was the recipe toward getting CSUN back into the game. After the Matadors were getting beat back door, CSUN switched up its defense and slowly starting to gain traction.

“I’m extremely proud of these young women,” Flowers said. “It’s going to sound crazy but they have grown a lot in this last week and a half. They have become grown playing this tournament.”

Fluker finished with 22 points and 13 rebounds and Boagni had 19 points with six rebounds. Boagni was named Big West Tournament MVP.

Many things had been put into question during the tournament including whether or not CSUN could finish games. Freshman Destiny Brooks put all of those doubts in the past.

With the shot clock winding down in a one possession game, Brooks hit a runner with two players in her face and give CSUN the lead 57-53 with 55.2 seconds remaining in regulation.

“I heard my team counting down the shot clock and I just trusted in my teammates,” Brooks said. “I had a screen come, I threw it up and with God it went in.”

This season for the Matadors has had more than its share of bumps and bruises. In January the team lost senior and second leading scorer Serafina Maulupe to a torn ACL. The next two months saw Flowers and his coaching staff on a weekly basis shuffling up the lineup and to hopefully, find the right combination.

“It was not easy knowing the connection that we had on the court with [Serafina] but we just had to keep going,” Boagni said. “When a player went down, we never really lost them. They simply just played a different role and helped us in different ways. Serafina would take me aside sometimes and make sure that I did my role as a senior but we never lost anyone.”

Fluker and UC Davis forward Morgan Bertsch were the top candidates for Big West Player of the Year and the two went at each other back and forth in the third quarter. Bertsch scored on a step through that was followed by Fluker hitting a left handed hook shot from the corner.

Fluker and Boagni were just a little better down the stretch.

“My teammates just put me in the right spots to score,” Fluker said. “They were just getting me the ball in the right positions and I was just able to execute.”

As passive as the Matadors looked in the opening five minutes of the game, CSUN closed it with poise and confidence. Flowers earlier in the season had questioned whether his team could finish. In the Big West Final however, Flowers was more confident about his team securing the win.

Now the Matadors are on its way to another NCAA tournament. Fluker has been one of the best mid-major players in the entire country, but midway through the season she was carrying the team on her shoulders. The reemergence of Boagni along with Brooks, Hayley Tanabe and Meghann Henderson has helped CSUN accomplish its goal of winning another Big West title.