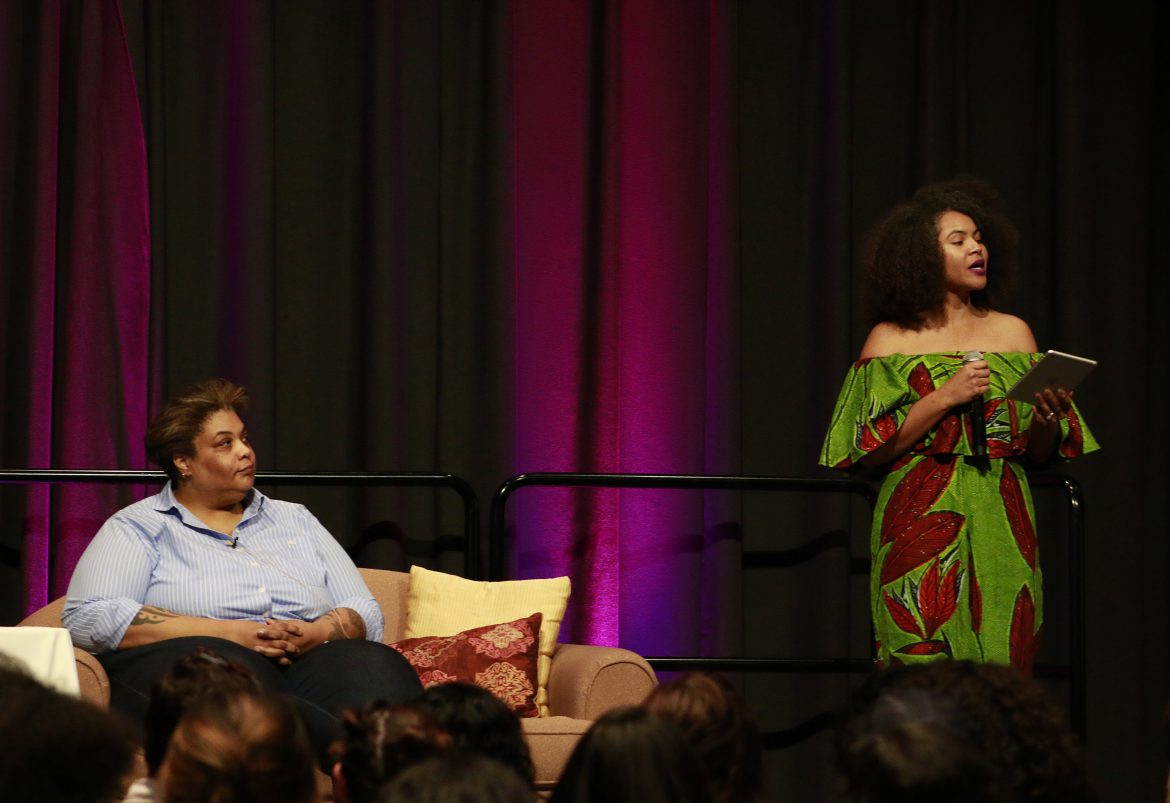 A crowded, diverse auditorium greeted Roxane (“with only one n”) Gay as she took to the stage inside the Northridge Center on International Women’s Day, Mar. 8, with spoken word poet and actress Yazmin Monet Watkins.

The event, put on by the Women’s Research and Resource Center, featured Gay reading an excerpt from her memoir focusing on self-care and body image, and a Q&A session and a book signing for fans afterward.

Gay is widely known for her works, “Bad Feminist,” “Difficult Women,” Marvel’s “World of Wakanda” and most recently, her memoir “Hunger.” She is a contributing opinion writer for The New York Times, a professor at Purdue University, and was one of the first two black women to author a series for Marvel comics.

Watkins, an outspoken bisexual, opened the event with a poem from her forthcoming book “A Vessel Born To Float.”

“Dear straight people,” she spoke into the mic, “stop asking me to choose. No, I am not greedy, I am not confused, I am not a cheater. I am bisexual and I love without limits.” Watkins enunciated each word with a ferocity born from conviction and personal experience.

Her vibrancy contrasted with Gay’s plain and humble demeanor once it was the older woman’s turn to speak. However, it soon became clear that she held just as must conviction in the intellectual and soft tone of her voice. You would never guess that she was nervous about public speaking, as she later admitted.

Gay captivated the audience with her reading of “Hunger,” which is based on struggles with her own “wildly undisciplined” body. Students laughed at the jokes and relatable banter between Gay and her well-meaning, but insufferable personal trainer TJ.

“I want to murder this man when we work out.”

They listened solemnly as she reflected on the days of her youth when she had a secret romance with the “golden boy,” who raped her with his friends when she was only 12 years old.

30 years later, Gay still battles with trauma, but never let it stop her from becoming the successful woman she is today. When asked how, Gay replied that part of it is getting therapy and “part of it is accepting that I’m never going to get an apology.”

Besides developing coping mechanisms, she advised that you don’t have to forgive or forget your abuser, “but you do have to thrive.”

Lighter topics were also discussed throughout the Q&A, such as Gay’s involvement with Marvel, tips for writing, book recommendations, qualities to look for in a partner, her feminist role models and what her favorite Beyoncé song is (spoiler: it’s “Hold Up”).

She highly encouraged everyone to see Disney’s recent adaptation of “A Wrinkle in Time” and revealed that she is interested in writing or co-writing a Batgirl film when it’s back in development.

Gay’s ability to be vulnerable, down-to-earth and critical all at the same time undoubtedly left an impression on students.

Marketing major Desiree Cherre, 21, was impressed because “Although her body was her biggest insecurity, she was okay with writing about it.”

For 29-year-old Abraham Zapata, an English major who discovered Gay on Twitter, he wanted to meet the writer he admired in person.

“As a gay man of color, I feel that she is a role model in that we [minorities] do not have to be perfect. We can have flaws. We can struggle. We can be funny.”

Both Zapata and Cherre bought copies of “Hunger” and had them signed by Gay.

25-year-old Unai, or Nani, Elisara, who is working on her M.A. in English with an emphasis in rhetoric and composition, related to Gay when she spoke about her trauma. Elisara has also been harassed by men in both her work and personal life, so Gay’s advice to “channel your anger into productivity” really stuck with her.

This event is one of over 30 appearances Gay will be making nationally throughout 2018.

Correction: An earlier version of this article said Watkins poem came from her book, “Love Without Limits: The Bi-laws of Love” and began with “Dear white people”.