The Gottfried era begins at CSUN 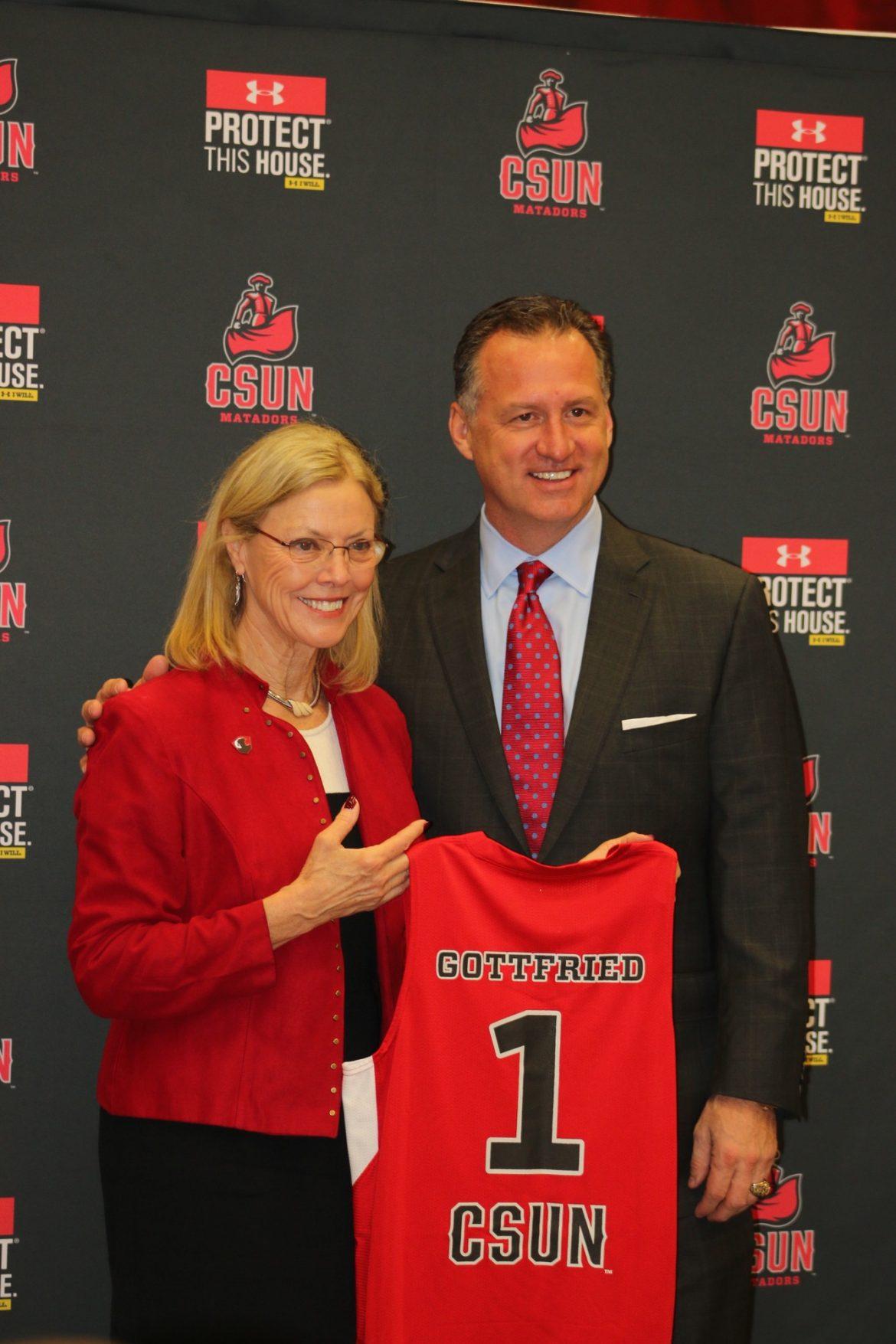 “We want players that want to be here.” Those were the words echoed by Mark Gottfried who was introduced as CSUN’s new head basketball coach on Tuesday at the Matadome.

Gottfried has a successful past and first won an NCAA tournament as an assistant at UCLA back in 1995. Gottfried later earned his first head coaching job at Murray State before landing jobs at Alabama and most recently North Carolina State from 2012-2017.

During his tenure at NC State, Gottfried led the Wolfpack to four appearances in the NCAA tournament including a berth in the Sweet 16 in 2012. Gottfried most recently served as an assistant coach and scout for the Dallas Mavericks before the hiring was announced on Monday.

“Winning carries a lot of things and people need to be excited for who they’re cheering for,” Gottfried said. “This is not going to happen overnight, I do not have a magic wand. My goal is to one day see people hanging off the rafters in here. For the Valley it should be about the excitement of coming to a game.”

Gottfried mentioned the transition he led at Alabama where he took over as coach in 1998 that he described as “the gym being so empty that you could have dropped a bomb in there and no one would have been hurt.” In three years, the Crimson Tide won the SEC in 2001 and the following year earned the programs first No. 1 ranking in the AP poll.

Gottfried was hired less than a week after Reggie Theus was fired. CSUN President Dianne Harrison oversaw the decision and the hiring was announced Monday.

“I think he has the credentials to take us to the next level,” Harrison said. “I appreciate his core values and he has the whole package and what we were looking for. In the basketball world if you snooze you lose.”

Gottfried is discussing the prospect of bringing in former UCLA head coach Jim Harrick as an assistant coach or special advisor. Harrick led the Bruins to its last national championship in 1995, where Gottfried was an assistant coach. Harrick is 79 years old and last coached for the now-defunct Bakersfield Jam of the NBA Developmental League. Despite his age, Harrick is still frequently seen at AAU tournaments and sources around the team have said that he still maintains his “tremendous basketball mind.”

Harrick is unsure what his specific role will be with the team, but he’s already had discussions with reigning CSUN point guard and Big West Freshman of the Year Terrell Gomez.

“I’ve had the privilege of sending eight point guards to the NBA and everything I’ve learned, I learned through coach [John] Wooden,” Harrick said. “We have a system of basketball that makes guys better and we learned it from the master. If [Terrell] buys in, he will get a lot better.”

Gomez is now the face of CSUN basketball with senior Tavrion Dawson due to graduate at the end of the semester. He says that he will still maintain contact with Theus but is also looking forward to the new team Gottfried is putting together.

“We have definitely talked and we have done our research on each other,” Gomez said. “I’ve learned about all the great players and point guards that he has coached. He coached Dennis Smith Jr, Anthony ‘Cat’ Barber and other great guys. He said he’s watched film on me. He said he liked the way I played and definitely could make me better. I’m just interested in getting better so I can play at a higher level.”