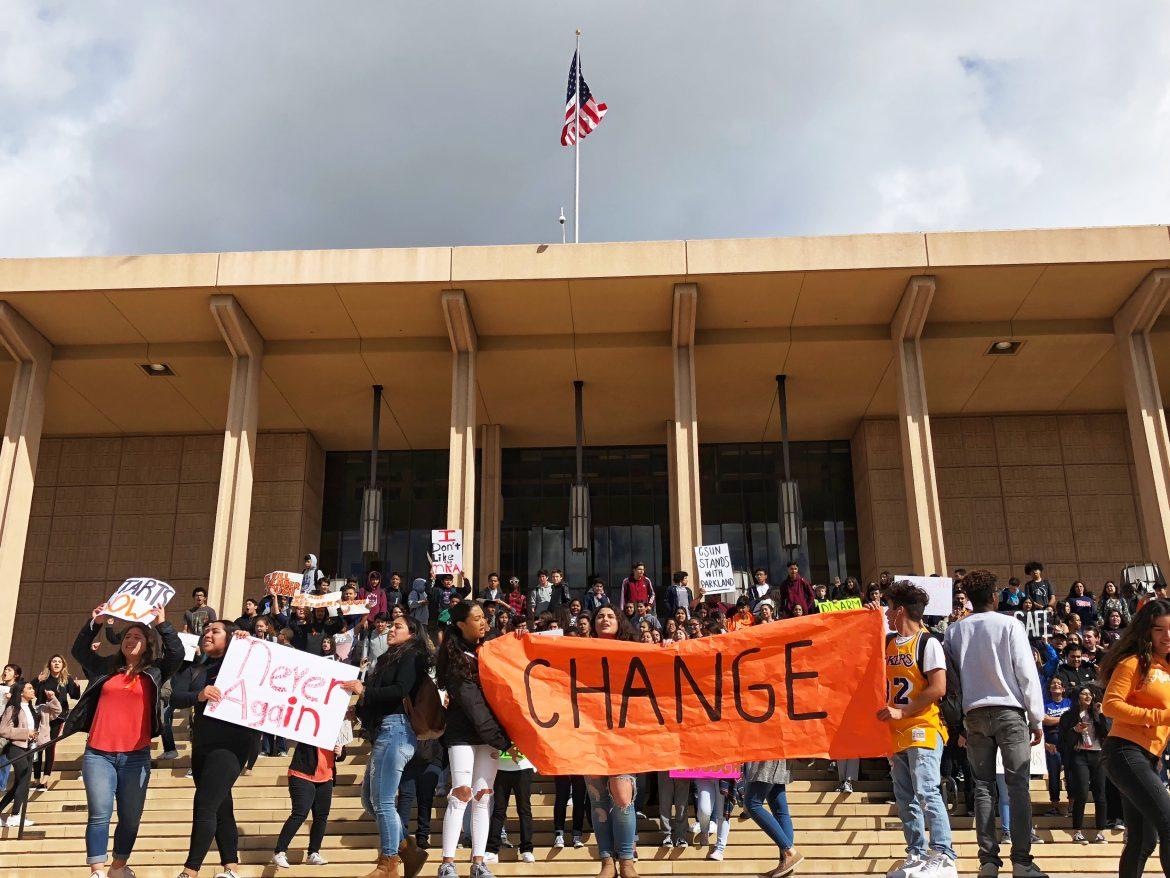 More than 500 students from CSUN, Northpoint High School Northridge Academy gathered at the steps of the Oviatt Library as part of National Walkout Day to stand in unity with students at Marjory Stonemason Douglas High School and call for stricter gun control laws.

The initial demonstration was organized by Political Science senior Jaelin Palmer and the CSUN club, “Students for political decency.” Demonstrations started at 10 a.m. with CSUN and Northpoint students chanting “No more silence! End gun violence!” and “Gun control has come too late!”

“We are here because we deserve an education just like the millions across the U.S. to feel safe in our classrooms and earn a degree feeling safe,” Students for political decency Vice President Samantha Crende told the crowd.

Many students wore orange, the color of the gun-control movement, to show their support of the demonstration. According to Students for political decency club President Michael Meeks, noted that they were planning for the demonstration before CSUN’s own gun ‘hoax’ situation last month.

“It’s crazy because as we were planning this we had the ‘hoax’ thing that happened a few weeks ago,” Meeks said. “I wasn’t on campus but I just dropped my brother off when I get texts from our vice president saying somebody posted a gun on Snapchat… It’s crazy, but it does hit close to home… so I’m glad CSUN seems supportive of it [the walkout] today.”

The demonstration appeared to be over 10:30 a.m., until more than 400 students from Northridge Academy flooded the east side of campus before gathering at the Oviatt steps.

The crowd of protesters then dispersed at 10:40 a.m. and proceeded to march their way back to Northridge Academy. The crowd marched from the Oviatt, through the Bookstore Complex and walked down the sidewalk on Nordhoff as they proceeded back to their campus. They continued to march and chant “We want change!” and “End gun violence” at passing cars to get them to honk in support.

“I’ve been waiting my whole life for this,” Rodriguez said. “We have to do what we have to do to be heard.”

The arrival of the Northridge Academy students was a complete surprise according to Vice President of Student Affairs William Watkins. However Watkins believes the large number of students showed that students at Northridge Academy were strongly in favor of the national walkout.

“I think that we’re always concerned that young people are turned off to the political process but the idea that students are looking for the opportunity to step forward and to be heard in the discourse of how things happen in our country is fantastic,” Watkins said.