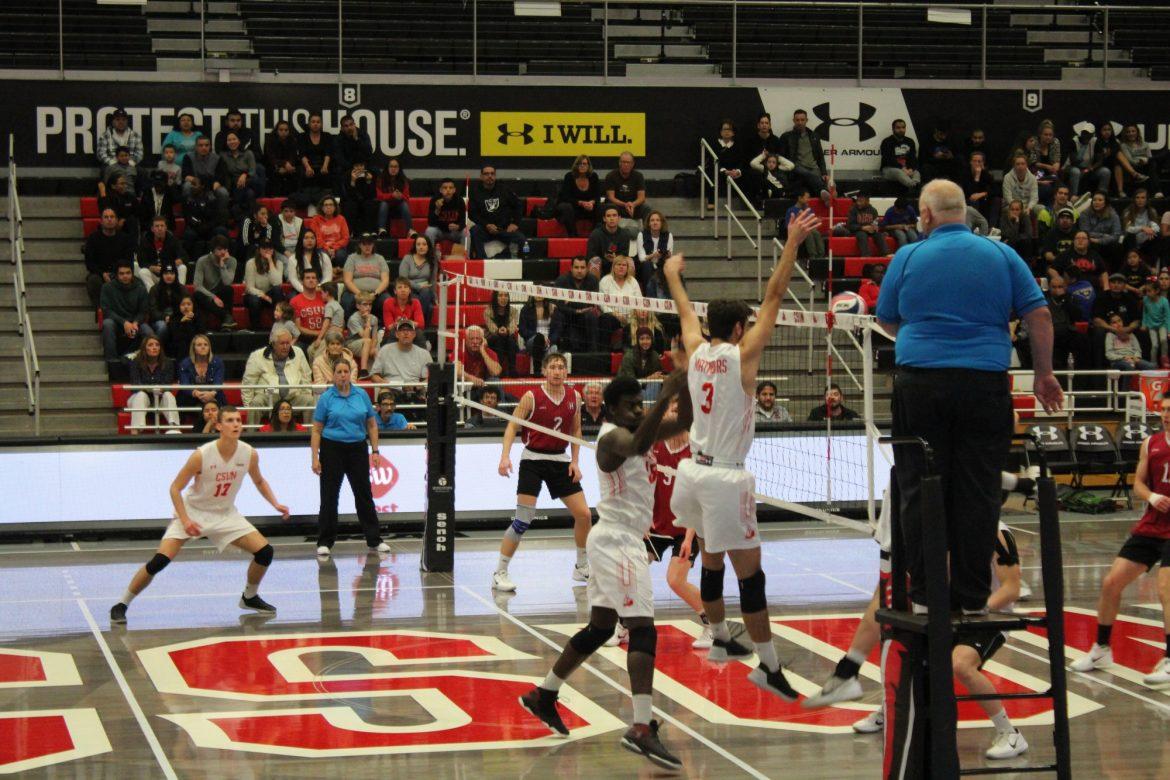 Sam Porter with a block in a match against Harvard earlier this month Photo credit: Justin Vigil

No. 10 CSUN finished off a historic weekend with numerous milestones including the team’s first Big West win, the team’s first win against a ranked opponent and coach Jeff Campbell’s 300th and 301st career wins.

The Matadors swept No. 3 Hawaii in the Matadome Thursday and Friday night for the team’s first wins against the Rainbow Warriors in five years and now find themselves on a four game win-streak.

Aside from an out of sync start to the second set, the Matadors were clicking and charged back into the game after trailing as much as five. CSUN then took charge down when Hawaii faced match point. The Matadors scored three straight to win the second set 26-24.

“It feels great sweeping Hawaii twice in a row, Greene said. “We came in, played great, served well. It’s just a great all around game. We feed off this energy.”

Greene finished off the weekend leading the team yet again with 32 kills and hit .386 versus Hawaii.

“Those are statement wins for us and I was really proud of our guys,” Campbell said.

The second game CSUN took control of the game and ran.

Two separate 5-0 runs would separate the Matadors from the Warriors followed by a 3-0 run to close set one.

Hawaii’s 4-3 lead in the first set would be their final of the game.

CSUN would not take their foot off the gas and stormed into the third set going up 10-1 including four aces from Dimitar Kalchev who matched his career-high with six aces. Porter also finished with two aces.

Porter was outstanding yet again finishing the series with 68 assists.

The Matadors (12-7) now go into Spring Break with great momentum and will sit at third in the Big West for two weeks until getting back into action in two weeks.

“I feel like we’re coming together really well,” Greene said. “We had a slow start in the beginning but we’re getting our groove on now. We’re really gelling.”

The Gauchos currently sit in a tie with the Matadors at 2-2 in Big West action.

The Gauchos and Matadors kick off the series season in the Matadome at 7 p.m.