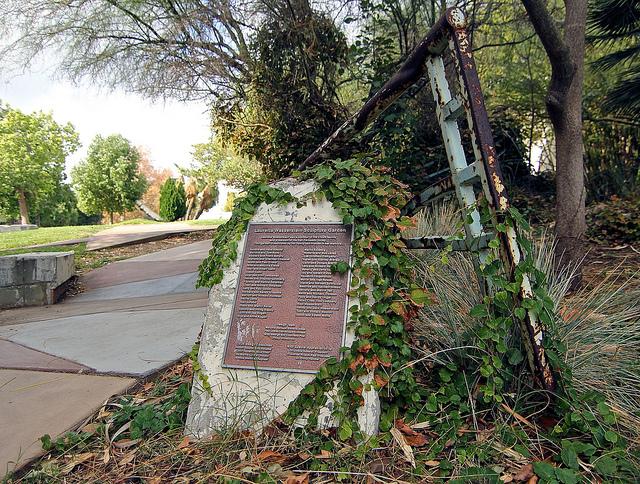 The Earthquake Memorial is located between the Matador Bookstore Complex and the Nazarian Center for the Performing Arts. It contains remains of some structures that were damaged by the Northridge Earthquake. CSUN is located in an area that is seismically unstable, making another earthquake a possibility. Would you be prepared? Photo Credit: Lucas Esposito / Daily Sundial

Each semester, as it comes time to register for classes, one unifying barrier stands in our way – the Title IX rape prevention training videos. The first semester in which one is expected to sit through awkward reenactments and uncomfortable testimonies is unpleasant enough, but then it comes back again and again. While there is a value to educating students about the dangers of rape and other sexual assault risks, are there not other scenarios of concern to college students that should be addressed? Could you escape a sexual assault if it didn’t involve a party and drinks, the videos’s main scenario? Could you survive an active shooter or an earthquake?

Personally, I now know precisely what to do to prevent a rape at a party; I’ve sat through multiple semesters’ worth of Title IX videos. Unfortunately, any potential rapists have also seen these videos and know what preventive measures to dodge. Also, due to the apparent assumption that everyone parties, what preparation has been given to those who, like me, a rather small and slender woman who often has to walk home late at night, might have to face off against a potential rapist in another situation? Do you know how to wear your hair so it can’t be used to hold you? (Hint: Ponytails are easy to grab.) Do you always walk back to the dorms using the same route? Do you know where to kick, punch or poke to disable an assailant?

Yet sexual assault is not the only threat to students. There has been increased discussion about the risk of a shooting. Earlier this semester, a video showing a gun on campus left many questioning why the campus wasn’t shut down to address the threat. What are you supposed to do if there’s an active shooter on campus? There are a few posters scattered around campus, but how many of us have actually taken a moment to look at them? When should you barricade the door and when should you leave the building? Where is it safest to hide on campus or in your classroom? Should you try to disable the assailant if you have the opportunity? CSUN’s CTVA department and the campus police produced a video that answered some of these questions, but unlike the Title IX program, it’s not a requirement to watch.

There is also an increased risk of an earthquake. We’re overdue and yet there are many students from out of state or even out of the country who would not know what to do if an earthquake struck. In your average classroom, where would you be safest to shelter? Should you go outside when the tremors first start? Independent research is capable of answering these questions, but students are not expected to research or have the good sense to know how to protect themselves and their friends from a rape at a party, so why is a safety concern ignored on a campus that was devastated by the last large earthquake it endured?

The Title IX videos are valuable, but there should be different versions shown throughout one’s school career that detail other scenarios. They ought to be alternated, perhaps in alignment with the fall and spring semesters, with safety courses that could save not just your sanctity but also your life.