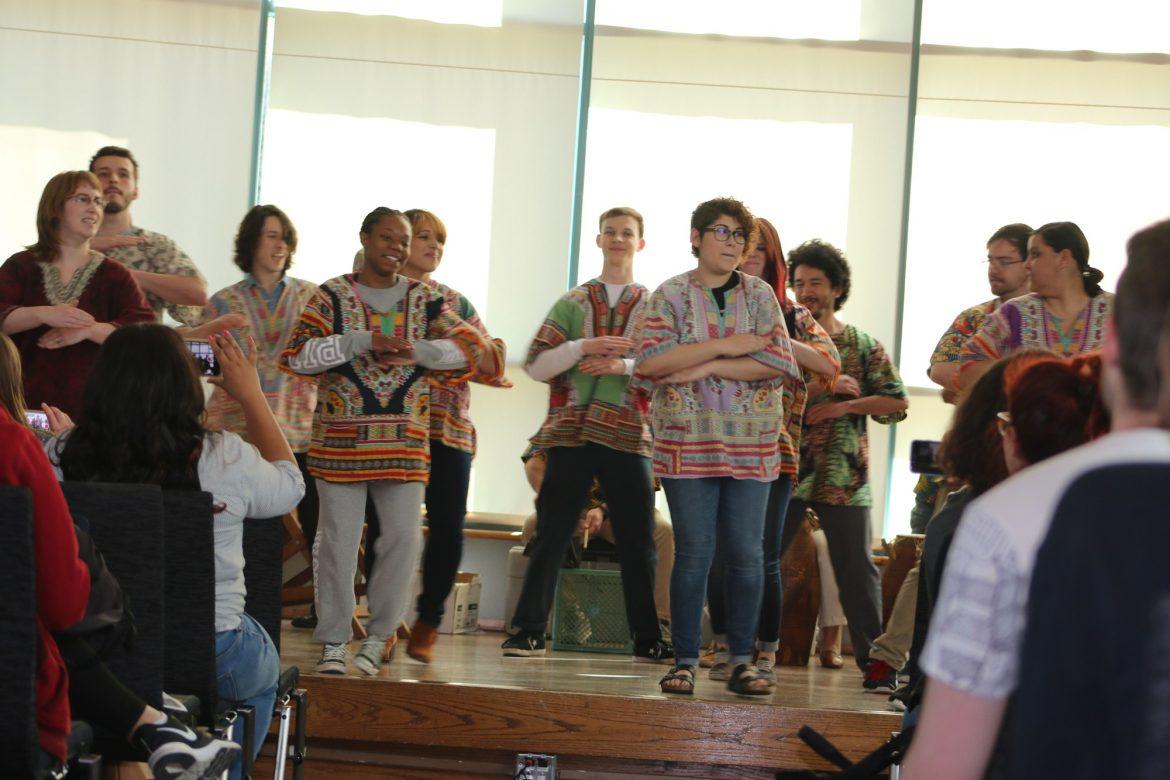 The activities and speakers at this year’s African Studies Symposium focused on social movements. Students were put into workshop groups and advised to build their own roadmaps to engage the community in civic action when it comes to dealing with major issues like DACA and gun control. Although students didn’t know each other, Music Industry Studies major Sami Posner said coming together was easy.

“Gathering a group of people together and giving them the tools…could take hours and hours, but this wasn’t hard and this is such a big deal, so it was effective,” Posner said. “It was thought provoking but it wasn’t hard; everyone getting involved in one thing instead of trying to build Rome in one day is the only way to make effective change.”

Students and faculty gathered in the USU, Grand Salon to look at ways to fix social issues in society and on campus with help from guest speakers.

“What this seminar actually provides is an outlet and a source for those who might not know exactly where to do it or where to start,” said Music Therapy major Jason Hansen.

The symposium was put on by the Interdisciplinary Studies of Africa Minors Program (ISAMP). The program provides the basis of the College of Social and Behavioral Sciences new minor called International Studies of Africa. Students can declare this minor in which is 18 units. The minor does not just consist of classes in the Africana studies department. Additional courses from the political science department, urban studies, art, history, geology, anthropology and religious studies also count towards the minor.

The guest speakers included CSUN’s very own Ric Alviso who sang a song and played instruments as a responses to social issues in Africa. He also directed his students in an Ghanaian dance and music ensemble.

Kinesiology professor Chris Bolsmann is a South African sociologist who talked about how music affected his experience growing up as a white South African. Professor Mutombo Nkulu-N’Sengha discussed religion and activism and Professor Sheba Lo talked about how hip hop is a call to action in the Gambia (a small West African country, bounded by Senegal).

Before other guest speakers presented Professor Lo asked the audience, “Y’all know Africa is the future right?” She introduced author Chika Ezeanya-Esiobu who highlighted the indigenous knowledge and future advancements of Africa.

The founder of the African Communities Public Health Coalition Senait Admassu talked about how her organization trains people to become advocates which creates social movements. Admassu also explained the service reach demographics of the almost 6,000 African descendants in LA County.

“It’s hard to reach immigration communities everywhere; we have Rancho Cucamonga, we have Carson, everywhere, all LA County,” Lo said. “There’s some families… [with] mental health issues, nobody understands them because of a language barrier.”

Nisrin Elamin Abdelrahman is an Anthropology PhD student at Stanford University. Her research focuses on belonging, citizenship, and Sufi Leadership in central Sudan. Elamin Abdelrahman’s keynote covered how social movements build people power across the continent. She also led students in the workshop and encouraged them to do their own research when forming a social movement.

“You have to do a lot of research to be able to come up with an effective plan to know who the targets are,” Abdelrahman said. “In terms of information it depends on the issue but I would go to the people that have been organizing around us for a very long time. To figure out what it is that they are already doing and to figure out how you can support or maybe form a chapter here at CSUN.”