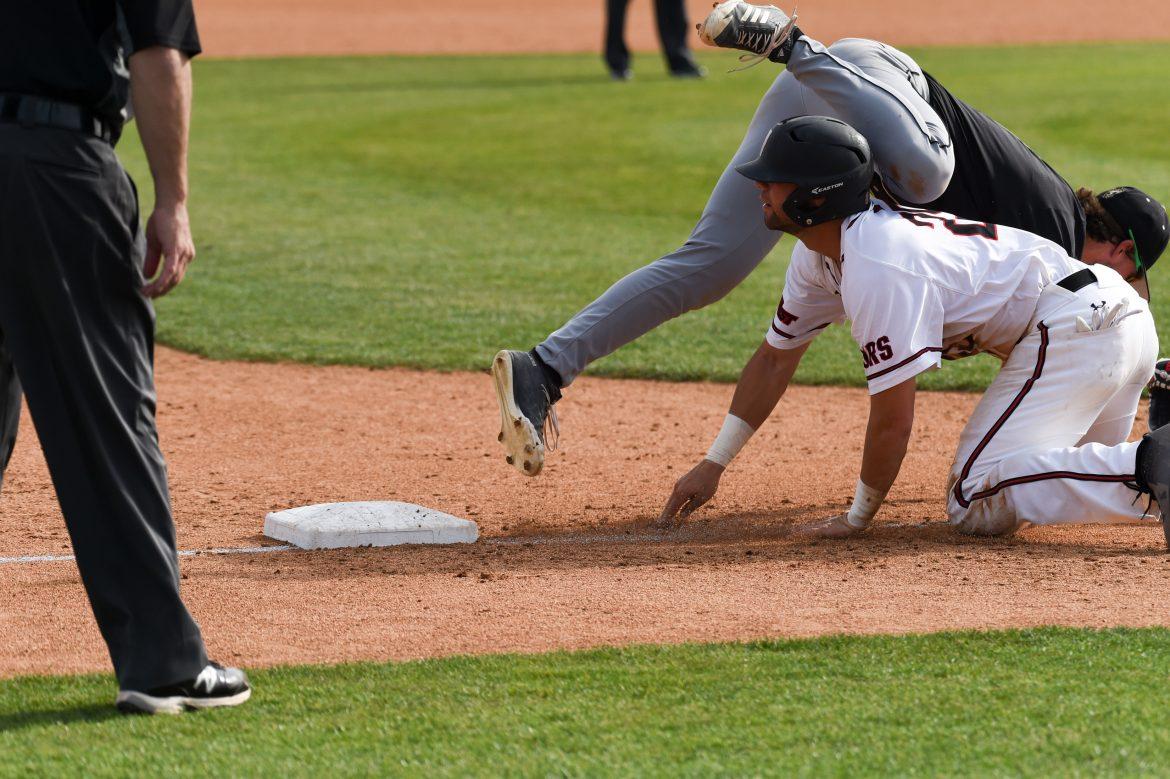 Trevor Casanova slides back to third base and crashes into the Cal Poly third baseman. Photo credit: Peter Griffin

Big West baseball opening weekend concludes with the Matadors on top of the conference.

CSUN took the opening series over the Cal Poly Mustangs winning the first two games 5-3 and 10-7 and dropped the last game 5-4.

In the series finale, Albee Weiss wasted no time and blasted a solo home run to left on the first pitch he saw.

CSUN got into trouble in the third inning and Poly capitalized on consecutive walks which led to three runs.

Catcher Trevor Casanova answered in the bottom of the third with an RBI double that scored second baseman Brandon Bohning.

“It feels good, it’s definitely what we work for every single day,” Casanova said. “We find any way to get a win and we got two wins out of three and we’re going to go back to work and keep doing what we’re doing.”

Senior Riley Conlan then followed in the fourth inning with a two-run homer to take the lead.

The CSUN homers were the first given up on the year by Cal Poly pitcher Darren Nelson.

Nelson had a solid outing until a sloppy sixth inning saw the freshman pitcher hit three CSUN batters. Nelson escaped the harsh inning with no runs.

The Mustangs nearly took the game in the sixth but Casanova put on a show picking off a base runner as well as meeting one at the plate to secure the one point lead.

After Vanderford was pulled from the game, the Mustangs returned to it.

Cal Poly’s Nick DiCarlo would send a sacrifice fly to right field to bring in Nick Meyer. The Mustangs hero would be pinch hitter Scott Ogrin who was hitting just .195 on the season.

Ogrin sent an RBI double down the left field line to put the Mustangs up 5-4 in the 8th.

Shortstop Alvaro Rubalcaba put the game in his hands and singled in the ninth inning but was later caught stealing. Joey Cooper popped out to end the game.

“We had a lot of walks from the pitching standpoint,” Casanova said. “From the hitting standpoint we could have done a better job, striking out a lot less, putting balls in play and putting pressure on their defense.”

“The offense is looking good, guys are having great at-bats and they’re putting things together,” Cooper said.

CSUN will be put the test on a five game road trip and will face Pepperdine on Tuesday before a three game series with UC Riverside next weekend.