Candidates compete for Matador vote in AS presidental debate 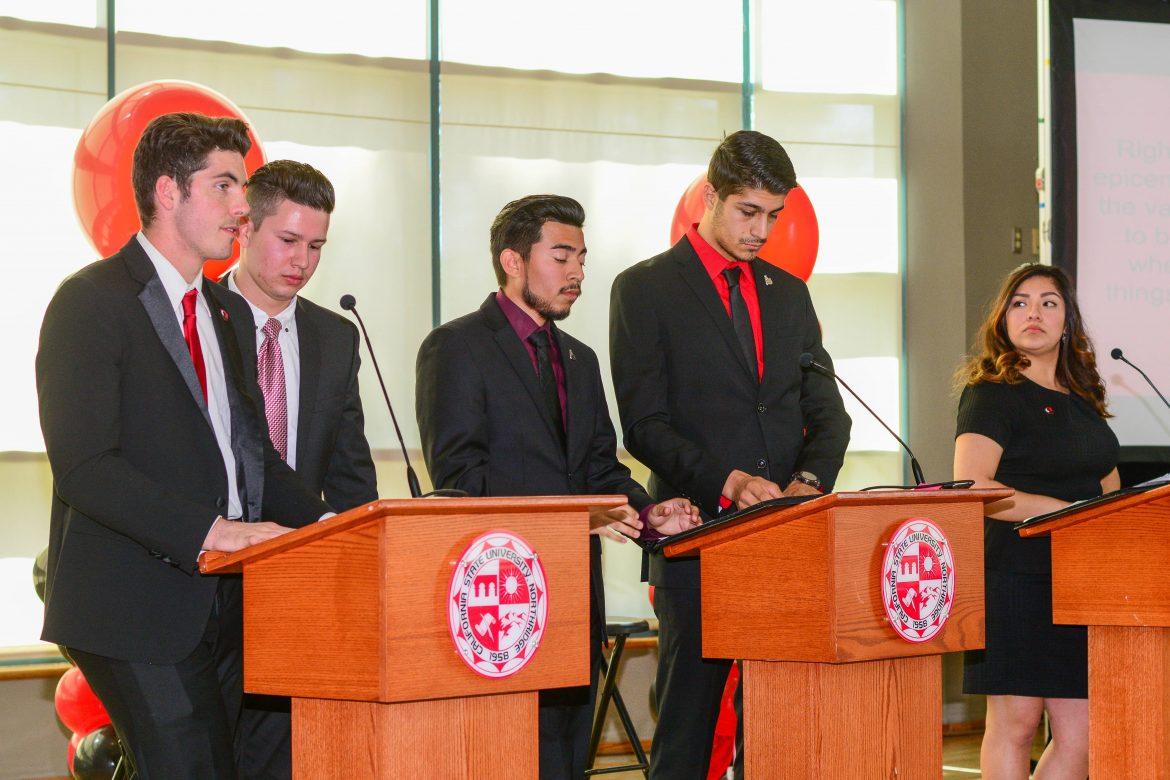 Passions, visions and ideals clashed at the Grand Salon as candidates from three parties went head-to-head for the student vote for the 2018-2019 administrative term. Representatives from Matadors For You, Rise N’ Unite and Matador Movement showcased their ideologies as they spoke about each of their slates’ missions. Each platform had one minute to answer questions asked by debate moderators.

Represented by Osje Pena and running mate Trevor McKnight, Matadors For You highlighted their focus on the student body as a whole. They discussed the topics of public safety, funding for student clubs and on-campus involvement in their administration’s plans.

Pena addressed issues concerning sexual assaults as he shared his plan to bring a volunteer police officer program to CSUN. According to Pena, students would need to complete a certification course trained by professional police officers. Additionally, he proposed the inclusion of supplementary light sources on campus to increase visibility at night.

“We want to make sure that every Matador on campus feels safe both in the day and at night…it’s very dark out there. I myself am very intimidated to walk out there,” Pena said. “I believe that CSUN has the potential to be the leading university in the state to have one of the safest campuses.”

Pena also discussed his plans to increase funding for student clubs. He plans on rearranging the AS budget to allocate more money for student-run organizations. Before he was able to explain, he reached his time limit.

Contrary to Matadors For You, Rise N’ Unite, represented by Alex Canas and running mate Mohammad Hotaki, stressed their focus on the quality of life for marginalized students as they talked about plans to help alleviate housing and food insecurities and improving four-year graduation rates.

Matador Movement’s vice presidential candidate Rose Merida stood on her own to represent the slate. Her running mate for president, Diana Vicente, had been disqualified just days before. Merida presented her party’s mission to bring equal representation in campus legislation through outreach programs and student engagement.

For the joint Q&A portion, all slates were called to the podium to answer questions from moderators and students in the audience. The questions focused on each party’s approach to topics such as the tuition hike, marginalized communities and student involvement. This portion included an additional minute after each party’s response to allow opposing slates to give their rebuttals.

Matadors For You set its sights on halting the tuition hike for students and raising funding for student clubs. The write-in presidential candidate Osje Pena talked about plans to reach out to state legislators and university administration to express their dissent for raising tuition.

“It’s hard to go to university while worrying about if you can pay for tuition,” said Pena.

Rise N’ Unite focused on improving the quality of life for underserved communities. Canas planned on implementing the CalFresh program for CSUN students who don’t have enough money for grocery shopping. He also proposed establishing housing for students with insecure and unstable housing through the Housing Instability Project. According to Canas, students will need to apply for each program.

Matador Movement emphasized raising awareness of and involvement in AS government. Merida plans to table every week outside on campus in order to interact and listen to student concerns and increase student involvement.

“Sometimes I’ll come across students who don’t necessarily know what questions to ask or when to ask them,” said Merida. “It’s our job [Associated Students] to get out there, actually do some walking around campus, table and be there for students as much as possible.”

Although each party had different missions, outreach was a common point among the three slates when it came to taking action for their plans. Each speaker echoed the importance of reaching out to students to listen to their input.