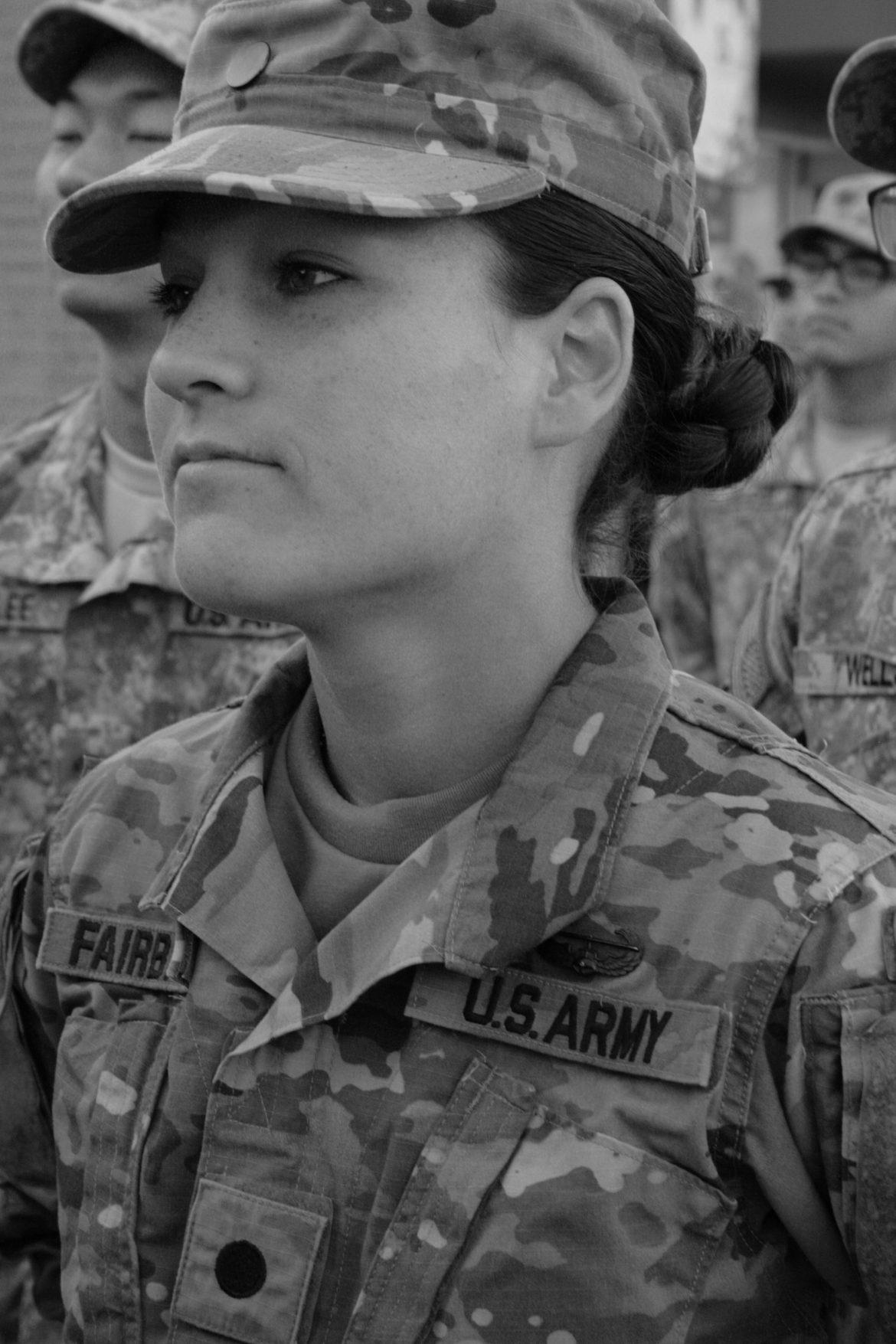 Ashley Fairbanks lines up for formation at pre combat inspection--just outside the ROTC March 29th, 2018

Whenever she would get hit with a ball or felt like she was going to cry her dad would tell her, “You’re a strong girl and you can do anything, no blood no tears.”

“That is something I said in high school and I still say now,” said Fairbanks. “You’re a strong girl and you can do anything.”

Fairbanks will be the only woman graduating from the Army Reserve Officer Training Corp (ROTC) this year.

The 23-year-old was born in Whittier, California, but moved to Agua Dulce where she lived for the majority of her life. Living in a small town outside of Santa Clarita, she grew up much differently than most.

She had an archery range in her backyard, she would ride horses and race quads. That was just the normal way of life in her small town. Due to the population size in Agua Dulce, many of the youth sports teams there had to be both girls and boys. She was usually the only girl.

Fairbanks grew up in a military family with a long line of army veterans, including her own father, who now works for LAPD.

Originally, she wanted to be a division one runner. She ran all the way to Grand Canyon University. Once she finally ran to the top, she realized she didn’t actually want to do it for life. That’s when her body couldn’t take it anymore, and at 18 years old she fell ill with pneumonia. The workout routines and poor eating habits were too taxing on her.

“I felt my heart being pulled somewhere else after the illness,” said Fairbanks.

She left behind running and Grand Canyon University and spent a year at community college, where she continued to run. She finally made it to CSUN and signed up at the ROTC.

Almost immediately after signing up she was sent to a camp. It was her first taste of what being in the army tastes like. She was always up for a challenge but this was completely different for her.

“I run in spanx and a t-shirt, this is not what I am used to,” said Fairbanks. What she wasn’t used to was having to run with gear, in a uniform and holding a dummy rifle.

“It was a lot of fun,” Fairbanks said. “This was the moment where I was like ‘I am doing this to my fullest.’”

Fairbanks was selected to go to Aviation school, and that’s when she knew. She recalls a time where she had to go through the Aviation Water Survival Test. A fear that she has is not being a strong swimmer but The Water Survival Test expects cadets to be more than just good swimmers.

During the test, cadets are submerged underwater in a helicopter that they must try and get out of. Among the challenge of getting out of the helicopter, the program has simulated rain, waves, and lightning to make the exercise more realistic. Fairbanks was terrified.

She passed the test and realized something unusual about the scary exercise. It was actually relaxing for her, to be upside down, in a helicopter, underwater.

“Being upside down in a helicopter in a 17-foot pool really forces you to be in the moment,” she says laughing. “When in your life have you ever had one thing to think about?”

Fairbanks is going to be in Aviation school for two years after she graduates this semester. She plans to fly helicopters that will eventually be deployed wherever politics takes her.

Fairbanks was told by her own family to avoid the army because it was a waste of her talent. They told her that she was ‘smarter than that,’ but she stood her ground.

“You raised me to be a patriot,” she told her parents. “I just want to give.”

After her parents realized she wasn’t backing down and saw how much Ashley wanted to do this, they became very supportive.

Fairbanks thinks anyone can join the military.

“It doesn’t matter, your genetics or whatever sex you are, what matters is your heart,” she said. “If your heart is in it you can do it.”