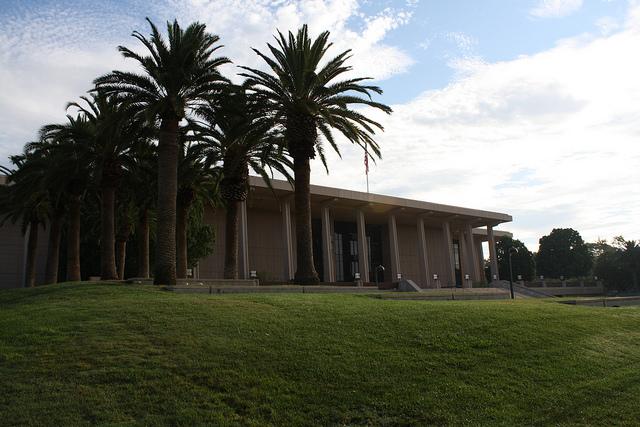 As CSUN approaches its 60th birthday, quite a bit has happened in between its inception in 1958 and today. The university formerly known as San Fernando Valley State College has been the film location for Sky High and Star Trek, and is also the alma mater of Eva Longoria and Eva Mendes. There is a lot of history that one cannot just learn from a campus tour, here are six facts you may not know.

1. CSUN was once a part of Cal State LA.

CSUN started as a satellite campus for Los Angeles State College, now known as California State University, Los Angeles. It was simply called “the Valley campus” until 1958, when it seceded into its own campus, San Fernando Valley State College.

2. Bayramian Hall was once taken over by the Black Student Union.

While students know Bayramian Hall for the long lines at the financial office, it was once home to one of CSUN’s biggest student protests. The building was occupied by the Black Student Union, who petitioned for a football coach to be fired after he allegedly assaulted a black player. Throughout the conflict, 24 BSU students were arrested, the university president’s office was set on fire and the campus was declared under a state of emergency. Other violence and protests are explained in a documentary created by CSUN Educational Opportunity Programs (EOP).

3. Delmar T. Oviatt, the namesake of Oviatt Library, was only university president for a month.

Oviatt, who served as the first dean of instruction for San Fernando Valley State, was promoted to acting university president after his predecessor, Paul Blomgren, was hospitalized for his diabetes. Despite the Oviatt name being central to the CSUN community today, Delmar T. Oviatt resigned in February 1969 after only being promoted in January.

4. The Northridge Earthquake of 1994 was not the first 6.7 earthquake to devastate CSUN.

While Northridge is often relative of the 1994 earthquake, in 1971, the campus was sent into disarray from the Sylmar – San Fernando Earthquake, which also had a magnitude of 6.7. CSUN still has pieces of school structures that were destroyed in the Northridge earthquake. The memorial is on campus near the Matador bookstore and the Soraya.

5. A pig ran for Homecoming Queen.

6. John Elway’s father was once the football coach.

Last year, ESPN gathered a panel of experts that determined that John Elway was the fourth greatest football player of all-time. His father, Jack Elway coached CSUN’s football team from 1976 to 1978 while John Elway was playing football next door for Granada Hills High School. After John graduated high school and committed Stanford, Jack Elway took an offer to coach San Jose State’s football program. The CSUN football program was cut in 2001 due to a budget crisis in the athletic department and the need to balance gender in sports.

7. The campus Juice It Up! was once a Jamba Juice.

CSUN’s resident blended juice stop wasn’t always Juice It Up! The space in the university’s bookstore complex was previously occupied by competitor Jamba Juice. It wasn’t until 2007 when Juice It Up moved in, replacing Jamba Juice. In the same vein, Panda Express replaced a restaurant named Rice Garden in 2007 as well.