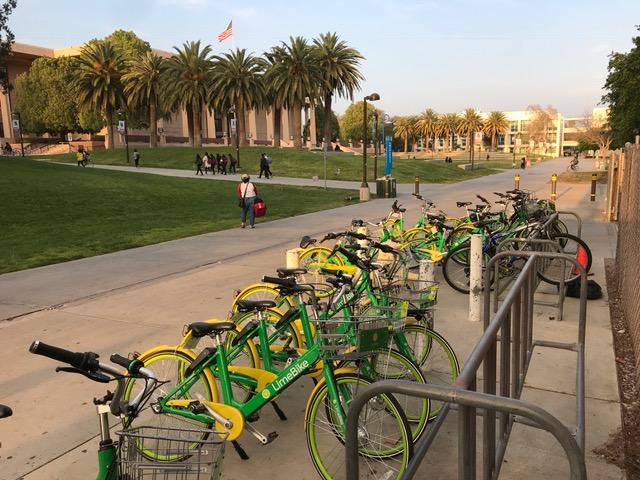 Eduardo Martinez would walk home at night on several occasions before the LimeBike program because of his involvement on campus. LimeBike allowed the sophomore marketing major to ride a bike home and feel safe at night.

Martinez now lives in a red zone area, where bikes cannot be parked. An update on the LimeBike app now alerts students if they park in any “red areas” that are considered no parking areas. Martinez lives on Nordhoff Street and Lindley Avenue and won’t be able to ride the bike home.

“When I ride the bike home and I leave it parked outside my home, I get a notification saying ‘parking in this area is not allowed and will lead to a fine or the account getting suspended,’” said Martinez.

Without knowing it, CSUN LimeBike riders were breaking a regulation in the university’s contract with the bike-share company by leaving bikes on sidewalks, private property and blocking designated areas under the Americans with Disability Act (ADA).

The update on the LimeBike app was added after local residents complained about finding the green and yellow bikes on their property. The community surrounding the campus has filed over 40 complaints of students leaving bikes on sidewalks, private property, ADA areas and in front of local business.

“Repeatedly parking in these areas may lead to a fine or suspension of your account,” Austin Erikson, director of energy and sustainability at CSUN, said.

In the contract between the university and LimeBike, it states that the licensed property must not affect university streets or sidewalks, or create any conditions which can be a threat to public safety.

A total of 400 bikes were put on the CSUN campus with half of them placed near the dorms and the other half distributed on campus.

“I brought the program for the students. Students can take them from wherever they need to go. Students caught up to this program incredibly quickly that there was no need to market the bikes,” said Ken Premo, Associated Students manager of support services.

When LimeBikes were introduced to CSUN students at the start of the semester, students weren’t educated on where they can and can’t ride and park bikes.

The contract states that both parties must agree on the boundaries of “Geo-Zones.” Geo-Zone areas indicate, where bikes are currently located and where they should be parked. An operational team was created to remove any improperly parked bikes in a certain time frame and as well as any inoperable bikes. According to Erikson, the contract does not specify where bikes can be ridden.

Community members have taken their complaints to Neighborhood Council meetings and to the office of L.A City Councilman Mitchell Englander.

“The contract states that LimeBikes are to remain on campus. Getting students where they need to get to is immaterial to the contract,” said Englander.

“I spoke with representatives of LimeBike shortly after the initial launch to address the complaints of the community members,” said Englander. They told me then that they were pursuing a geo-fencing solution and I’m pleased to see that they were prompt in making the update.”