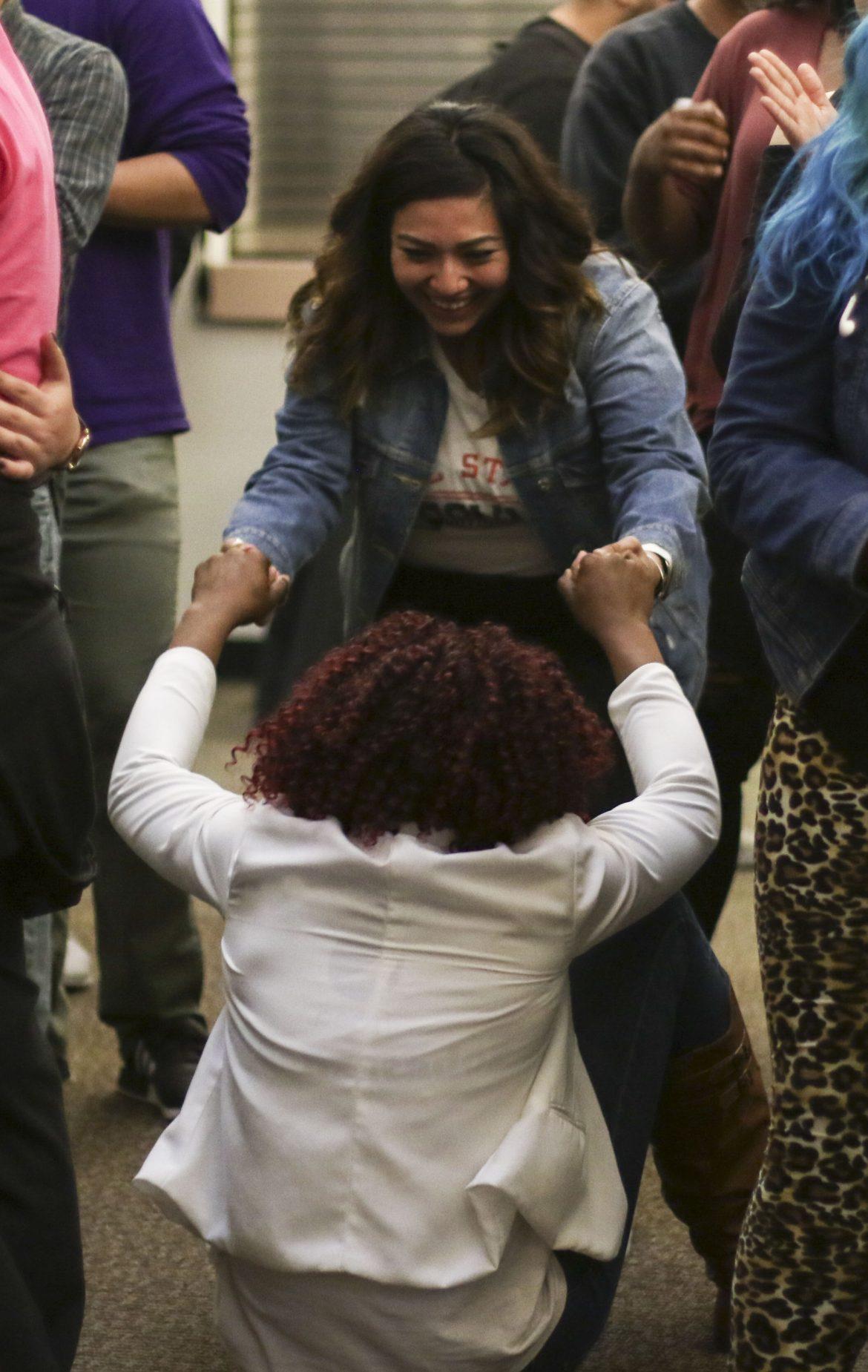 New Vice President Rose Merida helps up new President Beverly Ntagu after being revieled that they have won the their positions for office on Thursday night at Thousand Oaks room. Photo credit: Daniel Valencia

The Thousand Oaks room was filled with loud cheers and excited smiles when Beverly Ntagu and Rose Merida became the new Associated Students President and Vice President on April 5.

Ntagu replaced Diana Vicente as the presidential candidate from “The Matador Movement” slate after Vicente was found ineligible to run in the 2018 election. A.S. held a Judicial Court hearing Monday, March 26, where it was decided that Vicente, a former member of the Election Committee, violated the elections code preventing Election Committee members from running in the same academic year.

Presidential candidate Alex Canas, who was running against Vicente, filed the complaint about the violation.

Vicente served as A.S. chair of elections from June 2017 to March 2018 but resigned the first week of March before filing closed to run for election.

“The decision that was made has had a big effect on me for I am out of a job now and feel robbed of an opportunity that I believe every student should have,” Vicente said.

Chief Justice Arthur Zverev said that is is possible that Vicente knew she would be violating the election code but the way A.S. codes are written, it is more than likely she was unaware that she was violating an election code.

A.S. President Jonathan Goldenberg says he believes there was no malicious intent by any party involved.

“Some people use this case to paint Diana in a negative light and I think that is not fair,” Goldenberg said. “I don’t think that was the type of person who would purposely try to break the rules and I think any interpretation of her breaking the rules for personal benefit is an inaccurate representation of her as a leader.”

Last year, vice presidential candidate Erika Villalvazo was denied eligibility to run. As a result, the A.S. senate went through the elections code and made edits that gave candidates more flexibility in finding a replacement.

The change to the elections code that was implemented last year allowed “The Matador Movement” vice presidential candidate, Merida, to find a replacement.

“Seeing the fact that a candidate was disqualified based off a misunderstanding and something that could’ve been avoided, I think that post-election the Senate is going to go back and look through the code,” Goldenberg said. “They will either make the rules more specific so there is no miscommunication or they will go back and make it clear that the chair of elections is allowed to run. I think post-election season we’re going to clean up the election code to make it more transparent and streamlined.”