Why is there a new window on the side of Sierra Hall? 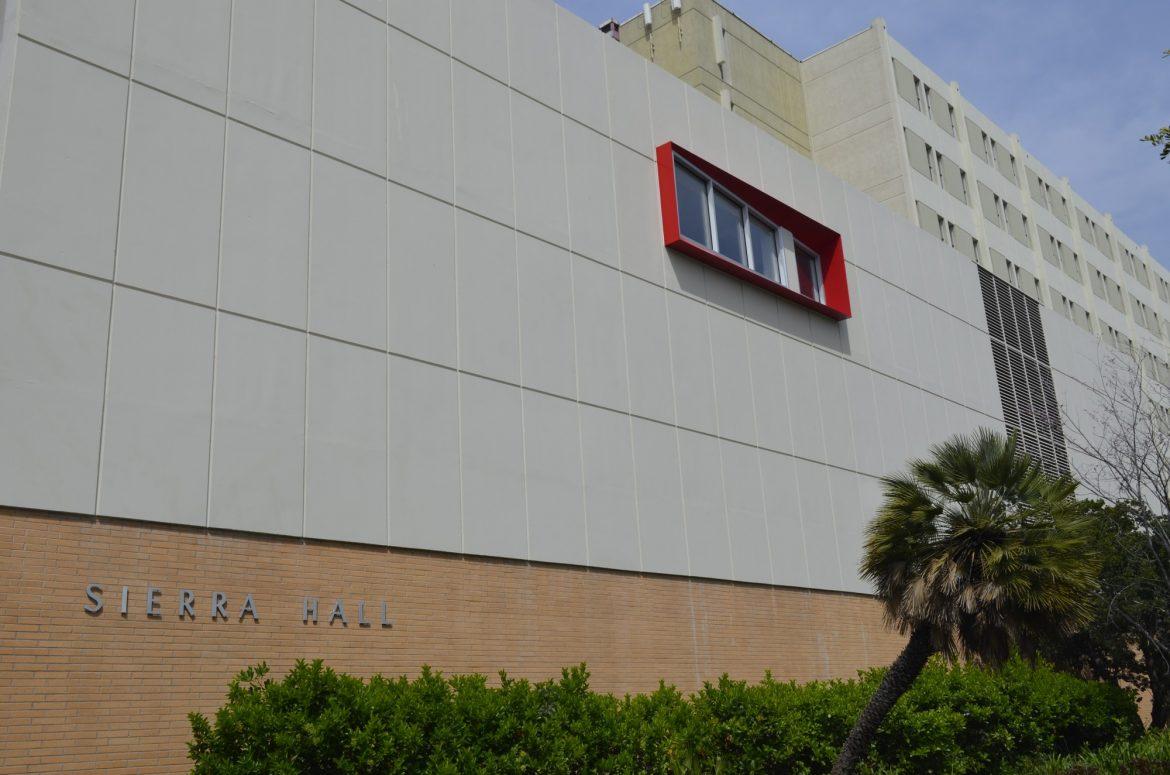 A bright red window appeared recently jutting out of the off-white east wall of Sierra Hall after a brief period of construction last month.

The window extends out from the wall on the third floor looking out on the Oviatt lawn and contains a revamped work space.

The new structure appears to be a new student center built for the College of Social and Behavioral Sciences (CSBS) featuring a classroom-sized space filled with several circular tables, executive office recliner chairs, and a presentation board.

Neither Physical Plant Management, Facilities Planning, or the Office of Student Success Innovations had any information on the new structure or its purpose.

A sign on the door posts the hours of operation, however the doors have remained locked.

Jennifer Brummett, assistant to interim (CSBS) dean Dr. Matthew Cahn, says the doors have remained locked due to final improvements being made to the space but had no other information.

Brummett said Cahn would have all the details surrounding the construction and implementation of the mysterious work space.

The CSBS opened up it’s new Student Success Center on April 16, 2018 lifting the mystery off of the newly constructed room featuring a peculiar red window seen from the east wall exterior on the third floor of Sierra Hall.

The center will provide students with a space to study, relax, use computers, or meet in groups, or otherwise occupy time between classes.

The concept for the center began with former CSBS dean and current Vice Provost Stella Theodoulou who recognized the need to create a space for students, according to CSBS.

“Up to now, students have had few options finding space in Sierra Hall to spend time productively between classes,” Interim Dean Dr. Matthew Cahn said. “Many students end up sitting in the halls.”

Construction for the center began last fall and concluded in spring of this year. The center remained closed for most of spring semester awaiting furniture and some finishing touches.

Public discussion about the new construction and purpose of the space seems to have been limited leaving many students to wonder what this room with a red window contains.

“Everyone else was quiet [so] I didn’t want to disturb anyone else,” Patterson said.

Patterson used to sit outside the area where the center was being constructed.

“Unless you’ve been up here on the third floor, you don’t know what it is,” Patterson said.

The center was financed via a number of sources including revenues from College of Extended Learning programs and funds from CSBS and Provost’s office that was earmarked for operational expenses.

“Sierra Hall is one of the oldest buildings on campus and periodic investment keeps the facility functional as the number of students increases and the technology changes,” Cahn said.