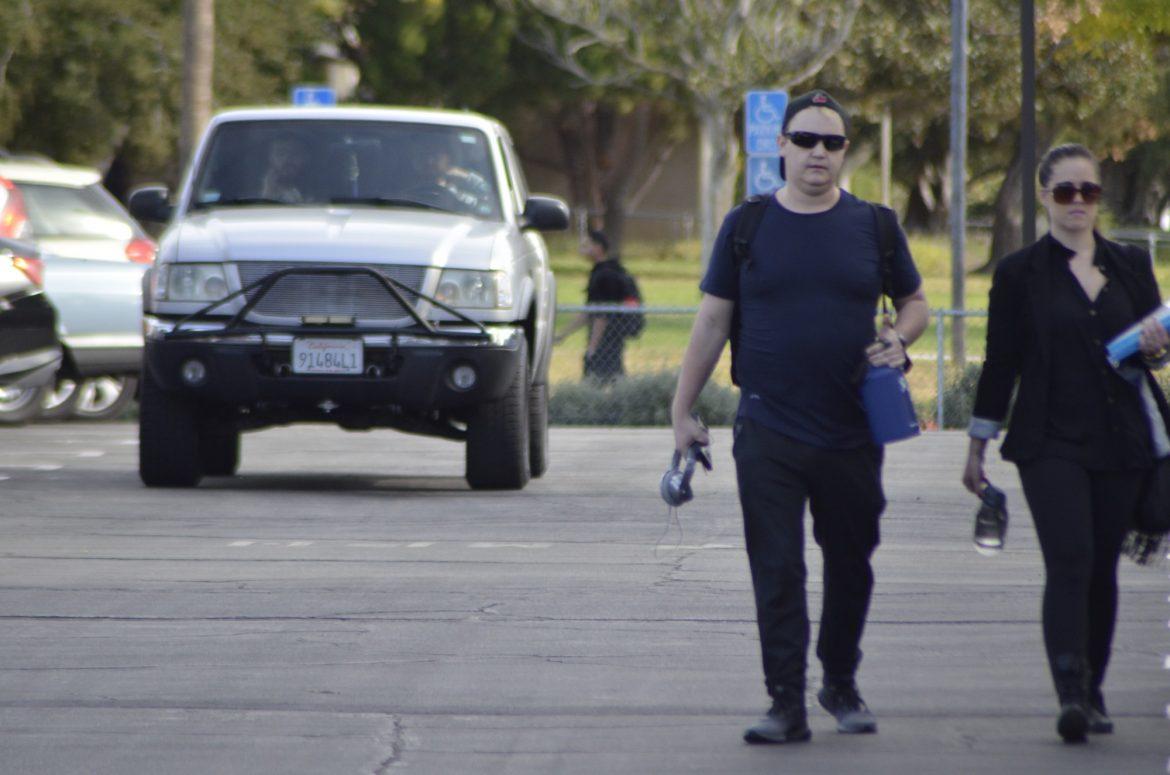 Andrew Crabtree and Megan McDonald walk to their vehicle in student lot B1, followed by a vehicle waiting for a vacancy. Photo credit: Nick Rose

The beginning of spring semester was supposed to kick off with game-changing improvements to the way CSUN students park on campus. The Mobile Now! parking permit app released on schedule and 118 spaces were added to the B5 lot, but the parking guidance system suffered setbacks, according to Parking and Transportation Services Manager Michael Yu. The system will be postponed until sometime over the summer.

Yu explained the costs of installing this system were more than anticipated. The costs surpassed the threshold the department could authorize purchase without undergoing a lengthy bidding process.

Stephanie Barboza, marketing and Chicano literature double major, is more hopeful for the new system. Barboza, sophomore, has spent a lot of time driving in circles to find parking and would appreciate knowing when lots are full so she can move on.

“At least you know your time wasn’t wasted,” Barboza said.

Ultimately, Yu’s office is using the Job Order Contracts (JOC) process which allowed them to contract with a pre-authorized company to build and install the system without having to solicit bids. Yu explained the JOC process ends up costing a little more in the end but his department justified the expense as a way to get the program available to students sooner.

The new guidance system, AutoCount, is one Yu has seen before having already unrolled it on the campus of CSU Fullerton in 2015.

The system will feature accessibility using the existing CSUN app allowing students to see quantities of available spots in each of the campus lots in real time. Physical signage will also be in place at entrances to the lots so that students driving by will have the information they need to either park, or drive on to another lot with vacancies.

Yu believes AutoCount will improve the efficiency of parking cutting down the time students need to find a space thereby reducing traffic and emissions.

Some students like fourth-year CTVA major, Melora Rini, are skeptical of the system’s utility saying they’ve seen similar installments elsewhere that failed to perform. Rini said she’s seen similar systems at Burbank Town Center and Dave & Buster’s in Hollywood that made her the victim of bad information.

“You’d be surprised. It glitches a lot,” Rini said.

Other required improvements may have longer to wait such as the re-design of the B3 structure. Yu admitted in fall of 2017 that the design of the structure was fundamentally flawed.

“[We’re] going to need a large-scale solution for the design and layout of B3,” Yu said.

In the meantime, Yu said he’s already noticed a slight decrease in campus traffic as of the start of spring semester and notes fewer permits have been sold. Yu attributes the change largely to LimeBike, which he says has been generally popular, and the Metro U-Pass which sold 1,600 passes in 2017 taking that many more students out of the rat race for parking.

Yu praises LimeBike for its role in alleviating parking and traffic stresses while offering zero emissions and promoting health and wellness.

“I’m hoping it’s around for a long time,” Yu said.