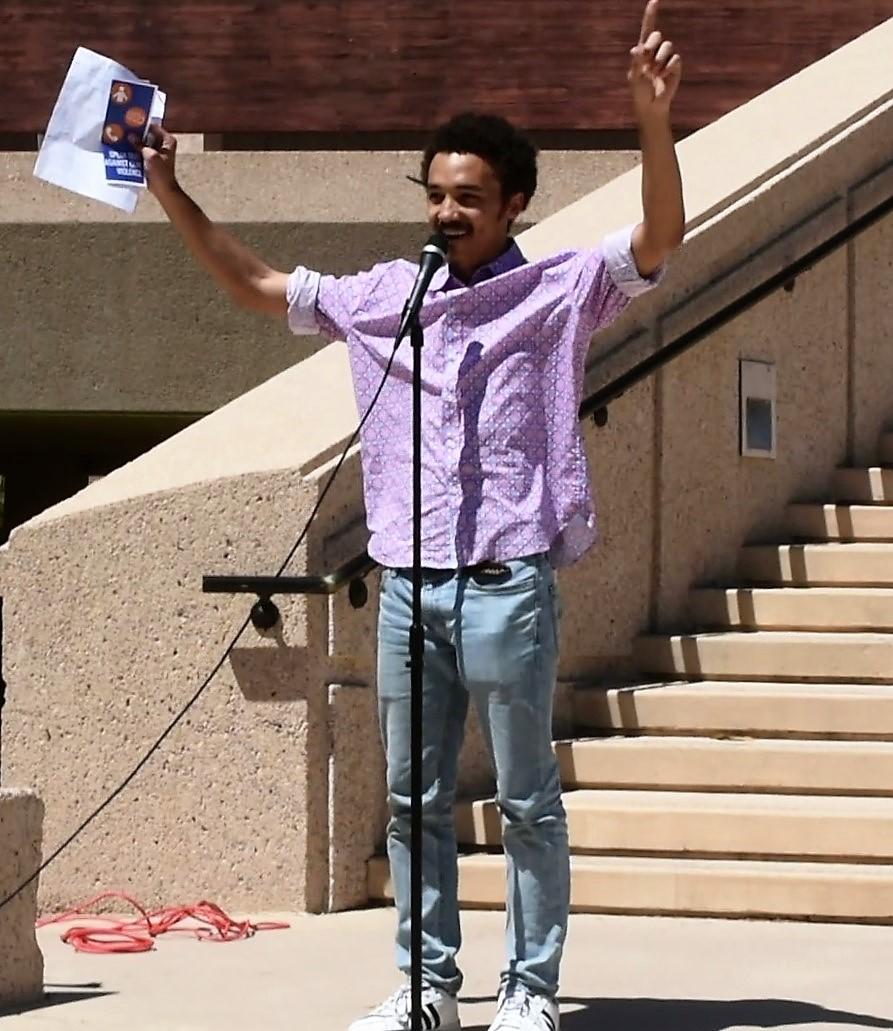 Michael Meeks, sophomore and president of CSUN club Students for Political Decency, speaks out at the Speak Out! Against Gun Violence rally. Photo credit: Tamara Shapiro

This was the rally cry of the few who gathered on the Oviatt Lawn to speak out against gun violence on April 20, the 19th anniversary of the Columbine high school massacre in Colorado.

The rally, hosted by Students for Political Decency, was there to protest congressional state and local failures to take action and prevent gun violence. Community members and students were encouraged to register to vote and take part in phone banking, or calling local representatives to address gun control, later on at the Matador Square.

President Michael Meeks and Vice President Samantha Crende led the event and introduced speakers who reminded the crowd of Columbine, Parkland and Stephon Clark, an unarmed black man who was killed by police in Sacramento last month.

“As long as a member of the black community is five times more likely to die in a police shooting than a white man of the same age, we must acknowledge that race matters in our efforts to end gun violence.” Dr. Theresa Montano, professor of Chicano studies, said. “There have been 33 school shootings in California since Columbine, 51 deaths and 136 injuries. At total of 1,300 children in the United States die every year from gun shot wounds.”

Montano also mentioned Amir Asgari, a CSUN professor who was shot by a former student over a grade back in 1987.

Daeja Lee, a 19-year-old biochemistry major who participated in phone banking, is against firearm ownership because she believes people take advantage of it. “Even though its used as a weapon in self-defense, you know somebody could be mad at a person and just shoot them, just for their personal [reasons].”

Crende was disappointed by the small turnout and lack of student presence, but hopeful for more involvement in the fall semester.

“There’s been a huge spike in registered voters in the past few months alone, so that gives me hope that this will continue to go as strong as it started.” Crende confirmed when asked about the movement to end gun violence.

Among the speakers were Professor Crystal Marie Sanchez of the Criminal Justice Department, Professor Joannie Busillo-Aguayo of the Department of Education and President Kaya Tillery of CSUN’s Black Student Union.