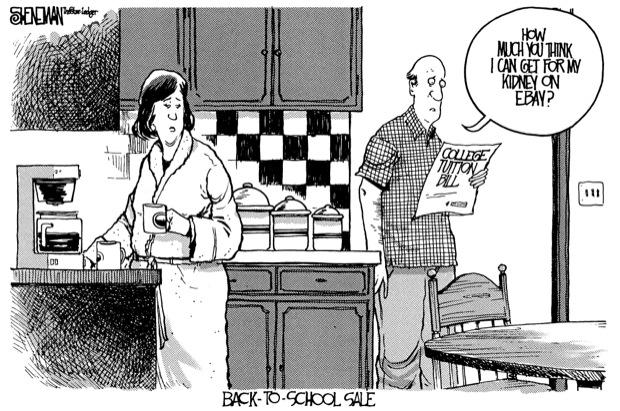 Summer has always been associated with fun, relaxation, and a time to escape the stress as a student. Well, at least that’s what most of us are accustomed to. It couldn’t be any further from the truth for California State University students.

Going into my fifth year and what was intended to be my last semester, I now have to plan out a full year due to the Cal State budget cuts and fee increases. Not only does this impede my graduation plans, but raises the question of whether or not I’ll graduate. The thought of this is absurd, even laughable. At this point you can forget about a four-year graduation plan and replace it with a six-year plan.

Simultaneously, as students plan for a five and six-year plan, high school students looking to advance in higher education are being turned away as a result of these cuts.

The problems started when I checked my financial aid information and found I had received none. My heart dropped to the floor. I kept going back each day hoping it had changed.

The past four years, I’ve been a financial aid recipient. I didn’t know where to aim my frustration. All I could think about was how would I pay for school and it made me sick.

As this semester approached, I scrambled for answers. The plan was to quit my job in order to focus on what I thought would be my last semester, and apply to grad school. Sadly to my surprise, this would not happen. I no longer had a choice; working was not an option, it was a necessity.

By keeping my job, I faced yet another dilemma. If I kept working, I wouldn’t be able to take the final classes I needed to finish in December. This comes as a result of the few classes being offered as well as having my job schedule conflict with my class schedule. Therefore, for the first time in five years I had no other choice but to enroll at CSUN as a part-time student.

As if I wasn’t furious enough, CSUN sent out a letter that informed students about the increase in tuition. This is in addition to the 10 percent that was announced in the spring semester. As a freshman in 2005, tuition was around $1,600 per semester. It’s strange that financial aid awards would decrease while tuition continues to increase.

OK, tuition is not as high as the University of California systems, but it remains unnerving. I’m not sure who is to blame, but the blame game is not the answer. The government, CSU system and students of these institutions need to join together to fix this. We need our state-funded education back without the hurdles we’ve been presented with the past few months.

As the budget cuts and fee increases only get worse, we the students are seeing the direct consequences even more. As students, we need to see what we can do to better the situation, not as individuals, but as a whole. As demoralizing as it is, we need to keep a positive attitude. We need to believe that what we say does really matter. It is not wishful thinking but rather believing that we are a public institution driven by students who want to learn.

I understand everyone is affected by the budget cuts. School and faculty have had to take furlough days, but do they really understand the struggles students are going through?

We’ve paid our dues. Confidence is running thin during these harsh times, and one question continues to run through my head. How much longer will I have to spend here to get my degree?