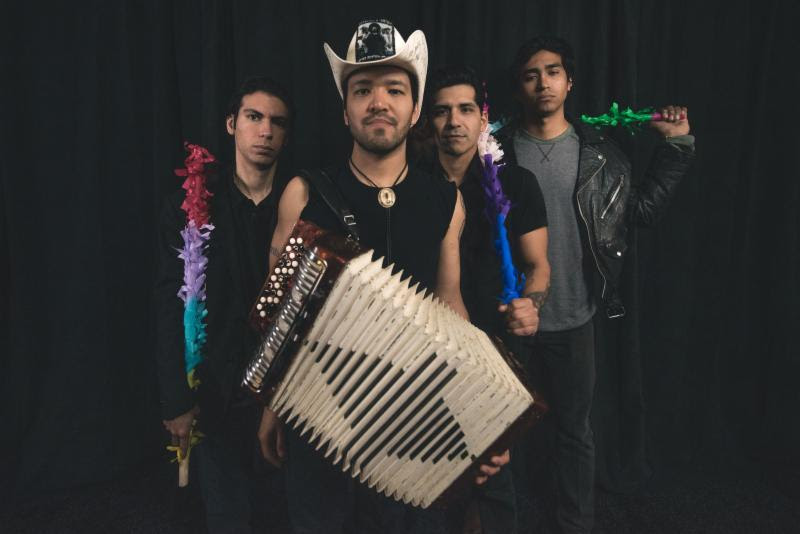 With a band name like Piñata Protest, the music should be nothing less than an utter desmadre at a Quinceañera. The San Antonio, Texas natives will be touring the L.A. region next month.

What began as a hobby for lead singer and accordionist Alvaro Del Norte, his small-time passion grew into a band now promoting their third album with a tour across the U.S. Necio Nights is full of traditional Mexican Norteño, Ranchera, and Cumbia music with a high dose of punk that puts the listener into a state of adrenaline, the perfect elements for any mosh-pit lovers out there.

When Del Norte was figuring out a name for his band he wasn’t aware that piñata protest was already an established term. A piñata protest is a political demonstration where people make a piñata resembling the person the person or thing they are protesting against and beat the crap out of it. It fits perfectly with the rebellious attitude of the punk genre.

The group collaborated with other bands including Brujeria and The Beastie Boys. This and other insightful details about their latest release is what Del Norte shared in a personal interview with The Sundial.

Where would you say your biggest fan-base is located?

Del Norte: Definitely San Antonio, and it makes sense cause we’re from here. We’ve played here the longest. Basically where there is more raza is where we have our biggest fan bases.

Are there some heavy moshpits during your concerts?

Del Norte: I think it’s a bit of both man. Sometimes people are dancing in partners like in the traditional Norteño sound. Half of the time they’re moshing or skanking. I think we have a wide range of sound and the dancing styles go along with the genres we’re playing.

What made you pursue this genre for your music career?

Del Norte: I think it was an unfound love of the music my parents grew up listening to. The music that your parents listen to I think, for a lot of kids, it’s lame, you know, it’s not fun. You want to listen to what your friends are listening to. My friends were listening to punk and rock and roll. But later on life after I got out of high school I went into this kind of soul searching and that included listening to a lot of the music I listened to as a little kid. That’s how I fell in love with it. And then other things began happening in my life, musically. I got out of the band [I had been playing in] for the last three years and I said I was going to try and make something really different. Something that’s never been done. Something true to me and honestly I wasn’t even planning on making music full time, it was just going to be my little passion, a weekend hobby. Just go out with my friends and play shows at little bars, but it really grew. I’m happy for that.

Was this the first time you included so many collaborations within your album?

Del Norte: Definitely. Before, we didn’t have anything like that. We want to continue it in the future. We recorded this album in Long Beach. We just really wanted to get the California punk sound. We happened to be in a place where a lot of musician friends lived around and they’re not too far away so we invited them into the studio and we got some tracks.

What was your experience opening for a band like Molotov?

Del Norte: It was a lot of fun. It was a good band to connect with because their fans are not too different from ours. They have similar taste. But I also like being with bands that are different from us. We’ve done a lot of touring with brujeria and their crows are pretty different. It’s like a challenge to get their fans to like your show.

Do you make music just to have fun or do you aim to make more serious statements with it?

Del Norte: We show a more fun side of the band but we definitely have other songs that touch on a lot of social issues. I was a mojado (a Spanish slang term for undocumented) for a big part of my life and I’m very proud of that. I lived the immigrant experience of having to hide from la migra (ICE) and having my family members deported. We have songs that touch on that subject, about immigration. There’s a song called “Al rato cruzamos la frontera” (“later we’ll cross the border”). It’s a fictional tale but it’s based on my experiences while growing up. Down the line, I think it’s important for artists—it’s almost like a responsibility—when you have an opportunity to point out certain issues to society, you just don’t stand there. You should call attention to it.

Who is your favorite accordionist?

Del Norte: Ramon Ayala is probably my top one. I love listening to him when I’m sober or drunk, especially when I’m drunk.