CSUN Takes Two Out of Three from UCSB 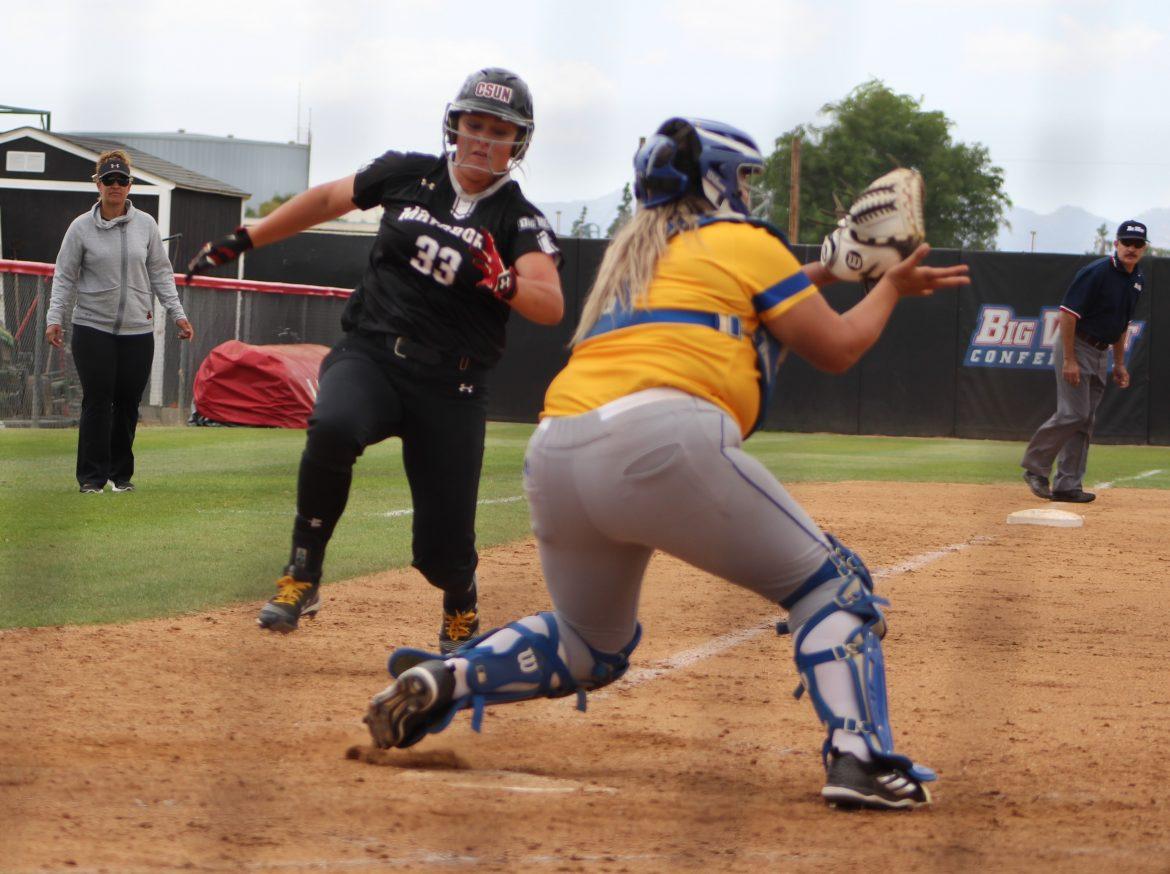 After a two-week road trip, softball returned home to host UC Santa Barbara and won the series downing the Gauchos in the second and third games last weekend.

On Saturday, game one of the doubleheader, UC Santa Barbara outperformed CSUN 9-5 to start off the series.

With two outs in the first inning, the Gauchos had the bases loaded when CSUN pitcher Jillian James, who leads the team in strikeouts, appeared to have struck out UCSB Samantha Lujan with the bases loaded on a full count to end the inning. Instead, James was called for her third illegal pitch of the inning and resulted in a walk to score the third run for the Gauchos.

The Gauchos took the momentum from the first inning, and never looked back from there as they scored three runs in the second inning off of James and three more runs in the fifth.

Jessica Alexander led the offense with two hits, while Savannah Horvath hit a two-run home run in the first inning. That was Horvath’s 49th career home run, five away from the Big West record.

In game two, CSUN scored first with five runs in the first inning. The Matadors scored three more runs late in the game and went on to win 8-1.

“I think our players did a good job of rebounding after the first game,” said CSUN coach Tiaria Flowers. “The first game we were making contact, but it wasn’t really paying off for us. We just got to be able to hit our spots a little better in the circle. I definitely thought that everybody did a good job setting the tone and coming out aggressive in the first inning of game two.”

CSUN sent out sophomore pitcher Cheyenne Noli for her first start of the season. Noli tossed 98 pitches to earn a complete-game and only allowed one un-earned run, six hits and one walk.

“I was going out there with full confidence and my defense,” Noli said. “I know I had to use them because I am not really a strikeout pitcher, I am more of a ground ball pitcher based on what I throw. I really just focused on getting balls hit to the defense. We picked each other up when we needed help, this is one of our best games of the season.”

CSUN’s Megan Stevens led the offense with two hits and a two-run home run in the sixth to make it 8-1. The win snapped the Matador’s four-game losing streak.

Horvath went 1-for-2 with two stolen bases while being hit by two pitches.

“I think after the first game we had our heads knocked in a little bit,” Horvath said. “But we came back and we found the fight, the drive, the perseverance and weren’t going to let them stop us. Our approach was to come out and attack, we came out slow in the first game. We jumped out early and didn’t give them a chance to breath.”

In the final game, CSUN carried their momentum over from game two and exploded with 12 hits, clinching the series with a 13-5 win.

The Matadors opened up the game with four runs in the first inning and proved to be the beginning of many runs to come to take two out of three against the Gauchos.

CSUN’s Mackenzie Babbitt and Jessica Alexander led the offense in game three to combine 5-for-6 at the plate with six runs scored and two runs batted in.

Four Matadors had multiple hits during game three, including CSUN’s Journey Rojas who went 2-for-3 and led the team with three RBIs.

In the series, Alexander went 6-for-10, with five runs, four RBI’s, one home run, a double and a stolen base for the Matadors. Stevens went 4-for-10, with a team-high five RBI’s, five runs and two home runs.

“Staying aggressive and not being overly confident,” said Flowers. “If they punch first, its going to be tough for us to bounce back, so we have to take control. They are a good program, they hit really well, they got some good pitchers and we have to be able to capitalize when we get people in scoring position. We proved that today.”

The team will travel to Hawai’i for a conference series with the Wahine. The series gets going Friday at 9 p.m.