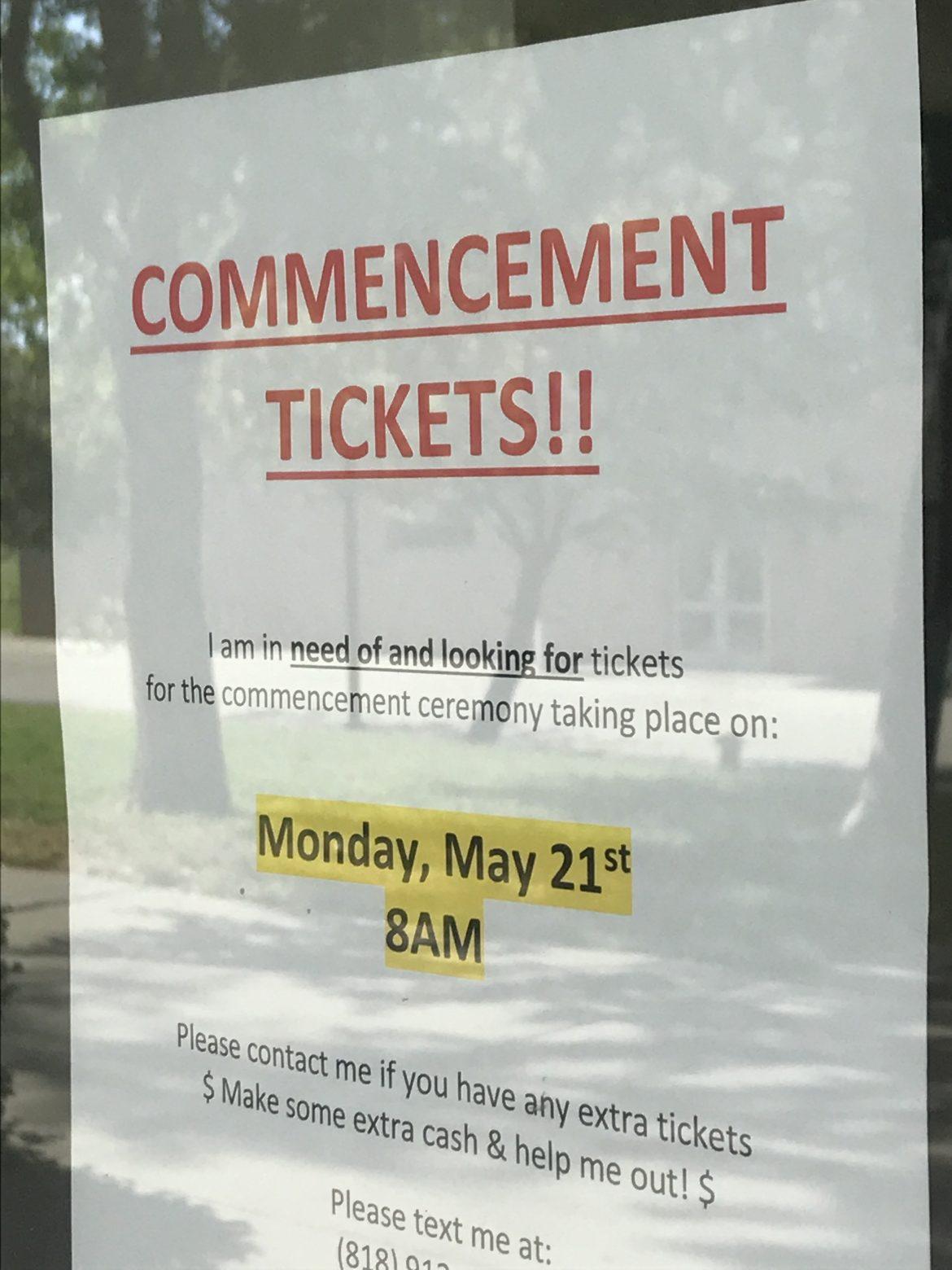 With graduation being important for many students and their families, some have taken matters into their own hands to obtain extra commencement tickets. Social media posts and fliers on campus seeking additional tickets have been liberally distributed by students over the past few months.

CSUN’s ceremony attendance is organized by allocating a limited amount of guest tickets for each student. Guests without tickets will not be admitted into the ceremonies. Without a re-sale market, graduating students with large families have to be selective with who gets their tickets.

According to this year’s CSUN Commencement handbook, reselling graduation tickets is considered a “misuse of CSUN property,” with students facing a “disciplinary action” from the Dean of Students.

So what sort of disciplinary actions do students in the re-sale market actually face? According to Samuel Lingrosso, CSUN’s Director of Student Conduct and Ethical Development, these actions have yet to be handed out.

“Students have respected the ticketing process in the past,” Lingrosso said. “It’s not about making money, it’s about making sure everyone is safe.”

According to Lingrosso, he never had to punish a student for re-selling graduation tickets. He believes these university policies for limiting entrance to graduation ceremonies are for safety precautions, and the rules against re-selling tickets are to prevent students from commodifying their graduation, and protecting them from potentially fraudulent ticket sales.

Lingrosso believes that while ticket re-sales are technically against the university’s policy, the university is more focused on preventing an unsafe ticketing environment.

“Let’s say a student is only given access to seven tickets and they have 10 family members [and is looking to bring all of them]. That’s technically not allowed, but I’m probably not going to impose a sanction,” Lingrosso said.

So how should the university accommodate graduating students in need of additional graduation tickets? Carla Valdovinos, a graduating political science major, suggested a potential solution.

“Maybe we could have a general admission pass,” Valdovinos said. “[the university] could give out unclaimed tickets to those who need them before graduation.”

The university takes a similar approach to what Valdovinos suggested. Students may request additional tickets through the CSUN AccountManager, where additional tickets from a pool of forfeited or unclaimed graduation tickets are distributed for those who need extra tickets.

However, this program has its drawbacks. With a significant seller’s market, students with additional tickets have very little incentive to forfeit their tickets when they can turn a profit by selling them. Students are also not informed about their extra tickets until the beginning of May.

Graduation ceremonies begin on Friday, May 18 and run until Monday, May 21.