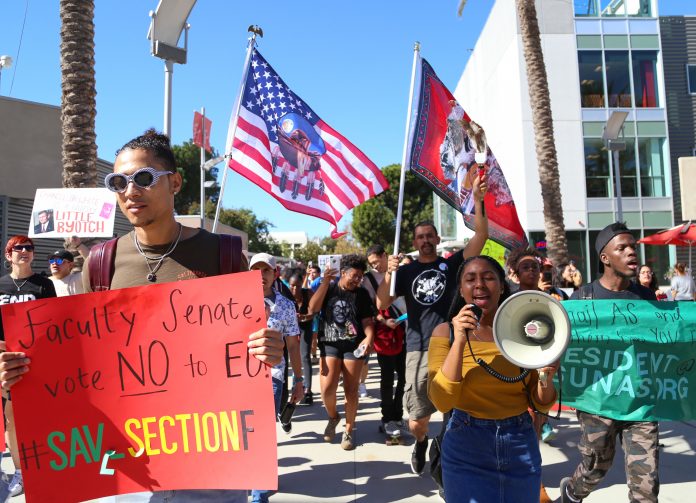 CSU Chancellor Timothy White issued Executive Order 1100, an order that would eliminate the requirement of ethnic, gender, women’s and cultural studies classes in Section F along with other changes to the General Education Plan in November.

Students voiced their opposition through protests and boycotts with a week-long plan of action. The opposition against EO 1100 resulted in the Faculty Senate voting to not implement the executive order. Afterward, White signed an agreement stating CSUN can keep section F.

According to Faculty Senate President Adam Swenson, student activism was crucial in the vote to not implement EO 1100. Before the week of action, Swenson thought it would be possible for CSUN to keep section F. He thought it would be unlikely because if the Chancellor’s office gave CSUN an exception, other campuses would want exceptions as well.

Day three of the week of action, the day before the Senate meeting to vote whether to implement EO 1100, there was a march to university hall. Swenson said he received a call from CSUN President Diane Harrison and said Chancellor White was willing to talk.

“[Harrison] had been bugging them for as much as I have but the night before Senate meeting was when the Chancellor decided ‘I need to give in here,'” Swenson said. “I can say unequivocally that if it wasn’t for the student activism [the chancellor’s office] would’ve thought it was faculty whining and would not have gotten a complete recognition that our program needs to be the way it is where section F is its own area.”

“Some campuses have been given a limited extension to that fall 2018 start date so faculty can make curricular adjustments that will meet policy intentions for clarity of requirements, equitable opportunity for student success, and streamlined degree completion,” Chapin said.

Douglas Carranza, department chair of Central American studies, said the week-long plan of action played an important role on whether EO 1100 would be implemented because it would have been detrimental to what CSUN has been developing for years.

“We participated actively and made it quite clear that we do not support the imposition of section F,” Carranza said. “I believe that many departments and faculty were and continue to be in opposition to this Executive Order that instead of advancing our curriculum it is taking us back to the 1950s.”

Swenson believes that if there was no student activism, the senate still would’ve voted the way it did but with a few different variables.

“We still would’ve had probably the courses and the enrollment but we would’ve lost the thing that is really distinctive and really important, which would be the symbolic value,” Swenson said. “It’s really important. It’s an affirmation of our values, so I don’t think either [Harrison] or I would’ve been able to convince them to fully accept this.”

Carranza pointed out that CSUN is the only university in the CSU system that has six sections of general education requirements, the sixth being Section F: comparative cultural studies. Carranza said activism is important because students and faculty exercised their right to express their ideas.

Carranza said the activism was important because, during the 1960s, people were fighting to open up spaces as the civil rights movement progressed. During this time, CSUN fought to have Africana, Chicano, Native American, and other ethnic studies departments.

“Implementing the executive order would’ve taken us back in terms of not understanding how the U.S. society has changed,” Carranza said. “We have different types of communities and issues that need to be addressed or readdressed such as racism and a different way of understanding U.S. culture.”