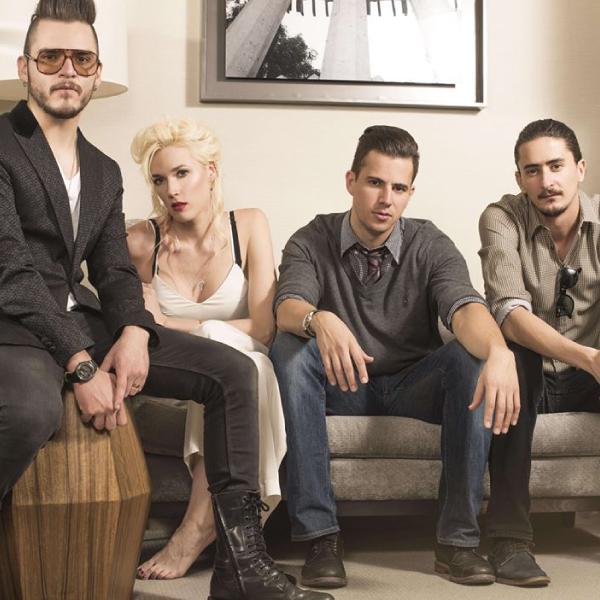 Jenny and The Mexicats see themselves as a fusion of nationalities and personalities coming together to make music. Photo Credit: courtesy of The Music Joint

Although many musicians travel the world, very few captivate an aventurero spirit within their sound. For Jenny and The Mexicats, it’s no surprise that their songs are personal stories accompanied by rhythms and melodies made from instruments all over the world, given that the story of the band itself is that of an English woman moving to Spain in search of a musical adventure. With the help of a Spaniard and two other Mexican men they are now presenting their latest album, “Open Sea/ Mar Abierto.”

With songs in English and Spanish such as “La Diabla,” “Amplifire” and “Lion”, listeners will be able to get a taste of their diverse influences from folkloric genres like flamenco, veracruzano, jazz and country music. This has not only excited fans all over the world, but it has helped them get their foot in the door of many countries where their music is not known. Ten years later, they’re still not tired of visiting new places in the world. One of them being Los Angeles’ infamous Pershing Square on July 28 for a free concert with other local artists.

Formerly known as Los Pachucos y La Princesa in 2008, the band began playing in local venues of Madrid, Spain. What followed were continuous re-locations until finally setting in Mexico City, where they currently reside. To know more about their music and their upcoming performance, The Sundial spoke to Jenny Ball, lead singer and trumpet player of the Mexicats.

I’d like to begin with the cover of the album because I see that it is important to the concept you are presenting, did Pantera, guitarist of the Mexicats, also design the cover of this album?

Ball: He didn’t do the one for “Mar Abierto,” we were working with another artist… I have the memory of a fish. I forgot his name, but it’s an artist from Malakai. He’s Spanish but lives in Norway. He graffitied the original artwork and then he scanned it to add digital details to it. We had been talking to him before the release of the album. We’re happy with it; I think it says a lot.

It does. I think that it is a central piece to the theme you were aiming for, would you agree? What’s the idea with “Open Sea?”

Ball: Yeah, we explained the idea of the album and he took it from there. It’s like a continuous thing that water connects everything. In our three albums we have taken the original songs of our first year or two. We’ve redone them and have new songs that are out at this moment. For example, “La Diabla” is a merengue in “Open Sea” which had the original verses, but we made it more dancy.

Since you are talking about songs, what can you tell me about “Canela y Azabache?” How was that song created?

Ball: That song is a collaboration with Pantera. He is married to a flamenco dancer and it’s a work about her dancing. It’s really pretty. There’s more of a Spanishy angle to it. We’re actually a band from Madrid and we met in a Flamenco venue where two Mexicans of the band were working. One was a sound technician studying flamenco and the other a waiter. They let us use the place as our rehearsal place. We would rehearse with the lights on stage during the daytime, and then at night they would come and do the flamenco show, so we have a lot of experience. There’s a violin player called El Guadiano. He played the violin solo at the end of the song. It’s different. We have a touch of Spain in all our albums, if you listen to our second one there’s a song called “Este Momento”, so if you really liked this one you can check it out.

Recently you played at NPR’s Tiny Desk Concert Series, but why was it so short?

Ball: Usually the concerts are pretty short, only about three songs, unless they have someone special. We were like, ‘Shit! How can we say everything we want to say in three songs!’ We did a song all in Spanish, “Verde Mas Alla,” [and] we did one in English, “The Song for the UV House Mouse,” which has the drum and bass in it. I love playing that song because it shows the musicality of the band. At Tiny Desk, there are no monitors for anybody so you can’t hear anybody else than yourself. It was a challenge. And then, the first song was in Spanglish, “Frenetico Ritmo” because we wanted to show our mess.

Are you guys still being self-managed? You guys are probably one of the few truly independent bands out there.

Ball: Yeah, we still do. We’ve had contracts in the past that didn’t really work out for us. All our music is under Mexicat records, our label. Our bass player does the management side and in Mexico he is the manager, and in other countries we have someone there working with us, but we don’t have a label yet. We’ve taken care of our music and it’s quite important to us. We had a label that wanted to change our sound but since then we’ve established ourselves and we’re happy with that.

What’s your technique for getting your foot in the door in a place where your music is not so well-known?

Ball: Often it’s the Mexicans that help us. They’re all over the world. We are quite boldly, especially places we’ve never been before. If we want to go to a place we’ve never been to, we always find a way to do so. I think our music speaks for itself and we’re fortunate that all ages like our style. When we were called Pachucos y la Princesa, there was a guy that loved metal. He used to come to our concerts and would say, “‘The only music I like is metal and Pachucos y la Princesa!” We were like “Why?” He responded with, “I don’t know, I just like it!”

Jenny, is there anything you would like to add?

Ball: If you’ve never heard our music before, come to the live show because it’s definitely different. We give it all and we have a blast. We’ll be playing at Pershing Square. I’ve been a fan of Ozomatli for years and I’m like, “Yes! We’re going to play with them!” We’re going to play our set before theirs. We’ll probably do an uptempo set for people looking to get their party on.

Jenny and The Mexicats’ music is readily available on all music platforms.