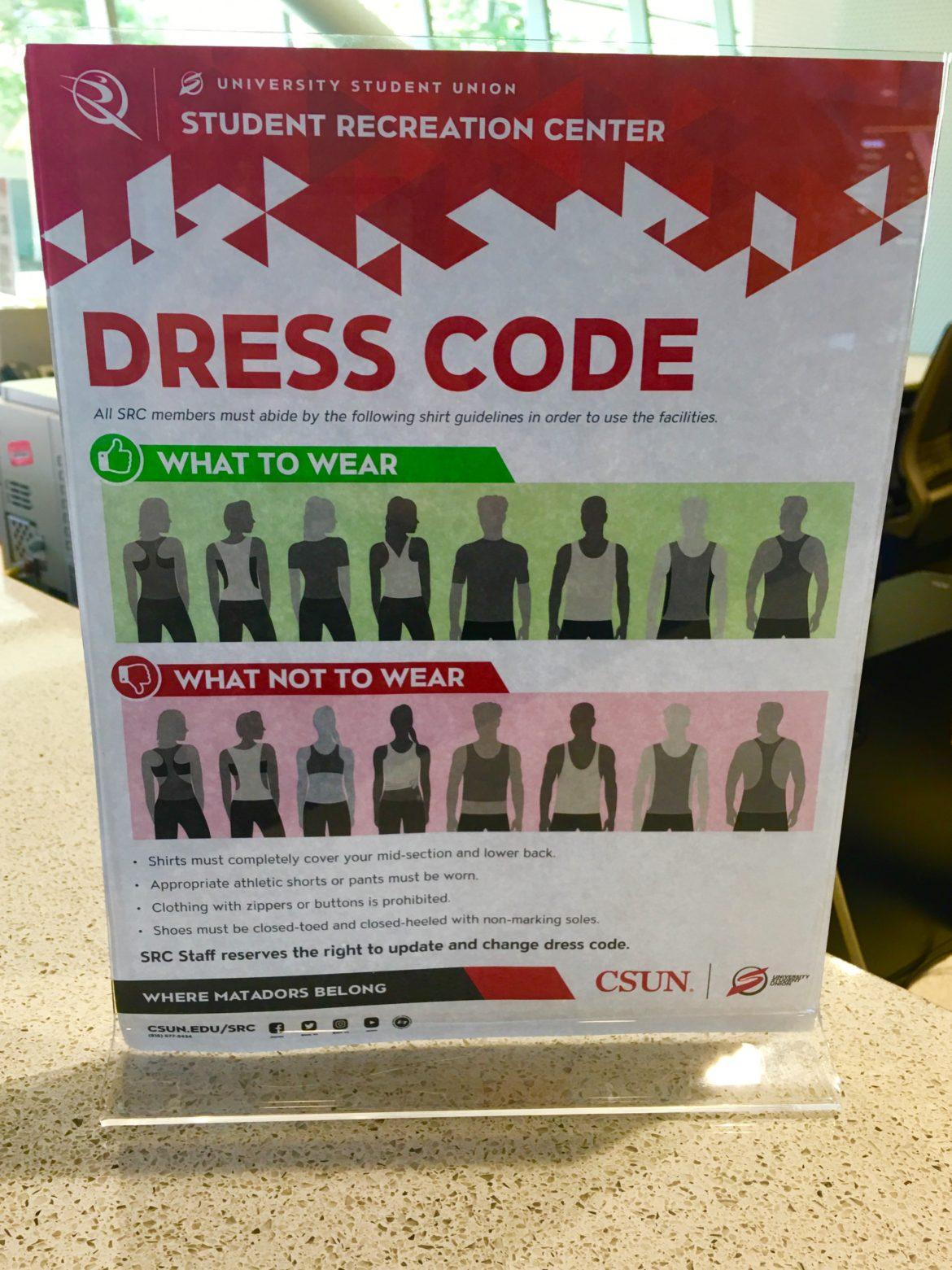 One of the The Student Recreation Center's new visual aids inside the center. Photo credit: Andrea Esparza

As college students, the days of following a dress code seem long gone. However, at the Student Recreation Center, this tradition still applies.

When entering through the front doors of the SRC, a range of signs and images are posted throughout the facility. On the front desk sits a poster displaying what kind of apparel is allowed in the facility. The guidelines target both men and women.

Each year these signs are done slightly differently, according to Associative Executive Director of the USU Jimmy Francis. This year’s design put an emphasis on visuals, hoping to present a clearer representation of the dress code enforced on both employees and members.

For instance, it shows that trendy athletic wear, such as women’s crop tops and men’s tank tops that are cut too low on the side or back, should not be worn.

Appropriate clothing, such as non-offensive shirts that cover the midsection, front, sides, and back as well as bottoms that cover the buttocks and pubic area, must be worn throughout the building. Clothes with zippers and/or buttons that may damage equipment are also prohibited.

Students who violate the dress code while inside the SRC are asked to leave or put on the appropriate clothing, which can also be purchased inside the center. However, the SRC is also willing to compromise if a valid reason is presented, Francis says.

The newly placed posters rekindled a fire of discussion about the code. While comfort is one’s main priority, there’s also a fight for the freedom of a student’s clothing choice which is limited due to this dress code.

Amber Ruelas, junior at CSUN, went to Twitter to express her frustration with the guidelines.

“When I first saw the dress code I was really upset because yes, we’re all adults,” Ruelas explained. “Not only that, we pay so much money towards this school and the SRC, and they feel they can dress code us? That’s not right.”

Various other students replied on Twitter with a similar level of aggravation.

When discussing this issue with Francis, he disclosed that the dress code was set in place primarily for sanitary reasons, to create a welcoming environment and to protect equipment.

“There are studies that show the amount of skin and the contact of the equipment can be problematic just in [terms of] the transmission of bodily fluids,” Francis said. “So the less skin you have in contact with the equipment, the better off we all are.”

The SRC dress code may seem strict to some, but it seems to be done with the intention of keeping the communal space sanitary, safe and welcoming. Future change in the dress code is possible as the SRC reserves the right to update and change the dress code at any time.

“We’re not trying to be the fun police, but we do have to set some standards so that we can continue to maintain a place where people want to come,” Francis concluded.