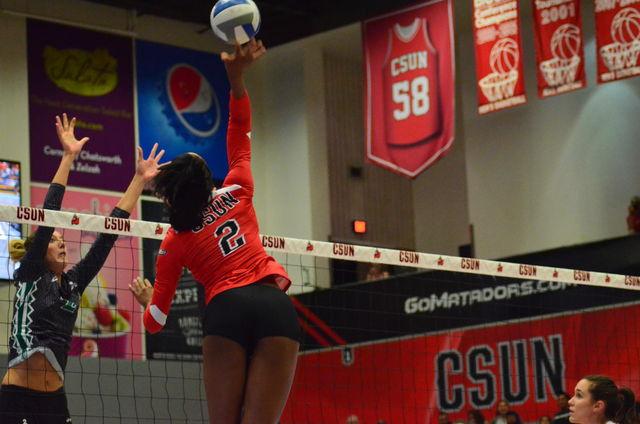 After an up and down start, the Matadors will return to CSUN for their home opener Friday Aug. 31 against North Texas at 6 p.m.

The team will also play Idaho in the Matadome Saturday night Sep. 1 followed by an away match Sunday Sep. 2 at Pepperdine.

The Matadors enter the CSUN-Pepperdine Challenge following a 1-2 start to the season.

The team suffered two tough losses against Utah State and an aggressive Arizona squad. CSUN picked up their lone win against Sacramento State in five sets between the losses.

“We’re still trying to [build on] the fact that we do have talented players that we can put in different places, but sometimes it takes [time] to find that right fit,” said Coach Jeff Stork.

The team’s identity as of now remains unknown. Personnel and rotation changes have kept the coaching staff busy while keeping every player ready for their moment on the court.

Some freshmen have been able to earn playing time on a roster weighed more by upperclassmen.

Stork and coach Susan Terrusa have been impressed by the play of freshmen like Lexi McLeod, Nicole Nevarez and Hannah Merjil.

“I thought our freshman played really well,” said Terrusa. “For their first collegiate match they all displayed great confidence and composure. Their futures are bright.”

McLeod and Nevarez are second and third on the team right now in kills. Merrill has been solid in the two setter rotation, averaging 6.08 assists per set and leads the team in aces with five.

Despite a shaky start, one thing the team is not lacking is a leader. Outside hitter Aeryn Owens had a career year in 2017. The senior enters her final run as a Matador with a clear mark made on the program.

Owens is now ranked ninth in kills for the program. If the captain simply reproduces her 2017 stats, she’ll end up in second.

Nonetheless this team still needs a little more production if they want to rise to the top of the Big West.

“We only have 12 kills per set on average,” said Stork.”We need to be at about 14 or 15 to start more winning matches, so we need two [or three] kills out of somebody.”