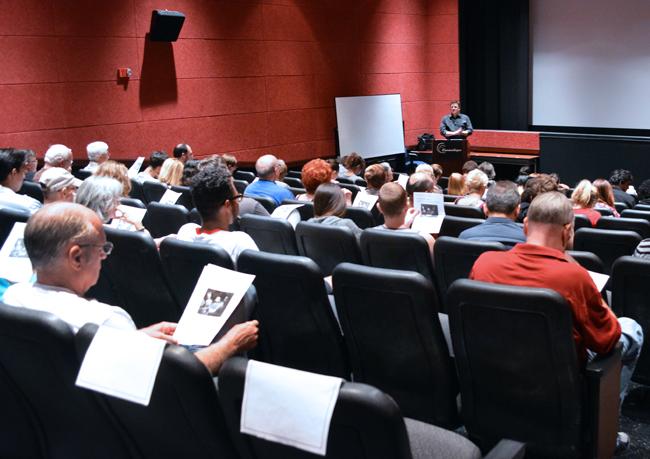 Tim Halloran introduces the film "A Canterbury Tale" inside the Armer Theater for a event called Cinematheque in an effort to bring back the classic films to a wider audience on Nov. 10, 2014. Photo Credit: Patricia Perdomo/ Contributor

The Cinema and Television Arts (CTVA) department received a generous donation of $60,000 from The Hollywood Foreign Press Association (HFPA) on Aug. 9 at their own annual grants banquet in an effort to support the university’s film students.

This is not the first time CSUN’s film department has received a large donation. Beginning in 1996, numerous monetary donations have been made to support the rising film programs at the university, according to CSUN Today.

“(In 2015,) (t)he HFPA (…) awarded the school a $2 million grant as an investment in the diverse voices of future filmmakers,” Carmen Ramos Chandler, a reporter for the PR department for CSUN Today, stated in a press release.

The $2 million grant that was spent last year was dedicated to “the west wing of Manzanita Hall to the HFPA,” according to CSUN Today.

“The HFPA gets who our students are, and respects the diverse voices those students are bringing to tables all across the entertainment industry,” Thomas said to the CSUN Today. “Their continual support helps to ensure the creative talents behind those voices have an opportunity to be heard.”

However, many film students are concerned with what the money will be spent on.

Many students in the impacted Cinema and Television Arts programs are unable to sign up for the classes they want due to the lack of open classes, most of which fill up before the students’ individual registration dates.

One such student is senior Jennifer Kukucka, a multimedia production major. She calls for this money to be used to allow CSUN offer a larger offering of core classes in the majors across the department.

“I have had numerous GE classes, requirements to take within CTVA, result in me getting pushed back a semester because so many classes are impacted,” Kukucka said. “Sections fill up before people even have the chance to register, and then they’re left with added time on their four, five and six-year degrees. Plus, the classes are set up in such a way that you can’t take other courses until you complete the one you can’t get into.”

Kukucka believes a solution is closer to reality.

“This donation could easily help each and every CTVA student by creating a more organized schedule of classes to ensure that there are enough spaces available in the core GE subjects.”

But Kukucka also shared her difficulties of working at the Armer Theater in Manzanita Hall, the 130-seat free movie theater, presenting classic films for students.

“(Working) at the Armer Theater in Manzanita Hall,” Kukucka said, “with monetary restrictions cutting hours and staff, it’s been tough on our crew to get through our shifts as we’re supposed to, diligently and on time. It can affect classes or events held in the theater, and it creates conflict when tensions are already high.”

She believes the donation could help the theater in getting hours back to staff, so they can continue to provide this service to students outside of class time spent inside the theater.

“It not only benefits us working to have things run smoother,” she commented, “but it also takes added stress off of faculty and students that are just there to enjoy their class.”

Most of the money has instead gone to upgrading to the latest technology. The top two improvements to the program were the Hollywood Foreign Press Association Senior Film Edit Suite and a state-of-the-art sound mix facility.

No one denies that this donation will benefit the program. However, the department has repeatedly spent the donation money to upgrade already industry standard equipment instead of creating more opportunities for students to make films by opening more class sections and obtaining more equipment.

There aren’t enough classes offered for the program. This deficiency of open CTVA courses that fulfill core requirements — some of which only gives one or two options per semester — is in large part, unintentionally, to numerous lists put out by The Hollywood Reporter and Variety, marking CSUN as the 22nd best film school in the United States.

Francisco Fernandez, a screenwriting student, has struggled to take the courses he needs to graduate.

“I would have been a senior this semester,” Fernandez said. “But because I am waitlisted for two classes, I’m going have to be a junior again, and that sucks because it happened in the spring and again in the fall.”

This decision forces Fernandez to look at other options, perhaps minoring in business management.

Although other students feel the funds to help finance their short films. Daniel Greenberg, a 50mm Film Club member and film student, finds its difficult for students to afford the high costs themselves.

“The donation could be used for film shoot permits for bigger/final projects,” Greenberg said. “Permitting (locations) is a regular problem for me when it comes to shooting.”

There are around “1,550 undergraduate students and 30 graduate screenwriting students,” and even with additional donations, the program remains to be expanded to meet students’ needs, according to CSUN Today.