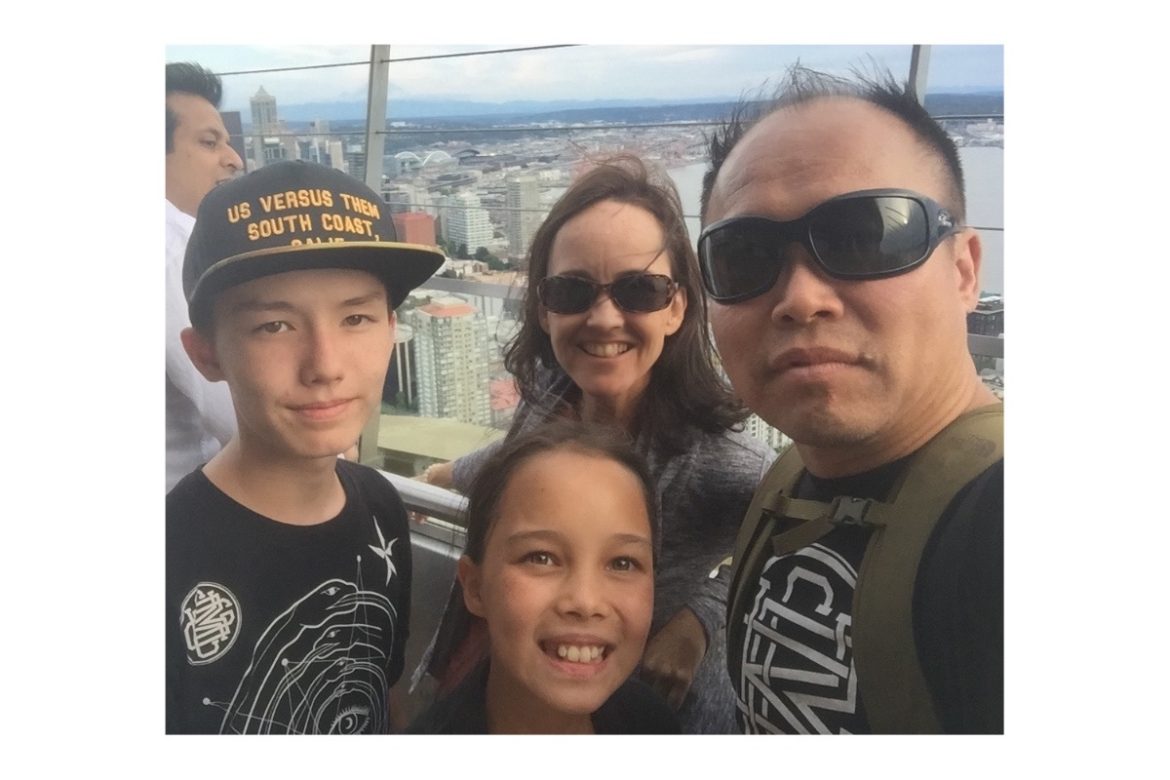 Jung Hong is with his wife and children. Photo Credit: Jung Hong

Though Hong had been battling cancer for the past year, the knowledge of this was kept between loved ones and his close family, including his ex-wife Stacey and two children Ethan and Maya, ages 12 and 14.

The news of his passing broke on the GoFundMe page he had created on Jan. 9 to finance his surgery. The funds received from 338 people surpassed its expressed goal of $30,000 by $3,765 over an eight-month period.

He taught two graphic design courses last spring, including ART 243, Introduction to Typography, and ART 444 Graphic Design III, alongside co-owning his own business Axis of Evil Design, exploring ways to push the medium of art through a polished brand identity.

Students will remember him as an accomplished designer. Some of his many achievements include being a freelancer at Smullen Design, an art director at Vans shoes, a creative director at Innerspin Advertising and a designer at Hamagami Carroll Associates.

Setting an example for what was expected to succeed in an extremely competitive industry, his work ethic was inspiring to others. His work was both published and has received praise among critics.

However, one of his students, Joseph Krieger, 21, a graphic design major, who had him for a typography class during his sophomore year, said he was shock upon hearing about his passing.

Hong held many strong beliefs in the field of graphic design.

“He was a very outspoken graphic designer,” Krieger said. “He was one of the first professors that introduced … (that) we shouldn’t just be working for somebody, you should be … creative. And essentially, everything we practiced in school should carry that idea.”

Krieger recalled his first lecture with him, where Hong laid out the difficulties of working in a creative medium.

“This is something that is going to take a lot of work, and a lot of people are not going to be successful,” Krieger said.

In fact, Krieger labeled Hong as one of the hardest professors he ever had taken at CSUN, as Hong expected students to work diligently at a professional level.

Before he died, many of his students sung their praises for his teaching.

Alan Galura was one of those students who commented on the GoFundMe page before his passing..

Galura got kicked out of CSUN, around 2004, due to bad grades and financial difficulties, but he was fortunate enough to take Hong’s Introduction to Design course before leaving.

“(He) said (he) rarely handed out 11 (out of) 10 scores. I made it my goal and worked so damn hard on my final project and got that 11,” Galura commented. “What I learned from (him) became the foundation to my self-teachings as a designer.”

That hard work, those trials to bring his work worthy of an 11, paid off.

“(Fifteen) years later, I can proudly say I’ve always worked as a designer since I left (his) class, and (he was) instrumental to making that happen,” Galura commented. “The final project is still on display in my living room as well as notes on graphic design and visual communication, which I often refer to, even though I transitioned to (user-interface) design.”

On the GoFundMe page, Tiffany Henschel, another former student of Hong’s, shared a moment in his class when a student complained of his inability to find ideas, not wishing to copy anyone else’s.

“I mean, you get inspiration from everywhere,” said Henschel. “You don’t just come up with a thought out of nowhere. You don’t create something from nothing. It’s not like you’re God.”

Hong lived by a very disciplined philosophy that aided in students’ success and their retention in the field of design.