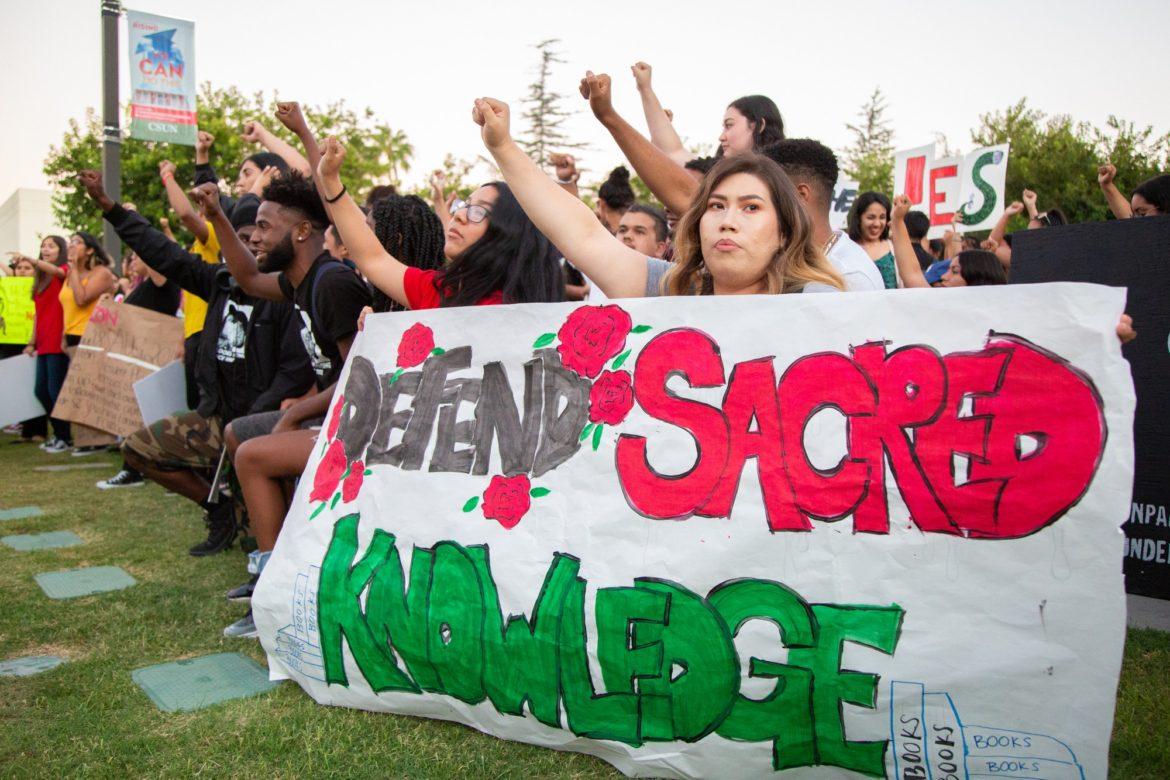 Students protest against the implementation of Executive Order 1100 at the Student Convocation 2018. Photo credit: Roberto Cisneros

Students and faculty protest against the long-debated implementation of Executive Order 1100 during Student Convocation 2018.

Christian Valenzuela, 23, a Chicano and Chicana studies major, was among the first to protest. When he first heard the news of the university getting rid of that requirement and possibly the classes as a whole, he went to protest and voiced his message and the struggles they faced in CSUN’s history.

“We can make a change,” Valenzuela said. “Our ethnic studies department building was fought for in the sixties. The Chicano house got burned down by white supremacists, and we are still standing here strong. We aren’t going to give up. We will always stand up for ethnic and gender… studies.”

Mayra Perez, 19, a political science and Chicano and Chicana studies major, said that it feels like their voice on campus is be diminish.

“I started talking to some of the leaders, and I even brought my brother (Abdiel) who is a sophomore in high school,” Perez said. “(Abdiel) came here because he will be here one day, too. This is impacting us because, in high school, we are never taught the brown, dark and indigenous side of history, and if they take away this section, we won’t be aware of what is going around us. We need that type of education, not only at CSUN but at every campus, so we all know our history.”

Executive Vice Chancellor Dr. Loren J. Blanchard addressed the concerns in an email sent to President Dr. Dianne F. Harrison, Sept. 11, stating that CSUN was granted an extension until fall 2019 for full implementation and allowed an exception for the maintenance of the six-unit CSUN requirement in Area F.

However, there is one large caveat to this.

“No further extensions beyond fall 2019 will be granted for (the) full implementation of EO-1100-Revised,” said Blanchard in the email.

Editor’s note 9/19/18: In the article, a student was quoted to have claimed to have made several attempts in reaching out to President Harrison but she was never available. The Sundial has received information that the student’s claim was not true.