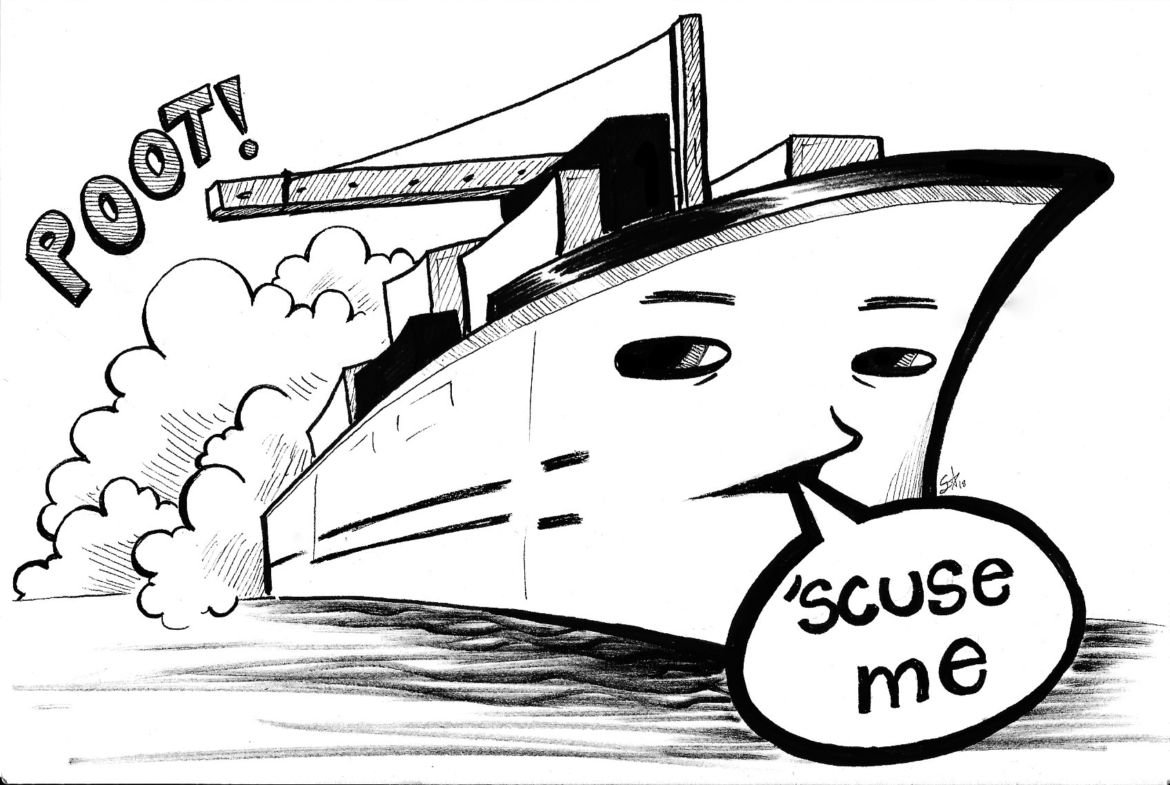 While most of the focus on climate change in the transportation sector is on land-based modes and land usage with a small amount in air-based modes, the real super polluters are in the ocean right off the shore’s horizon.

Ships burn bunker fuel, and according to Derrick Penner of the Vancouver Sun, “Deepsea cargo ships typically burn the heavy, residual oil left over after gasoline, diesel and other light hydrocarbons are extracted from crude oil during the refining process.”

Given its leftovers, oil refineries are eager to sell it to the lowest bidders and are dirt-cheap as a result, with shipping companies as the biggest customers. According to the International Chamber of Shipping, the international shipping industry is responsible for the carriage of around 90 percent of world trade.

This cheap bunker fuel paired with slave labor wages is why the prices of goods and resources made and/or extracted abroad are so cheap, or rather, too cheap.

Bunker fuel is so dirty that most of North America, including California, and Europe have banned burning it within waters under their direct control.

I have a cousin who even did these inspections for honoring California’s bunker fuel ban on every ship docked in port for several years. In terms of pollution, he called bunker fuel without hesitation “Liquid Coal.”

Much like coal, bunker fuel is actually solid at room temperature. When it burns, it literally vomits out with force astronomical amounts of greenhouse gases and too many other extremely toxic pollutants to count. This makes up most of their fuel tanks.

According to NOAA, these ship fuel tanks can hold up to about 4.5 million gallons.”

To make matters worse, the engines that usually power these mega ships are of the most polluting combination of two stroke and diesel. Former Marine Engineering Officer Anish Wankhede explains, that a two stroke engine can burn low grade fuel oil and hence reduce running cost of the ship.”

In 2009, a study found that it took only 16 bunker fuel burning ships to make as much pollution as all the combustion powered cars, trucks, buses and trains in the world combined, while being exempted from the 2015 Paris Climate Agreements from day one.

With this exemption, it is up to the International Maritime Organization to ban the use of bunker fuel in ships as fast as possible to reduce shipping’s emission footprints, and it is not looking promising that bunker fuel will be banned anytime soon when it is stacked with shipping industry interests.

With a still increasing global population, shipping looks set to expand and make even more emissions than already.

So now that all of us on land have our own climate change efforts cut out even more than before, honoring climate agreements and cleaning up land power generation, mining and land-based transportation is still not going to cut it. The only way we are going to make any long-term progress is by reducing our consumption and thereby, our trade.

“We’re still going in the wrong direction on climate change,” said Mark Watts, who was the executive director for the group that made the study. “Using more renewable energy and mass transit won’t be enough to reverse this. We have to reduce our consumption.”

The simplest way to reduce our consumption and trade is by buying less, in addition to using it until it runs out while researching hard to buy local and made in the U.S. products to avoid shipping’s extreme emissions. Not only do we have things made in the US, it also has to be made by labor making a living wage.

One of the things the CSUN community should be pushing for has to be that CSUN-themed goods should be made in the U.S., because currently most of them are not.

This need to reduce trade is an existential dilemma for cities worldwide, as trade is at the core of what led to the creation of cities starting with agricultural surpluses 10,000 years ago, and have allowed them to keep growing ever since.

Unless we get the courage to challenge shipping, double down on our efforts on land and air, and ultimately pull the plug on our current mass extraction, production, and consumption based global economy, we are all sunk on climate change.