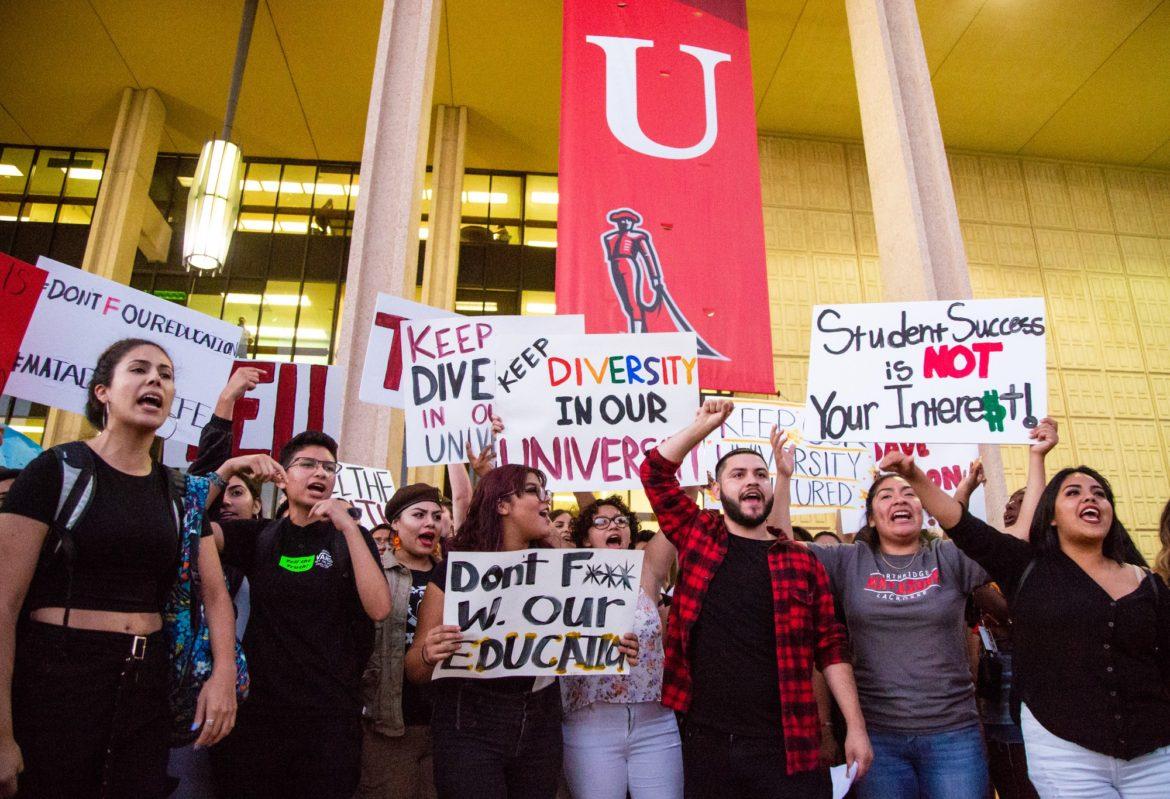 Students protest against the implementation of Executive Order 1100 at the Student Convocation 2018 on Thursday. Photo credit: Roberto Cisneros

Students and faculty protested against the perceived elimination of Section F and the courses therein through the implementation of Executive Order 1100-R, during New Student Convocation 2018 on Thursday, Sept. 13.

Students and faculty remained unconvinced of the university’s new stance. Even Interim Provost Stella Theodoulou issued a statement on the official university website on Sept. 12 in addition to providing a link to a message sent out the day prior from Executive Vice Chancellor Loren Blanchard.

CSUN is the only CSU that requires Section F, and protesters alongside others were concerned whether the university had any control in keeping the requirement and the courses contained within.

Many protesters voiced concern of President Harrison not being clear with them in what changes would be made to Section F.

Charlie Facio, 21, double majoring in sociology and Chicano/a Studies, was one of those voices.

President Harrison disagrees, as she told The Sundial.

“As the Faculty Senate begins their work to implement the remaining aspects of EO 1100-R, more communication will be needed so that the entire campus community remains informed.”

President Harrison explained that a reason for the confusion was because the new Executive Order would require students to take more science courses to graduate, thereby causing many protesters to believe those Comparative Cross-Culture Studies courses would be largely replaced by ones in science to satisfy the new course requirement.

The additional science courses are not meant to replace the ethnic studies courses.

Current students will not be affected by this and will be able to continue with their current GE plan.

In an effort to not extend students’ time to graduate, the university will now provide unlimited “double-counting” in all majors without exception. President Harrison said. The units of any GE course from their major will also be counted in an appropriate section.

The concerns the protestors brought up led to the protest carried out on Thursday, which targeted the New Student Convocation 2018 in an effort to get President Harrison, as one of the slogans protesters were chanting goes, to “tell the truth.”

The event hoped to connect what students will learn in and out of the classroom by focusing on themes drawn from the Freshman Common Reading selection.

This year the Freshman Common Reading Selection Committee chose Author Amy Ellis Nutt’s book “Becoming Nicole: The Transformation of an American Family” to spark conversation of how students can stand up and fight against the persecution of the transgender community. Based on a true story, the author captures the struggles faced by a transgender girl, Nicole Maines, being accepted by her family.

Both Nicole and her father, Wayne Maines, served as the keynote speakers for this year’s event.

The majority of the protest took place during New Student Convocation 2018 itself as they shouted to drown out the speakers’ messages.

“I saw people shouting and running around, so I went to a freshman,” Mann said. “I (asked) him what are those people protesting about. He says, ‘I am not so sure, but they were being rude the entire time.'”

This was most evident in the moments following the continued yelling of “tell the truth” by the protesters during the event that led to one of the keynote speakers, Wayne, pleading with the protesters to stop.

He was then cut off by a female protester who felt as though Wayne was talking down to them, shouting: “We’re not your children!”

Other protesters joined in saying “we’re not children” and “there’s no children here.” And after continuing speaking a few more words of his speech, another female protester shouted: “Children are our future!”

This last comment was followed by cheering and clapping, making it hard for Wayne to be heard, followed by shouts of: “Who are you again?” and “Who cares?”

Wayne started up his speech again, talking about his daughter Nicole playing the lead, Dr. Frank-N-Furter, in a college production of “The Rocky Horror Picture Show,” and asking if he could come, to which she told him that it would be too sexually explicit for his taste.

This was only followed by a protest led by Facio, shouting: “Students’ success is not your interest!”

“If there’s anybody in her community that had a reason to protest…” Wayne started to say, to which the protesters proclaimed variations of “And we don’t?” followed by another protest led by Facio, shouting: “Whose right? Our right… Queer studies is under attack!”

President Harrison had this to say about their actions:

“Freedom of expression is a bedrock value in our country and on our campus. As we move forward with the implementation of EO 1100-R, the Provost and I will continue to listen to the concerns of our students and faculty. Even when we disagree, I will continue to support the right of all members of the campus community to express their thoughts and beliefs on issues of importance.”

President Harrison has yet to speak publicly outside of this request made by The Sundial.

Editor’s note 9/19/18: The Sundial added an article stating that four selected departments will be allowed unlimited double counting but it should had stated that all departments would be allowed to.