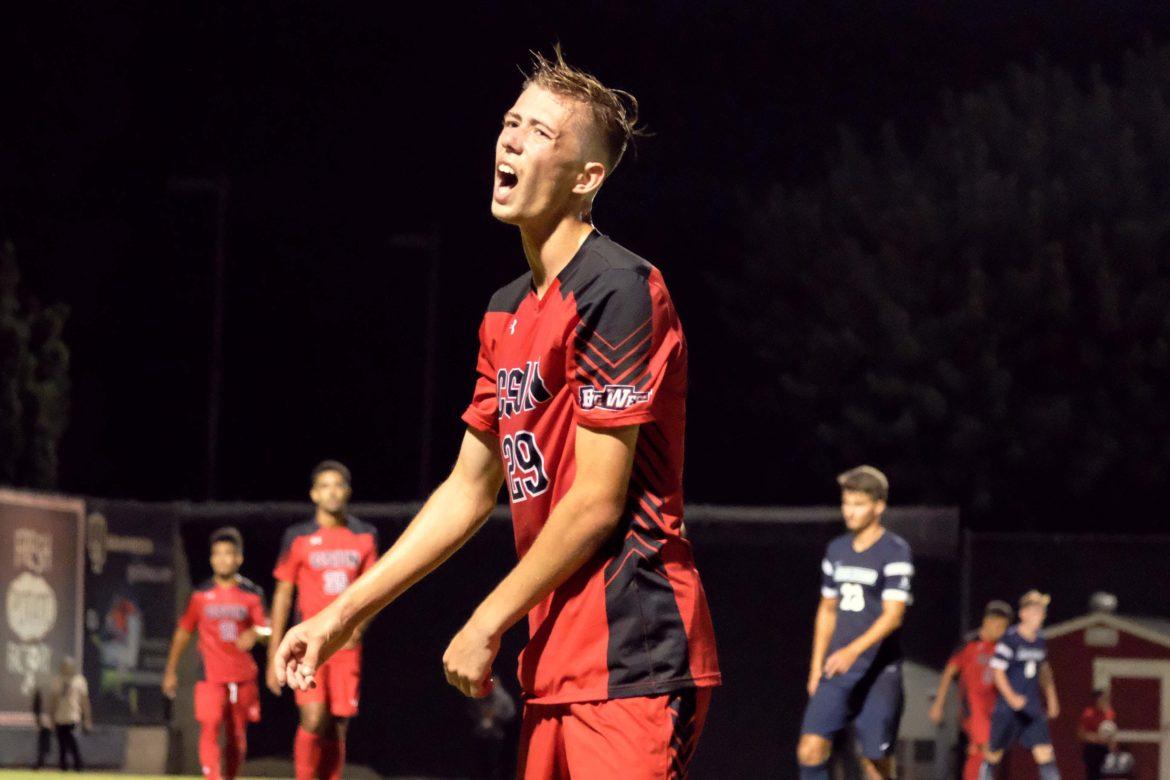 Wolfgang Prentice, #29, getting frustrated after losing possession of a ball from a simple pass near the end of the second half vs San Diego on Sunday. Photo credit: Jose Morales

CSUN was shut out for the first time this year after losing at home to the University of San Diego 1-0.

The loss comes just three days after losing 2-1 on the road at Loyola Marymount, marking the team’s first losing streak of the season.

CSUN started the week off on a high note after getting a national ranking of 13 from Top Drawer Soccer, but it would all go downhill from there.

The team played at LMU on Thursday, Sept. 20, and lost 2-1 despite getting more corner kicks and shots on goal. Daniel Trejo scored his sixth goal of the year after 85 minutes, his third straight game with a goal, to give the Matadors some hope at the end, but it was not enough.

On Sunday, the University of San Diego visited Northridge and held out for the shut-out win.

Again, the Matadors had more shots on goal but were not able to finish plays off as they were held without a goal for the first time this season.

“We didn’t take our chances,” Head Coach Terry Davila said. “Those who do not score watch the other team score.”

The best shot of the night came after 77 minutes from senior forward Nicholas Grinde. The game was still scoreless when Grinde found himself in a good spot in the box but his shot hit off the right post and out to safety.

The Toreros scored the golden goal after 81 minutes through Matthew Berry, who was left alone on the right side of the box and hit it past a diving Henrik Regitnig into the bottom left corner of the goal.

Davila was not pleased after the game and could not find any positives, lamenting the amount of missed chances from both games this past week. The Matadors had 32 shots over the two games but were only able to convert one.

Trejo was the biggest culprit, scoring only one of his 11 shots against LMU and San Diego, while Johnny Rodriguez was only able to get six shots off over the two game stretch.

The Matadors will have the next week off as they prepare for Big West Conference play to start. Their opener will be Wednesday, Oct. 3 at 7 p.m. at Cal State Fullerton. The team then returns home to play No. 17 UC Davis on Sunday, Oct. 6 at 7 p.m.