Councilwomen turn out to speak at new Oviatt Library Exhibition 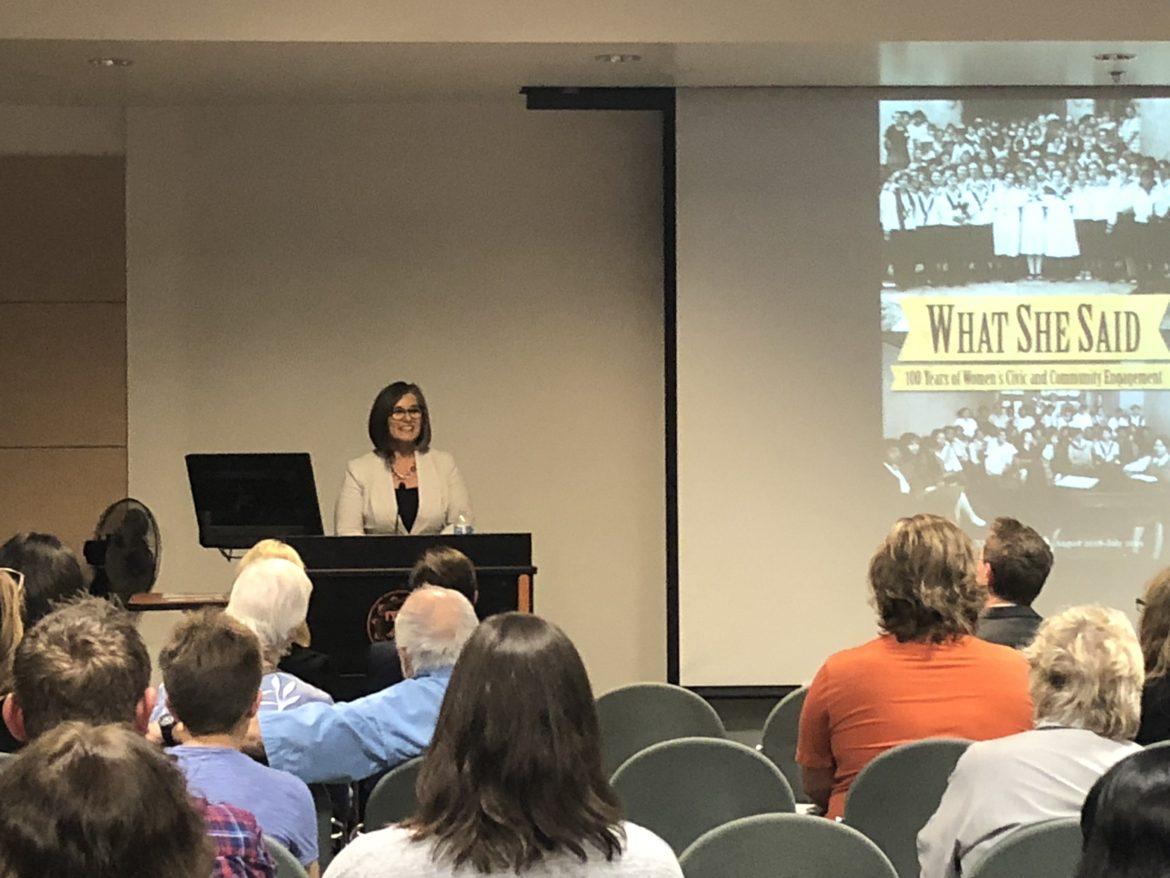 Monica Rodriguez tells the audience that everyone has a role to play in the community. Photo credit: Zack Rome

The Oviatt Library hosted and presented an exhibit called “What She Said: 100 years of Women’s Civic and Community Engagement” where two active councilwomen spoke to a packed house at the Jack & Florence Ferman Presentation Room, Thursday, just after 4 p.m.

Mark Stover, the dean of the Oviatt Library, hosted and kicked off the event by honoring a few members who were the pioneers of the women’s studies department at CSUN. He gave the microphone to CSUN President Dianne F. Harrison, who shared that CSUN has had women leaders at the forefront of the university for the last 26 years.

“While today’s reception and the exhibit celebrated 100 years of civic involvement, we should not forget that women in our history in politics and civic engagement go back much further than that,” President Harrison said.

President Harrison ended her remarks with a quote from Hillary Clinton about how democracy only works if all citizens, including women, are able to participate fully in our country.

Martinez, a CSUN alumna, began her speech by recalling when she was a member on campus before going into important issues such as sexual harassment in the workplace, human trafficking and lack of representation of women on the city council.

“We don’t have the luxury to rely on leaders,” said Martinez during her remarks. “It is up to us as women to be our own heroes, to stand up, get elected and do more than just get out and vote.”

Martinez went on to recall her history of living in the San Fernando Valley and her struggles about living in a family of immigrants who had no idea of United States politics, but that didn’t stop her from pursuing her dream.

“There was always a sense that we needed to do right by our neighbors, kids and be positive role models for our neighborhoods,” Martinez said.

Martinez then handed off the presentation to another speaker and congresswoman, Monica Rodriguez, a City of Los Angeles councilwoman for the 7th District. Rodriguez stressed the importance of student involvement and knocking on doors in communities rather than just going to march or tweeting something.

“Not all of us are cut out for this role of public service, but there is a role for each of us to play in this community,” said Rodriguez. “There is a role that you can have to help elect more women and to inspire them to do whatever they want to do.”

Joy Picus, the very first woman to represent the San Fernando Valley on the Los Angeles City council back in 1977, was also in attendance. She expressed that she couldn’t have been happier with the speakers.

“I was so impressed with Nury and Monica to see the new generation so strong and so powerful,” Picus said. “CSUN is a dynamic institution, so I’m glad to see an event where the San Fernando Valley is celebrating women.”

The event ended after the two speakers engaged in an open questions forum, and was followed by a reception and exhibit viewing in the second floor of the library.