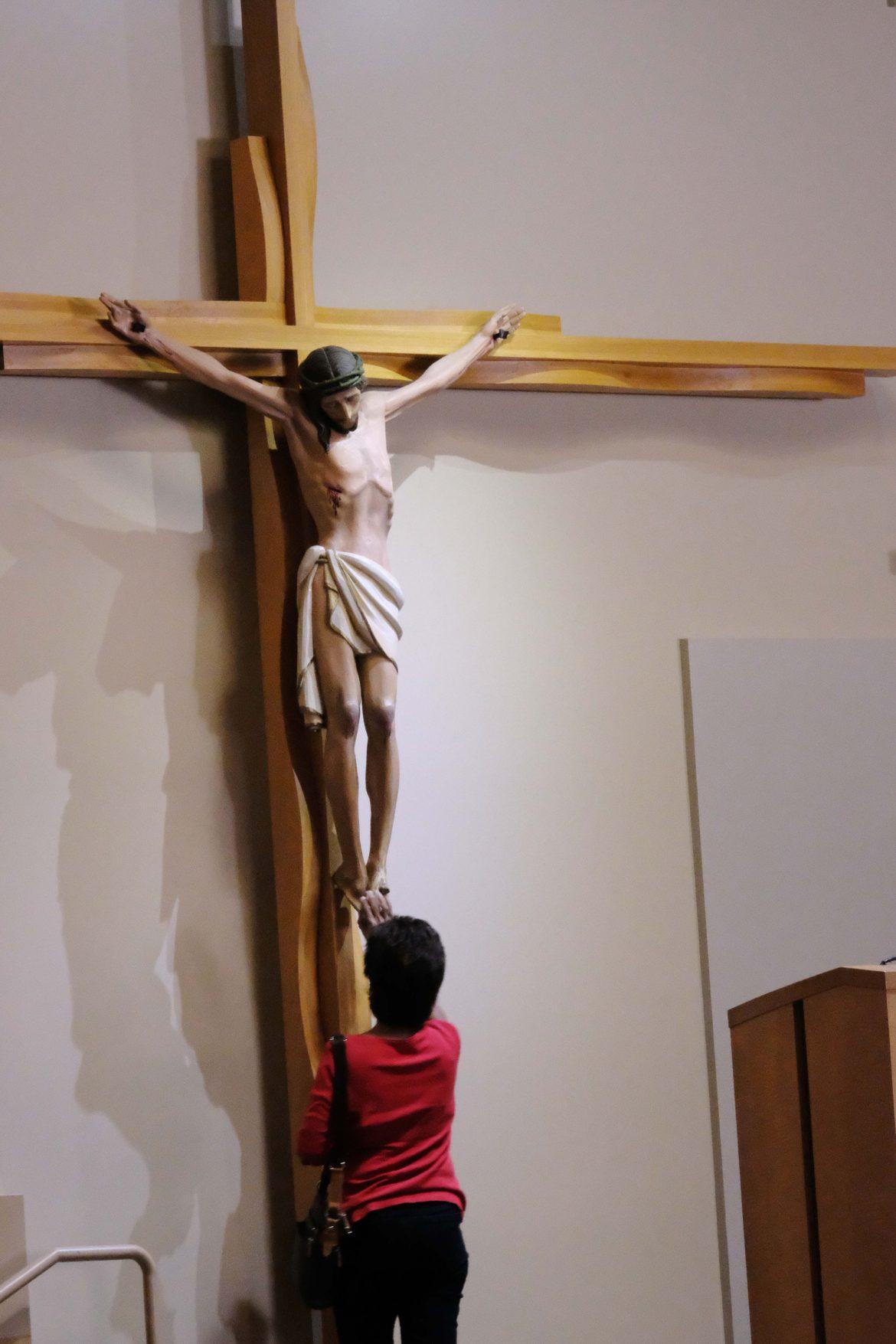 Church member touches the feet of the cross at Our Lady of Lourdes Church, in Northridge. Photo credit: Jose Morales

Former Roman Catholic priest and middle school dean was arrested for allegedly sending nude photos to an account operated by the police department on Aug. 23.

Charles Patrick Mayer, formerly from of Our Lady of Lourdes Parish in Northridge between 1996 to 2000, was arrested in Banning Unified School District after police allegedly received nude photos of himself meant to be sent to a 14-year-old boy.

The arrest sparked conversations within the Catholic community both in Northridge and at CSUN about the alleged actions.

Esther Hatfield Miller, a former member of the Catholic Church and CSUN alumna, shared her claims of being a sexual abuse survivor of Deacon Michael Nocita.

“He had control over my mind and body and soul,” Miller said about Nocita.

Nocita would travel from Camarillo to Miller’s home in the valley to give her father conversion lessons.

Miller was largely silent for over 20 years until 2002 when she attended her first SNAP (Survivors Network of those Abused by Priests) meeting and told her story.

Now she volunteers her time as a mediator in hopes of helping others who have gone through similar experiences.

“I thought I can’t be the only one going through this,” Miller said.

Miller’s experience isn’t a mere one-off occurrence. Old reports have resurfaced as early as this month about sexual abuse within the Catholic Church.

A few fellow CSUN students and members of the on-campus Catholic Newman Club shared their thoughts on the controversy surrounding the Catholic Church.

Paul Lacson, a sophomore majoring in mechanical engineering, said that his first reaction to hearing about the sexual abuse within the Catholic Church is anger and disappointment.

“Where did we drop the ball and how can we move forward?” Lacson said.

The mistakes made in the Church by those with authority had made the community look bad, said Adriana Covarrubias, a senior majoring in child development.

“For people who love the Church so much and for the people of authority that are making these mistakes, it makes us as a whole look bad,” Covarrubias said. “It’s the same as if a family member did something bad, they mean a lot to you; you still love them.”

Conflicting feelings of holding onto one’s faith when horrific accusations are being brought to light is something people within the Catholic Church often grapple with.

“I converted to Judaism,” Miller said. “If that (abuse) hadn’t happened to me, I would have still been a Catholic.”

Covarrubias said that the accusations do not hinder her faith.

“I feel like the faith is one thing, and the people a part of it are another thing,” said Covarrubias.

Miller said she believes that the Pope holds the highest authority to condemn and implement changes in response to these allegations and confirmed cases of abuse within its community.

“The Pope can do something,” Miller said. “Penning a letter is one thing, but taking bold concrete actions … (is) what victims need. It’s so vitally important we pay attention to these souls. These are wounded souls. They’re very gentle and tender.”