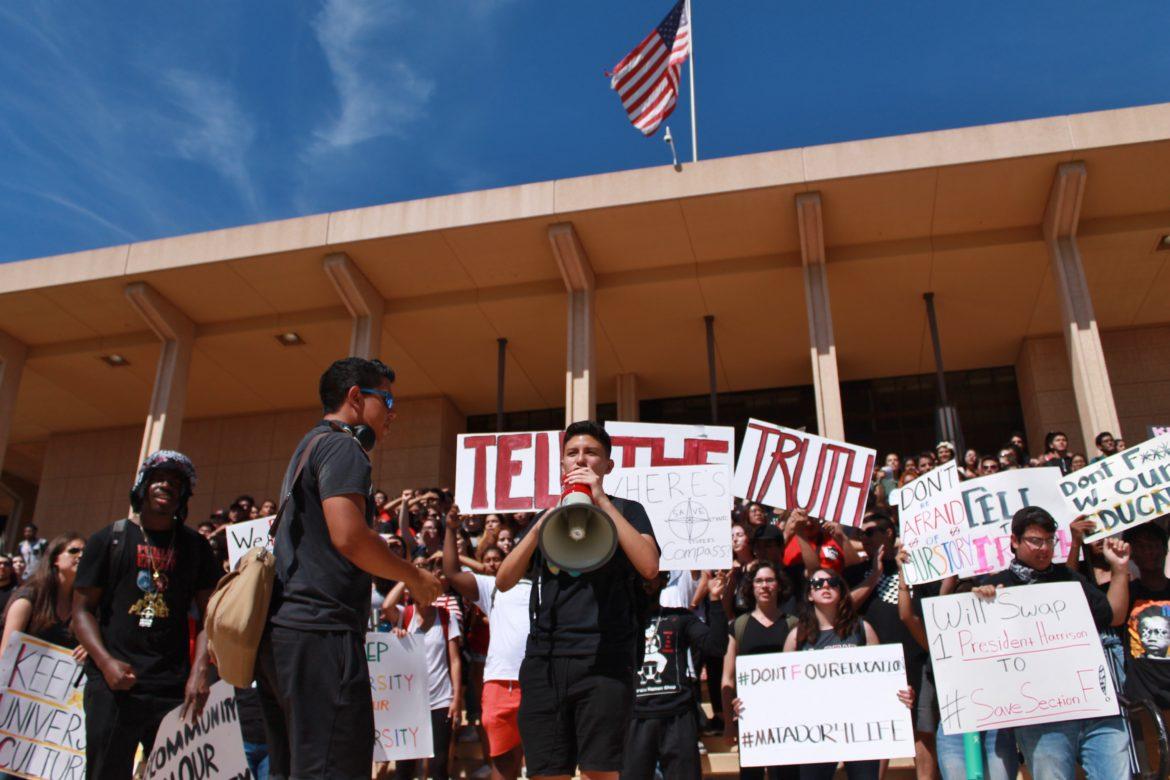 Students and faculty gather together on the steps of the Oviatt Library to protest Executive Order 1100-R and demand resignation of CSUN's President and Faculty Senate President on Thursday, Sept. 27. Photo credit: Clare Calzada

An estimated 200 students marched Thursday into the Faculty Senate meeting to protest against the implementation of Executive Order 1110 (EO 1110) and Executive Order 1100-Revised (EO 1100-R), as well as the alleged racist remarks made by Faculty Senate President Mary-Pat Stein. The student protesters and faculty also demanded the resignation of Stein, CSUN President Dianne Harrison and CSU Chancellor Timothy P. White.

Students and protesters walked out of their classes between noon and 12:30 p.m., and banded together in front of Bayramian Hall chanting “This is what diversity looks like” before moving to University Hall, where several students and staff gave testimonies.

“It is these courses our system hates because it teaches us to resist,” said Harvey of cross cultural studies classes under the Section F requirement.

She stresses the interdisciplinary value of queer studies, gender studies and ethnic studies, stating, “What we are fighting there isn’t just for ourselves, it is for those who come after us and for the people who are right beside you.”

“I’m here to hear what the students have to say … to listen to them directly,” said Watkins.

The Northridge Center room was packed with students and staff as the Faculty Senate meeting commenced. Stein’s introduction to the podium was met with a barrage of boos. In a College of Humanities open forum meeting on Sept. 24, Stein allegedly made the remark to Gabriel Gutiérrez, professor and Department Chair of Chicana/o Studies, that he should speak “proper English.”

Breny Mendoza, chair of gender and women studies, spoke in the meeting, asking Stein to step down from her position.

“Anyone that holds us with such contempt is unfit to represent us,” said Mendoza.

These messages addressed the need for change in the Faculty Senate’s processes, dissatisfaction of the communication between administration, and the campus community of students and faculty, as well as the alleged undermined efforts of the task force created by Harrison to make recommendations for the implementation of EO 1100-R.

Beatriz Cortez, professor of Central American studies, was one of those speakers.

“We need to have autonomy, we need to be able to conduct our own studies and our own research on our own terms,” said Cortez, who also declared her desire for a more democratic process.

In a statement released by Harrison to The Sundial, she stated:

“I regret that the implementation of CSU Executive Order 1100-Revised continues to produce distress among some members of our campus community.”

Harrison goes on to acknowledge the importance of the queer, gender and women’s, ethnic and cultural studies departments and the benefits of their work to the campus.

The president stated she was not invited to speak at the Faculty Senate meeting due to its abbreviated agenda, but that she has been informed of the concerns voiced at the meeting by Interim Provost Stella Theodoulou and Vice President for Student Affairs William Watkins.

In direct response to these concerns, as relayed through Theodoulou and Watkins, Harrison has made the decision to “include Timothy P. White in that conversation with faculty and students” and is in the process of organizing to meet with him next week.