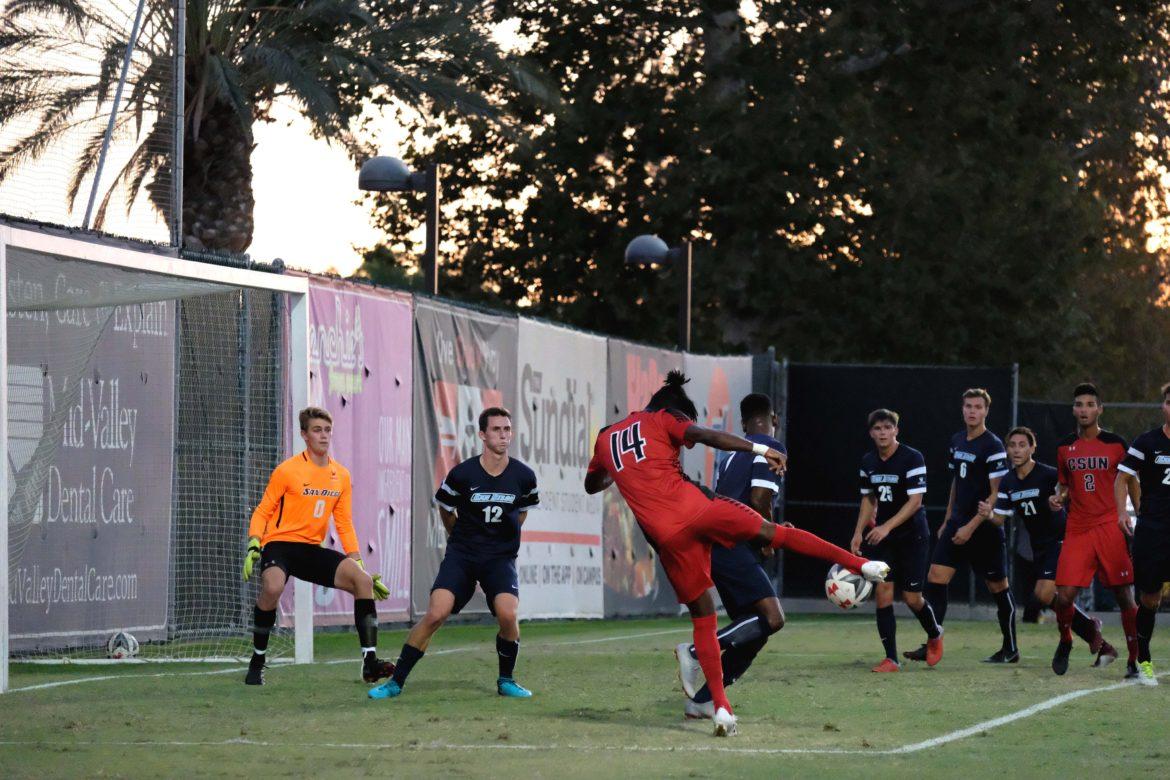 Nicholas Grinde getting a shot on target that gets blocks by the goalie during the first half of CSUN's game vs San Diego on Sunday 9/23/18 Photo credit: Jose Morales

The men’s soccer team begins Big West Conference play this week and the Matadors are “super confident” about winning it all this year, according to senior captain Andrew Rizeq.

“I’d say we’re pretty confident about winning,” said Rizeq. “I mean, we proved it in the preseason. We beat top ranked teams like Cornell, UCLA, New Mexico. I think our chemistry is great and I’m super confident about (winning).”

If this team is set on winning their conference, they will need to recapture the form they showed when they beat No.17 Cornell and No.11 UCLA over a three-day period in the middle of September. Those two victories catapulted the Matadors up the national rankings, with Top Drawer Soccer placing them at No. 13 in their Top 25 poll for the week of Sept. 21.

Reality quickly settled in, though, as the team dropped their next two games against Loyola Marymount and the University of San Diego, failing to score for the first time this year in the latter game.

“Yeah, we will,” Rizeq said about the team showing that they are still the same team that beat Cornell and UCLA.

After the back-to-back losses, the Matadors enter conference play with a 6-4-0 (3-1 at home) record. The team has scored 18 goals and allowed only 12 in their 10 games so far, with sophomore forward Daniel Trejo leading the team with 16 points, six goals and four assists.

Trejo, who burst on to the scene last year as a true freshman, had himself a day to remember on Sept. 2, recording the first CSUN hat trick in three years to lead his team to a 6-1 annihilation of Utah Valley.

This year, the freshman everyone is talking about is Wolfgang Prentice. Thus far, the winger out of Redondo Beach, CA has started every game, scoring four goals to go with two assists while constantly terrorizing opponents on both the right and left side of the attack.

“I’m excited,” Prentice said about playing the Big West for the first time. “I’m always excited for the opportunities that I get. It’s a lot to expect from a freshman to come out and start in a lot of the games and to even score.”

Prentice has been a key part of the Matadors’ success this season, with his five goals good for second-best on the team. One of those goals drew them level in the game against UCLA before they eventually won it through a goal from Trejo.

Unfortunately, CSUN will be without their other breakout star, redshirt freshman Khalid Hunter, who went off injured in the loss at Washington and has been ruled out for the rest of the season. The team will have to make up for his goalscoring prowess as he scored in each of the first four games to start the year, including two game winners.

CSUN starts off the Big West slate with a game at Cal State Fullerton, and should they get the win, it would be a historic one for CSUN Head Coach Terry Davila. He is currently at 191 wins, one behind the record held by his former coach Marwan Assad.

Rizeq and Prentice lavished their coach with praise amid his quest for the school record, with Rizeq talking about how Davila “always brings the level super high” at practice.

“Every practice he pushes us to our limits to make us better in every aspect on and off the field,” Prentice said about Davila. “I think he’s a great coach.”

Davila himself was coy about the idea of possibly taking the record from his former coach, though he did admit that he “never imagined” something like this after coming to CSUN as a child as his father coached multiple teams throughout the 1970s and 1980s.

Rizeq is also someone on this team that has something else to look forward to when conference play starts. A kinesiology major, Rizeq is set to graduate in the spring, making these his last few games before hanging up the Matador cleats.

“To be honest, it hasn’t really hit me,” Rizeq said about finishing up his college career. “It went by super fast but I’m just taking it day by day and I still want to improve to be better. All I want to do is win. Last season, no matter what, I just want to win.”

Rizeq and the Matadors will be hoping to get back to winning ways when they kick off conference play on the road against Cal State Fullerton on Wednesday Oct. 3 at 7 p.m. before returning home against No. 17 UC Davis on Saturday, Oct. 6 at 7 p.m.

The Matadors will be play seven conference games in total before the Big West tournament gets started on Oct. 31.